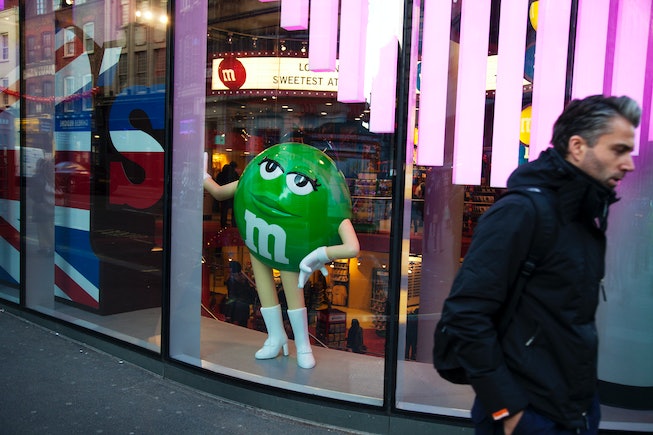 In Pictures Ltd./Corbis via Getty Images

An immense tragedy struck candy isles across America today as Mars announced a sterile rebrand of its M&M characters. The chocolate shells — once full of attitude and good, old fashioned American je ne sais quoi — will be revised for a "more dynamic, progressive world,” which are famously words that mean nothing.

Mars is hoping that the rebrand highlights its characters "personalities, rather than their gender," meaning that one of the darkest realities is coming to fruition: the desexualization of the famously hot green M&M. The candy woman will be stripped of her iconic white go-go boots she’s worn since 1997 for a pair "cool, laid-back sneakers to reflect her effortless confidence," which is the saddest PR-approved jumble of words known to man. Doesn’t Mars know women can be a piece of candy in pristine thigh-high boots with an arresting allure, and be courageous and inspiring? There’s no word on whether the chocolate minx is allowed to keep her matching white gloves or perfectly curled lashes, or if those will get in the way of her journey toward confidence, empowerment, and being boring.

The green M&M has done so much during her tenure as America’s most gorgeous candy shell. Mars can try to wipe the commercials in which she stays charming while her male co-workers melt into literal puddles of chocolate from her sheer appeal, but they cannot wipe her impact from America’s cultural conscience!

Sadly, the rebrand extends to their other characters in the M&M universe, ensuring that everyone is equally stripped of their quirks and air of seduction. The brown M&M, for example, will not only cease her feud with the green M&M, but she’ll also get shorter, more professional heels to make sure that as a fictional representation of candy, no one will ever associate her with the concept of desire. The orange M&M is no longer an anxious wreck, which Mars is hoping be the most relatable to Gen-Z, who they deem "most anxious generation." The red M&M’s Napoleon complex and cheeky cruelty streak is also a thing of the past; he will now embrace his fellow candied friends instead of bullying them within an inch of their shells. The yellow M&M, the beloved doofus of the bunch, seems unscathed at the moment.

Mars is hoping these changes foster "self-expression and power of community," which again, are words that barely mean anything at all. Anton Vincent, president of Mars Wrigley North America, told CNN that the green and brown M&Ms essentially got a promotion with the rebrand, which will equate to prominent placement in ads with the aim of "a little bit more gender balance." The gender balance in question — four M&M guys to the two M&M ladies — is likely to stay as is, since a new character would mean that M&M would have to introduce a new color into the mix. It’s like, okay, and? I know the little freaks at Mars would be beside themselves to create a girl M&M who wore sensible orthopedic shoe and yelped buzzwords. The least Mars could do is turn the Times Square M&M store into a memorial to remember the attitudes, go-go boots, and carnal commercials that once were.