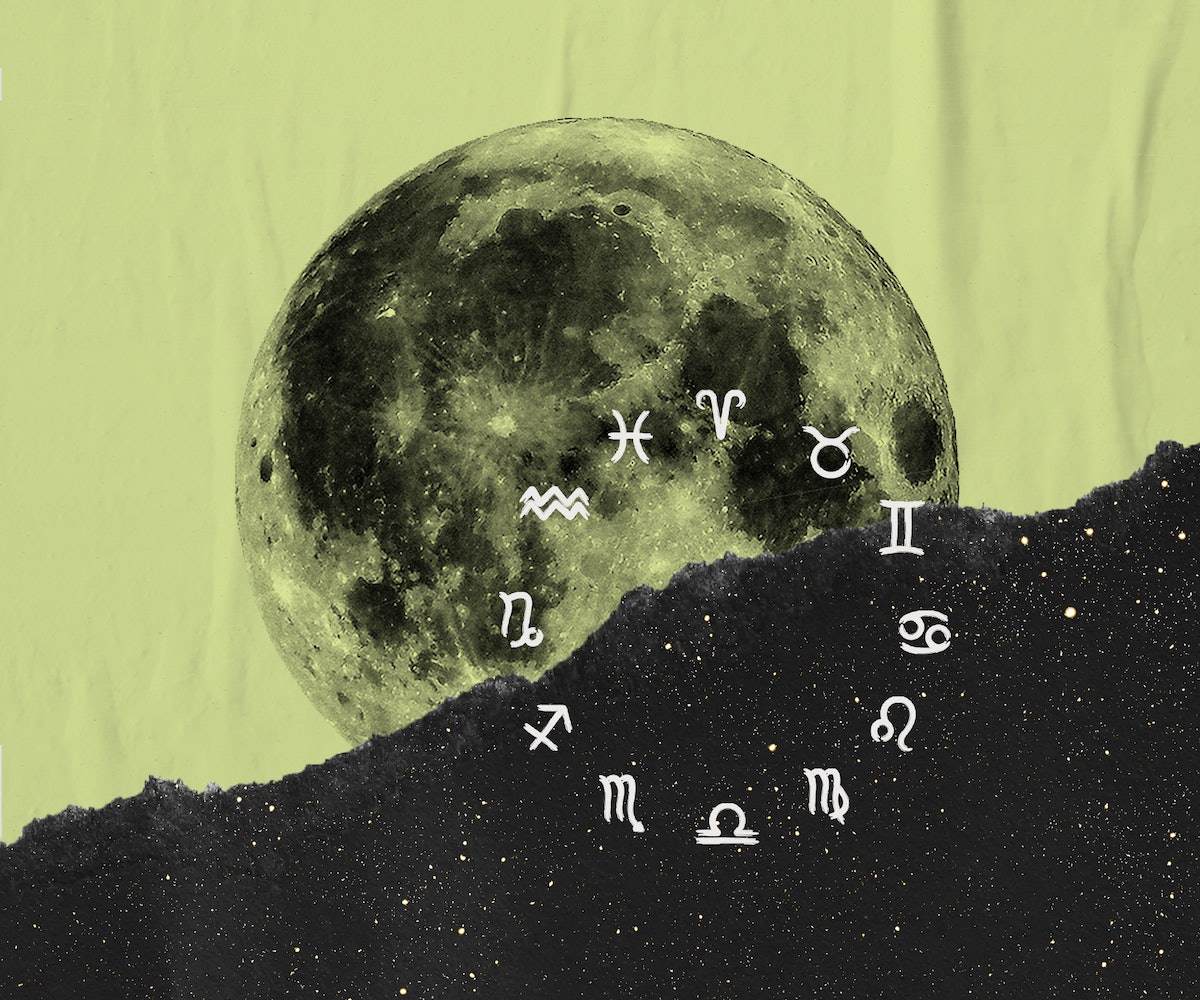 Welcome to the surge months, the high points of the Piscean deluge, a halcyon moment in which no planets are in retrograde, and the bulk of them chill in Aquarius and Pisces. Welcome to Gertrude Stein and Alice B. Toklas’ apartment, Zordon’s command center, Giles’ library. If you’ve been waiting to order spittoons for the ayahuasca ceremony, now’s the time. With Mars and Venus entering Aquarius on March 6 comes a renewed vision, and direction for your year ahead. And as the sun and Mercury barrel through the Piscean kaleidoscope, so do they transmute, mutate, and reimagine what you thought was possible. It’s a dreamy month, at times too hazy for you to see clearly, but you’ll have plenty of chances to regain clarity.

What’s the catch? Glad you asked. The month does indeed begin on a rich note, with the Pisces new moon on March 2 leading us into tomorrow. But any crossing requires sacrifice. On March 3, Venus and Mars, which signify your individual desires, visibility, and drive, meet Pluto the destroyer, who currently guards all passage out of Capricorn’s underworld. Get over what didn’t work out in 2021, and all the ways that you’re not where you thought you’d be for tax or beach season. Leave behind your great expectations, and don’t look back — you might turn into a pillar of sh*t.

With that test completed, you can now enter the fifth dimension. The sun and Jupiter, the biggest bodies in our solar system, combine forces on March 5, awakening new artistic voices. You’re invited to try non-dominant hand-writing, macro-dosing, or to reenact the clay scene from Ghost on March 13, when the sun hits the great cosmic dreamer, Neptune. Don’t try to shape what comes through until the transmission is over. You’ll have the Virgo full moon on March 18 to consolidate and streamline the unceasing transmissions.

If all this Aquarian-Piscean nonsense is getting too heady for you, the sun agrees: The Esalen conference wraps up on March 20, as Aries season introduces action, combustion, and cataclysm into the proceedings. Friction can be healthy! Pisces season has all the open-heartedness of Miss Rhode Island and her fantasy of world peace. But Aries season delivers Gracie Lou Freebush. Now we’ve got a movie.

By the time Venus hits Saturn on March 28, you’ll have spent the last third of the month processing your dreams into practical ambitions and facing the reality of the conflicts and challenges that come along the way. Aries season loves a warrior, so clarity and determination will be rewarded. Put the joint down this last week of March, and make your dreams come true the old-fashioned way. April promises to be the most psychedelic month in recent memory. Lay down some hardware now, so that you can withstand the downloads to come.

Get through the first week of the month and you can do anything. Before exiting Capricorn in your career domain, Mars and Venus must pass through the judgment of Pluto, planet of karmic processing. Hand over any dreams of fame, fortune, and world domination now — it would really be easier if you didn’t put up a fight. With the opening crucible out of the way, the rest of the month promises a positive reboot. As Mars and Venus enter Aquarius on March 6, they inspire a new sense of perspective for your big-picture vision: Why do you do what you do, and who do you do it for? By the time Aries season begins on March 20, you’ll be a gleeful participant in a healthy reinvention.

One way or another, it’s time to get some answers regarding your career. On March 6, Mars and Venus enter Aquarius in your work domain, where they’ll experiment through mid-April. Put these bodies to work through dedicated rituals and physical action. If you can take to the stage, volunteer for the big presentation, or throw yourself into any high-stakes arenas, you’re in for a payoff — or at least some vital data. What are the surprising successes and failures revealing to you? How do they shake up who you thought you were? This is a once-in-a-lifetime year for Taureans. Now’s the time to start taking risks.

You have permission to think big this month. With up to four planets stacking up in Pisces in your tenth house of career and public visibility, there is no shortage of possibilities on what you could do. Naturally, you’ll want to try everything at once — or nothing at all. Here’s how to organize your thinking: Take the first few days of the month to contemplate gates, institutions, and guides. Who can open doors for you? Who is holding you back? Who have you ascribed power to, perhaps inaccurately? Chart a clear course for the latter end of the month, when Mercury hits Jupiter in Pisces and helps you voice your goals. Nothing has to be in your way anymore.

Ready for another purge? It looks like another reality check is in order before you can embrace a productive Aries season. On March 3, Venus and Mars, planets which situate your sense of self, will hit Pluto the destroyer in your seventh house of public visibility. You need to get clear on what you’re projecting to the world: to suitors, lovers, friends, and collaborators. Any old parent dynamics that have creeped into your relationships must be exorcized now. Otherwise, it’s a great month for cognitive reconditioning. When Venus and Mars enter Aquarius on March 6, in your eighth house of metamorphosis, you’re invited to participate in how you want to communicate.

You are not a passenger in your life. This is the month to take hold of your relationships. The four-planet pileup in Pisces in your eight house of ego dissolution wakes you up to the limited roles you’ve assigned yourself (and the complacency of playing the same part eight shows a week). As Mars and Venus enter Aquarius on March 6 in your relationship domain, they arm you with the tools to communicate specifics: Which clear actions can you take to get unblocked? What’s not working at its most efficient? What can you change now, even if it threatens your sentimentality or entitlement? When Venus hits Saturn on March 28, redefinition is guaranteed. Do you want to participate or keep complaining?

Collaboration is critical for you as four planets in Pisces light up your seventh house of relationships through April. Take the new moon in Pisces on March 2 to initiate new projects and team-ups. Confront how you’ve felt stymied, choked, or misunderstood in previous partnerships: What actions can you take to own your part and communicate differently? Once Venus enters Pisces on March 9, it’s off to the races, culminating on March 18 with a full moon in Virgo. The momentum is hot. Collect data and refine as you go. If a collaboration isn’t working, or if you’re feeling unseen, take note and make choices. There’s no stopping now.

Esteemed Libra rising Britney Spears has been on the floor lately, dancing to her own music. How are you expressing yourself? March is the month for vessel-work, as planets move through Aquarius in your fifth house of creative identity, and Pisces in your sixth house of the body. Your assignment is to find release — be it on the dancefloor, stage, or sex-dungeon — and see what emerges. Find artistic ways to process the recent chaos in your home life and relationships (which isn’t settling down quite yet). Get bodied now, so that by the time Aries season launches on March 20 in your relationship domain, you’ll feel strong enough to fight for what’s yours.

Think of March and April as a creative one-two punch as the planets stack up in your fifth house of artistic output, romance, and self-expression. To lay the foundations for expansion, focus on your home life. Mars and Venus enter Aquarius on March 6, followed by the asteroid Vesta, named after the ancient high priestesses. Make your home into a creative incubator and confront the ways that you feel uncomfortable spending time with yourself, with silence, or with anyone who’s in your space. Squares to your relationship domain on March 20 and 22 will reveal — perhaps in messy terms — what you need to feel seen and supported. Address what comes up now. In your life, nothing stays buried for long.

The quotidian proves to be a generator of change for you. Take different avenues on your route home from work, throw surprises into your schedule, and prove to yourself that no aspect of your life is fixed or boring. Evaluate which of your routines are on autopilot, and find new ways to make them feel special. The Pisces full moon on March 2, and the sun-Jupiter conjunction on March 5, go down in your house of home and roots. Invest in your space, and the ways you occupy it. If you can make your home a base, a library, and a garden now, you’ll be able to draw from an infinite bastion later on.

The month begins with a demonic revelation as Venus and Mars meet Pluto in Capricorn on March 3. Venus and Mars wish to bring you to your most vivid embodiment, and, as they cross through the underworld, you’ll confront any shadows of shame and dysmorphia on the way. Slay your past terrors so that the planets can glide freely into Aquarius in your second house of earning and self-worth on March 6. Experiment with how you wear your renewed confidence, how you style and express yourself, and see how you can playfully cooperate in your own makeover. New rewards are coming in. Ensure you’re helping to attract them.

Consider this month as Aquarius Season: The Redux. On March 6, Mars and Venus finally cross out of Capricorn and enter your sign, which means no more waiting in the wings. As planets stack up in Pisces, in your second house of earning, you can ideate on authentic new ways to support and sustain yourself. The last days of the month will help you reconcile with your limits, as Venus and Mars square Uranus in your fourth house of home and rootedness on March 20 and 22. You’re waking up from the blur! Take any shocks as signs of life and any impact as generators of momentum. All that matters is that you’re moving.

March and April offer the richest rewards of Jupiter in Pisces. Get into it. The first week of February deploys a ray of light your way, with a Pisces new moon on the 2nd and the sun and Jupiter aligning in your sign on March 5. If you’re not ready to act, at least take this time to bask in inspiration. Once Mercury shows up in Pisces on March 9, you’ll be able to synthesize your new visions, while the full moon in Virgo on March 18 offers a chance to streamline and organize how you want to bring your dreams to reality — and who you want to come along for the ride.