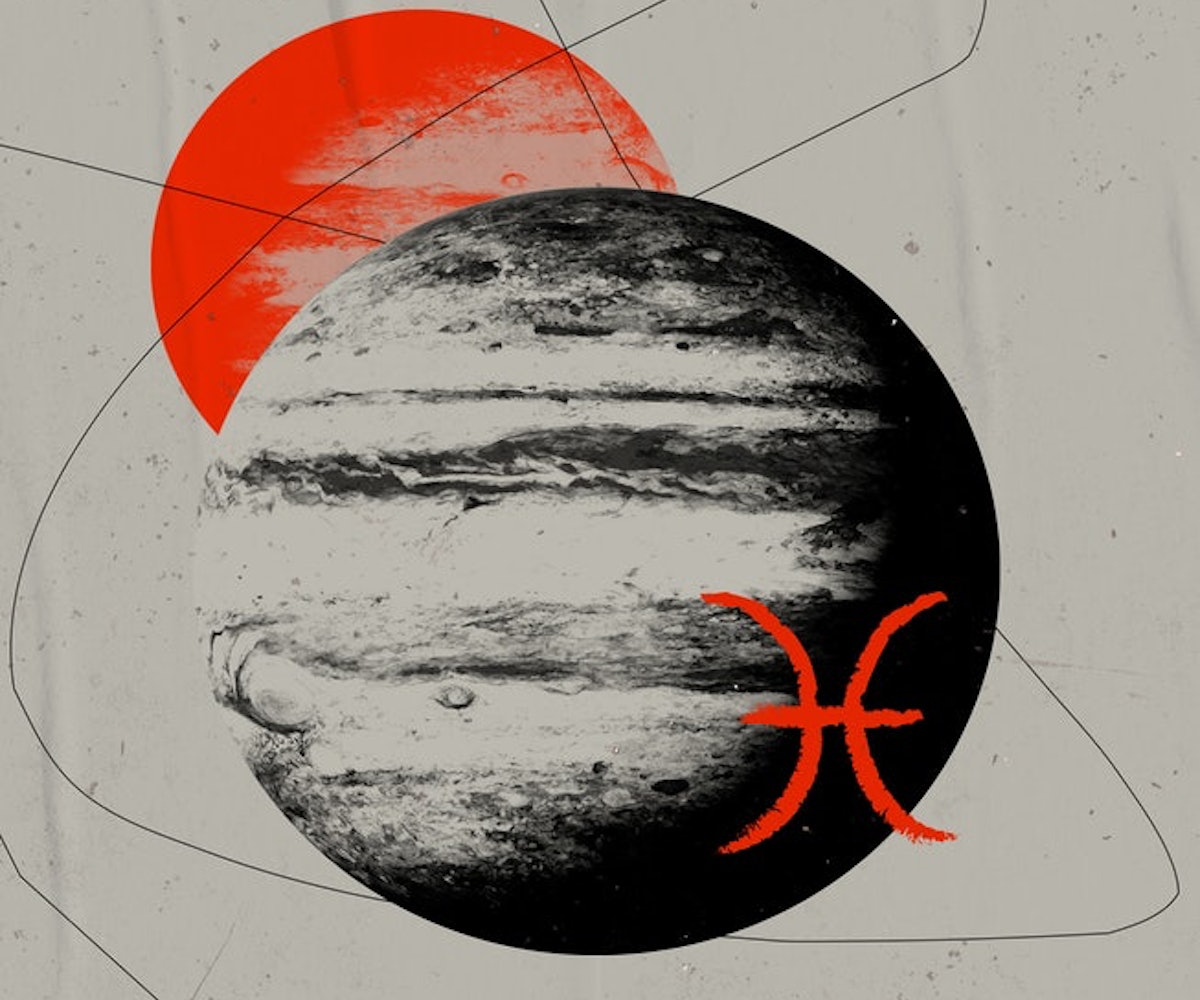 Despite an infernal end to the previous year, 2022 brings with it a new horizon of possibility. As of December 28, 2021, Jupiter, the planet of wisdom and expansion, has returned to its home domain of Pisces, where it will rule for most of the year. Though the year begins in the midst of a Venus retrograde and a mid-January Mercury retrograde, the feeling of restricted freedom can’t last forever. When Jupiter unleashes the power of Pisces, every floodgate is blasted open, initiating a deluge of consciousness, creativity, and imagination. No matter how grim the current forecast, 2022 contains the germs of creation and fruition, of making dreams come true and aligning with the ideals of romance, spirituality, and fantasy.

Jupiter swims through Pisces from December 28, 2021–May 11, 2022, and again from October 28–December 21. From May 11–October 28, Jupiter takes a summer trip into Aries, where it will ride hard on themes of independence, drive, desire, and embodiment. From July 28–November 23, Jupiter goes retrograde, initiating a stall or review of the progress it has made. The ideal times, then, to work with the planet of light and synthesis, are the first seven months of the year, into the mid-summer. For more on how to tap into the year’s biggest awakening, read our Jupiter in Pisces guide below.

The planets closest to the sun, like Mercury and Venus, cruise through the zodiac at a restless pace, completing the twelve-sign-saga within a year, initiating personal changes and developments as they fly. The outer-planets, like Saturn and Pluto, lurch within one sign for several years at a time, marking epochs and generational shifts for the whole populace. Jupiter comes somewhere in between, taking about twelve years to make a full revolution in your chart, at a clip of about a sign a year.

Jupiter is named after the king of the gods, who hurled lightning bolts of intuition from the heavens and roamed freely among his human subjects, seeking coital pleasures and adventure without boundaries. Wherever the planet goes, it’s showtime, with a grand cosmic spotlight on a certain area in your chart. Along with Pisces, Jupiter rules Sagittarius, a sign fixated on the pursuit of knowledge and self-expansion, and so the planet, as its emissary, absorbs experiences and synthesizes them into wisdom. Jupiter brings results, clarity and momentum wherever it goes.

From December 20, 2020 through December 28, 2021, Jupiter has been working with Saturn in Aquarius, a sign concerned with new modalities, technologies and global progress. On a public level, Jupiter has sped up the dissemination of vaccines, information, and new technologies, in an attempt to catch us up with the current world order and the new decade to come. On a personal level, Jupiter has introduced new platforms and structures for creative expression, relationship functionality, and personalized healing. In a sign of originality, Jupiter has helped you cultivate your own idea of how you want to work and design your life.

Remember that moment, in May of 2021, when everyone you know had gotten their second vaccine and restaurants were starting to reopen, when seeing your favorite drag queen live again was no longer an abstract fantasy but a viable possibility? Remember that first trip back into the beach, after a long winter in the dungeon and doldrums? That was the summer preview of Jupiter in Pisces, a brief dip which lasted from May 13, through July 29, 2021, before the big planet had to return to its Aquarian service.

This year follows a similar model with Jupiter launching direct in Pisces, taking a summer vacation in Aries, and returning to its home sign through the fall and into the winter. Finally, Jupiter is back where it belongs — in the final sign of the zodiac, the deep ocean where all the lessons, struggles, and joys we’ve collected filter in and amount to something new. Piscean consciousness has no limits, no boundaries and no reservations. When Jupiter returns here, so begins the Dune spice orgy, and the great communion. After so much time feeling trapped and confined, all the coping mechanisms, spiritual tools, creative diversions, and random conversations begin to connect. You can form a new community now, or a new selfhood. You can begin to make your dreams come true.

It all builds to a spectacular culmination in April, when a smashing five planets go into Pisces, and Jupiter and Neptune, the sign’s rulers, realign in their underwater kingdom for the first time in 50 years. It’s Sofia Coppola season; time to unironically double down into the idyll, to indulge in your creative pursuits, to step through all portals to higher awakening. Back in the city, you’re just another girl in a sweater, but during Jupiter in Pisces season, you’re a vessel for the divine.

On May 11, Jupiter enters Aries, the sign of individuality, drive, and independent momentum. Here through October 28, Jupiter will give us a preview of 2023 and beyond, as the culture shifts from witchy to vampiric. The vibe shifts from Blood Orange to Megan Thee Stallion, from diaphanous to low-rise, and we get to hit it harder. While in Pisces, Jupiter launches us into the realms of the unknown, through the cinematic imagination; Aries drops us back into our bodies, and into the immediate sensation of action and desire. When Jupiter returns here for a longer stay in 2023, you’ll have nearly a year to embrace an entrepreneurial spirit, taking charge in love and career. This moment is a preview, a chance to get behind the driver’s seat of your ambitions.

Jupiter retrogrades into Aries on July 28, continuing its backwards movement into Pisces on October 28, only going direct again from November 23 through December 21. For the last week of the year, it’ll be back on track in Aries, launching us into a bold 2023. That being said, the first five months of the year and the brief December portal are ideal for tapping into the Piscean imagination. As for the Aries drive, set your goals for May, June, and July and fire at all cylinders.

The retrograde period from July 28 through November 23 doesn’t mean that your dreams wither and that the party must end. Think of this retrograde more as a review, a chance to integrate the lessons of the first half of the year — and better yet — to finetune them. Like Zeus himself, Jupiter as a planet tends to act without much accountability, surging forward at a rate it can’t fully manage. A retrograde is a chance to make sure the changes last. In 2023, Saturn will enter Pisces, to give structure to the changes Jupiter has made in your life. Contraction is necessary to expansion. Give yourself time to swim upstream, to see how far you’ve come, and where you’re going next. You’ve got the biggest planet in the solar system behind you. It’ll be worth it.

This article was originally published on Jan. 5, 2022