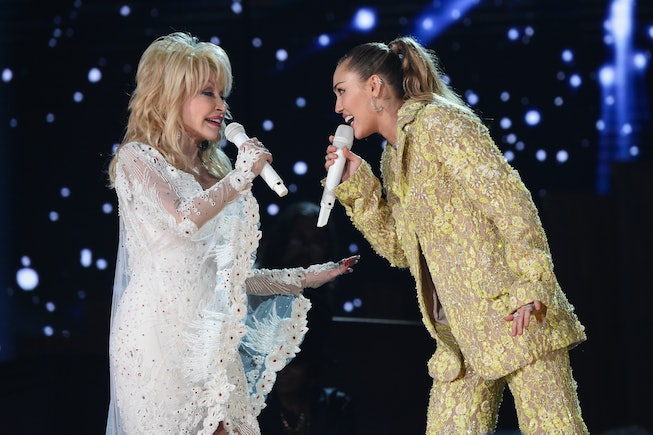 Mariah Carey may be trying to trademark herself as the “Queen of Christmas,” but Dolly Parton is about to gain even more loyal subjects of her own. While it is certainly too early to stop thinking about the beach and start thinking about wrapping paper, we have all been given an early, welcome gift: Miley Cyrus will star alongside godmother Dolly Parton in NBC’s Christmas film Mountain Magic Christmas.

In an ensemble that will attract many a demographic in the United States, Willy Nelson, Jimmy Fallon, That Thing You Do’s Tom Everett Scott, SNL legend Ana Gasteyer, Angel Parker, singers Jimmie Allen and Zach Williams, and Billy Ray Cyrus will also join the cast for the “modern day movie musical.”

The very meta plot of the movie musical will center around the “making of a network TV special,” meets A Christmas Carol shenanigans, exploring Parton’s “desire to uplift an exhausted world's spirits by sharing the unique ‘mountain magic’ she has always found in and around Dollywood at Christmas.”

As she prepares for Christmas, she finds herself taking a journey into her past, guided by the mysterious appearances of her personal Three Wise Mountain Men. “When it's time for her big special to air,” the summary reads, “a renewed and inspired Dolly goes rogue and shows the world that the real magic of Christmas lies in the hearts of the children we all once were, the realization that Christmas is about the people we share it with, and how her faith remains the common thread between Christmases past, present, and future.” Wholesome! Sincere! Everything a major network Christmas special should be.

Unsurprisingly this is not Parton’s first foray into Christmas. Her first NBC Christmas movie was Christmas of Many Colors: Circle of Love in 2016. Last year, she had her Netflix special Dolly Parton's Christmas on the Square, which one Google reviewer said they’ve seen 20-plus times and described as “spiritual.” Parton is also re-releasing her 2020 Christmas album Holly Dolly Christmas, this year, with several new tracks, including "A Smoky Mountain Christmas."

It’s not clear yet when the film is being released, although sometime between Thanksgiving and Christmas feels like a safe bet. In the meantime, we suggest you revisit the 2009 Hannah Montana episode guest-starring Parton, in a cameo that no other Disney Channel show could dream of getting.