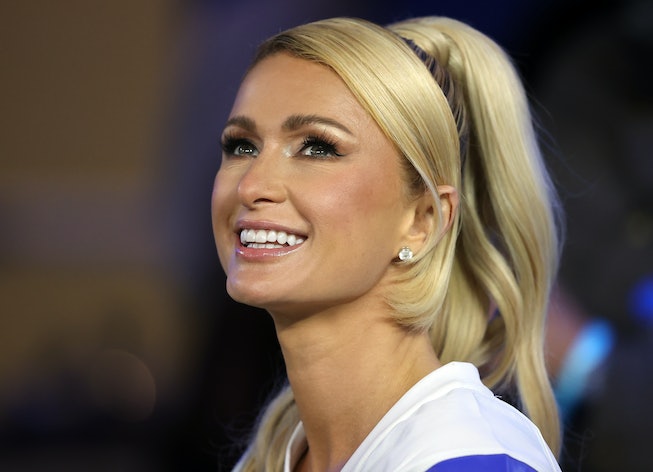 Paris Hilton never stops. After launching her media company 11:11 earlier this year (named for her favorite time of day), along with the shows Cooking With Paris and Paris In Love, the podcast “This Is Paris,” and a tell-all memoir in the works, she’s now created her own island in the Roblox metaverse, where you can catch her DJ set on New Year’s Eve. In a world where Omicron is threatening any remaining NYE plans that typically fall flat anyway, a DJ set from Paris Hilton — who typically makes $1 million for a set — on an island in the metaverse is starting to sound pretty, in her words, “hot.”

According to Reuters, Hilton’s virtual island is called Paris World and has digital replicas of her Beverly Hills home — including its dog mansion — and the neon carnival wedding celebration she and her new husband hosted earlier this year at the Santa Monica pier. You can also rent a luxury sports car or a Sunray yacht, or purchase virtual clothing for a small fee.

“For me, the metaverse is somewhere that you can do everything you can do in real life in the digital world,” Hilton told Reuters. “Not everybody gets to experience that, so that’s what we’ve been working together on over the past year — giving them all my inspirations of what I want in that world.”

As if she hasn’t done enough, Paris has also been getting into the NFT space this year, where she sold three pieces of digital art she collaborated on with designer Blake Kathryn. (Her dogs are also named ‘Crypto,’ ‘Ethereum,’ and ‘Ether.’ Inspiring!)

“The final piece of the digital space is the metaverse,” said her 11:11 Media business partner Bruce Gersh. “ We think that there's a real opportunity for Paris to influence, even at a younger level than who her core customer is. We've built a fantastic, whimsical world that we believe her fans and new fans will just love.”

Paris, much like Britney Spears, is getting a reframe in 2021, when we can look back at shows like The Simple Life and see them for their brilliance. Hilton was always in the joke — and has leveraged her persona for years to build a brand that’s generated an estimated $4 billion in revenue over the past decade, the company said. “I was always in on the joke, but I knew exactly what I was doing,” she told Reuters. “Behind the scenes, I was building a brand.”