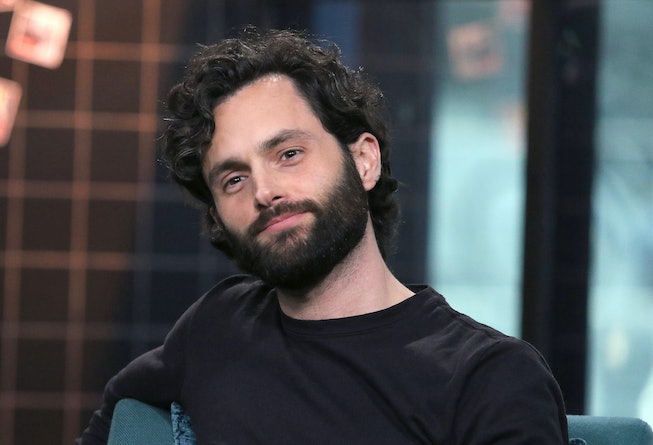 Penn Badgley has made a career out of playing off-putting “nice guy” characters. You know, the ones who bring you flowers or write you poems you never asked for, but then will get jealous when you talk to another guy? We all know a Dan Humphrey: A nice guy with good enough style whose fatal flaw is that they think they’re a nice guy and therefore immune to being as asshole. (Hopefully none of us have a Joe Goldberg in our lives, for obvious reasons.) But IRL, it feels like Badgley is far from the characters he plays — and maybe that’s why we let him get away with murder. Creepy characters aside, Badgley himself is pretty cool. He’s an outspoken advocate for gender-based violence, his dad was once a Green Party candidate for Washington state, and he doesn’t contribute to toxic car culture in New York City.

Badgley’s been in the biz well before he rose to fame playing off-putting love interests — he played a school bully on an episode of Will and Grace when he was 12 — and his body of work extends into teen romance, thrillers, and indie dramas, some that even include singing. Below are some of our favorite Badgley performances — from playing Amanda Bynes’ love interest in What I Like About You to a stalker who not afraid to get his hands dirty (with blood) in You.

In an early role, Badgley plays Amanda Bynes love interest who works at the copy shop. He brings her a latte every day and she has to let him down easy. Sounds familiar! It’s a must-watch if you want to hear him say he’s a “stone cold playa’” before his voice drops. (HBO Max)

When this movie came out, everyone was more famous than Badgley, whose stardom has since eclipsed all of these actors put together — except maybe Arielle Kebbel, who seems to work all the time? Badgley plays John Tucker’s weird little brother who becomes Britney Snow’s lab partner turned love interest, and rocks some long hair that he actually kind of pulls off. (Tubi)

A year before Gossip Girl, there was The Bedford Diaries, a short-lived TV show about college students in a human sexuality class in New York City. Badgley and Milo Ventimiglia starred in it. Our two favorite TV bookworms on one mediocre show? The silence on this is deafening... (Amazon)

In Badgley’s greatest role of all time, he plays Dan Humphrey, whose obsession with Upper East Side It Girl Serena van der Woodsen turns into a real relationship, and a ticket to Manhattan’s elite denizens. Then, like a true writer, Dan cashes in on the whole experience to write a bestselling novel about it. There are a zillion absolutely absurd plot lines in Gossip Girl, and an abundance of online scholarship on whether or not Dan is a “good boyfriend,” but the TLDR is that he created the blog Gossip Girl that constantly attacked his beloved girlfriend and everyone she cared about in life. Men online only cause trouble! (HBO Max)

Badgley plays a son home from college meeting his new stepfather for the first time — and for once, doesn’t play the creepy guy, but instead exposes him! Turns out, the stepfather is a serial killer, in this thriller where Badgley’s intuition saves the day. (Netflix)

Badgley is sweet in Easy A, but he’s also a little weird and always brings up the fact that he and Emma Stone almost kissed when they were kids? He also gives her a ride home and remembers where she lives from carpooling in second grade, which is definitely bizarre. Let it go, man! Anyway, they end up together at the end as they ride off on a lawn mower to “Don’t You Forget About Me.” (YouTube)

Badgley flexes his musical talents in this indie film, where he plays Jeff Buckley, Tim Buckley’s son, who is asked to perform in a tribute show for his late father he barely knew. This is probably a good time to bring up Badgley’s indie pop Brooklyn band MOTHXR, of which he is the singer and keyboardist. (YouTube)

Badgley is a grad student who hires a ghostwriter to write all his papers for a cinema studies class, in this incredible post-Recession indie film that’s a dark academia revenge tale. Get ready for a lot of waxing on the uselessness of a degree. (Tubi)

Half the fun of You is that it’s Penn Badgley. Many a think piece has been written about how Joe in You is Dan Humphrey, and Badgley himself told The New Yorker, “It’s the same role. But now he has blood dripping down his face.” If Badgley must be typecast as creepy nice guys, at least You lets him play around with being truly sinister. You Season 3 can’t come soon enough. Is the baby going to be evil? Which unlucky girl will be his next obsession? Is Love going to get in on the stalking? So many questions! (Netflix)