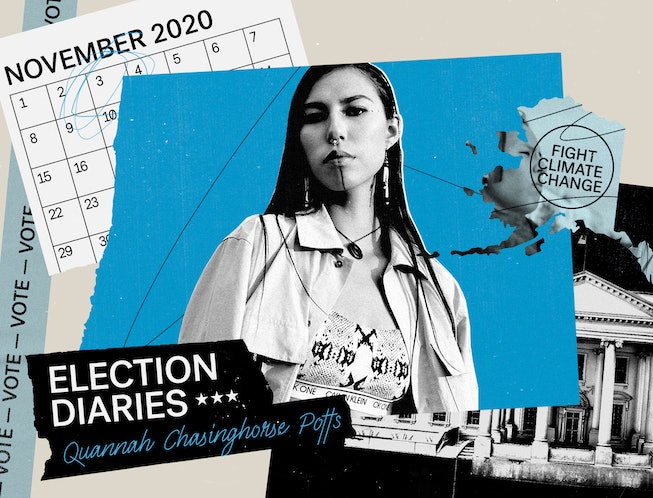 Welcome to NYLON's Election Diaries a new series of political op-eds. Leading up to the 2020 presidential election, we're asking some of our favorite voices in music, fashion, and pop culture to write down their thoughts leading up to this monumental day, including their hopes, fears, and everything in between. Today, Quannah Chasinghorse Potts, activist and tattoo artist, shares how she's feeling about voting for the first time.

"Right now, it's a really critical time. Everyone vote, no matter what. I feel like this year that has to be emphasized. [There are] going to be a lot of people who don't want to vote and we [have to] make sure that everyone casts their vote. And in this time, it's very tricky because we have two people running that I don't think are quite fit for office, but I think we need to start voting for the people. Now it's all about the people. You can't just look out for one candidate and think that there's going to be good, positive reinforcement all the time. You have to be careful, but you do have to remind yourself who's going to be more for the people and support the people in what we want, and what we believe our future generations should endure because there's a lot of stuff going on within the climate crisis within protecting the land from extracting oils.

It ties into so many other things. I feel like we need to start focusing more on what we can do as a people to ensure that future generations get the privilege to live our ways of life. And that goes for anyone and everyone to continue to live and thrive and not have to worry about the threats that we're going to have to face. I think that the youth these days are really rising. With this election we're going to have a great turnout of first-time voters, including myself. I'm pretty excited. Voting this year is extremely critical and very important. No matter what election, [it's] always important, but this year we need to make sure we get as many votes, if not all, as many as possible for the election.

I grew up in the movement, my mom and my aunties and all the women in my life...their work is in the movement, indigenous sovereignty and whatever comes with that. I guess my main concentration would be on climate justice, missing and murdered indigenous women, and stopping the oil and gas industries from drilling in sacred lands. So just protecting the lands and waters, those seem almost different from each other, but they're also very interconnected. I think that's why I fight so hard and so strong on these issues, because it's not just one issue, it's all interconnected. There are some solutions out there if you just listen to the people. I know there's a lot of really smart people out there who are passionate as well and know this work and have been working endlessly and tirelessly on these issues. We need to start giving more representation to those native communities that are on the front lines.

I'm nervous about the election. I'm not quite sure how it's going to go. I think everyone's really on edge about this election, but after I'm definitely going to be doing a lot of work around these issues — there's already some things lined up for me and some upcoming projects that I wanted to work on, a few things that I think would be necessary for our people to keep moving towards the solutions that we coming up with and putting together. The more you fight, the harder we fight, the more change and the more people want to educate themselves on these issues.

That's my big thing. It's making sure that people are educated on the issues. It's sad to know that not a lot of people know about what's going on up here in Alaska and that there's even native people up here. We did an evaluation of young people from the ages of 13 to 24; we asked all of them across the country if they knew anything about Alaska, that there are Alaska Natives, and there were a lot of issues up here in that it's known as ground zero for the climate crisis. Only 13 percent of all of the young people that were interviewed had any idea about Alaska natives up here. It shows how excluded we are. Alaska seems so far away and so different from the rest of the country and so big. It can be hard to really get the representation we need, but we're getting there. It's an ongoing process.

I think it's really important that youth are educated. That's where it's going to really start — just making sure that people everywhere understand what's going on up here in Alaska. They can't forget that we're a part of the country. There's always so much focus on what happens in the lower 48. I feel like there's not enough coverage on what goes up here in Alaska.

A lot of youth reach out to me and they always want to do something. They're like, 'You're inspiring, I really want to do this work. I really want to use my voice, I just don't know how I don't have the resources.' So we start equipping them with resources, websites to check out if they want more education and want to be more familiar with the work. Just start speaking, not only just with other youth on these issues, but elders as well, and the people around you. Start getting involved in your own community, making sure that you're doing what you can for your community. There's a lot of resources in there, like donating, and there's always different webinars and different things that people can check out. It really goes on from there, depending on what you personally would want to do, how much effort you want to put in this kind of work.

NEXT UP
Life
Away’s Second Designer Collection Will Have You Traveling In Style
Life
TikTok Toasts To Latinx Heritage Month & More Party Photos You Missed
Life
How To Dress For Your Birth Chart, According To An Astrologer
Fashion
Milan Fashion Week Was Filled With Peak Nostalgia Moments