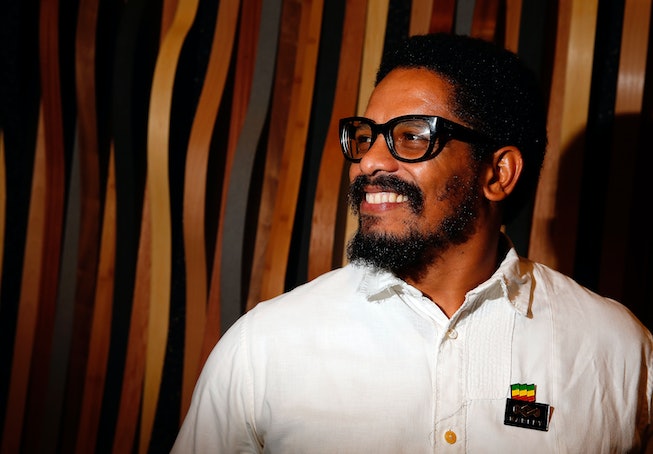 From Jay-Z to Martha Stewart to Justin Bieber, celebrities love their own cannabis brands almost as much as they love lending their names to skincare, exercise, or non-alcoholic beverage companies. The latest to join in on legal cannabis is Rohan Marley, son of Bob Marley, who partnered with former NFL player Mike James to start Lion Order, a cannabis and CBD lifestyle brand that, along with cannabis, will sell clothing and luxury accessories.

While cannabis aesthetic tends to fall on two sides of the spectrum: one side being blacklight-fuzzy poster-basement-stoner and the other being minimalist-DTC-terrazzo, Lion Order seems to strike a balance between the two, incorporating both Marley’s Rastafari heritage and being the kind of bud that looks good on Instagram so you can charge more for it than that guy TJ you bought from in high school charged you.

Marley announced the company on February 22, which is considered an auspicious day for those inclined towards numerology. “Today, on 2.22.22 we are announcing Lion Order’s intentions on this historic day of alignment and synchronicity,” Marley said in a statement. “Lion Order is a movement to return to nature, a return to King of self and shift in consciousness that comes from the Earth.”

You can start buying Marley’s weed on April 20 (nice), when the company’s own Lion Order IP strain will be available in over 30 dispensaries in Michigan, which legalized cannabis in 2018. It will be available in eighths of flower across three strains, as well as pre-rolls, concentrates such as Jamaican style hash, live rosin, and vapor pens, and a CBD/THC topical sports cream for athletic recovery. On April 20, Marley will also announce where his products will be available next.

No word yet on the prices, but we can hope Marley is going to be more generous than Bieber, who sold his .5 gram baby joint pre-rolls for a whopping $7 each.

“I partnered with Heavyweight Heads because they grow some of the most quality and best herb I’ve ever tasted. But most importantly, they share Lion Order’s vision of unity and they grow their herb with the respect it deserves on a Rastafari level,” Marley said. “I am overjoyed to bring the Lion Order movement center stage to this industry and advocate for the plant in its rightful way like my father did before me.”