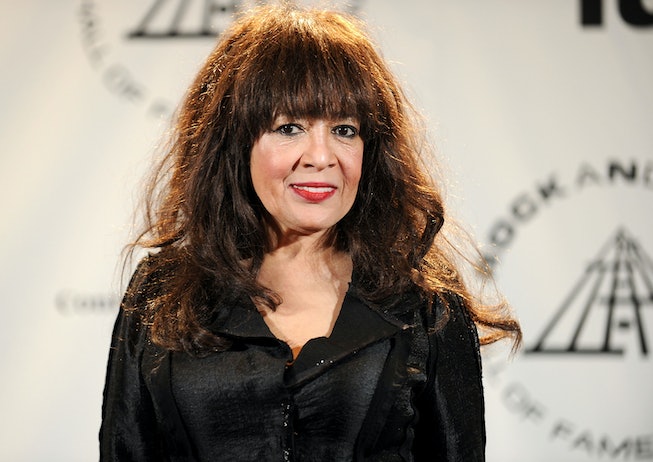 We’ve lost a lot of icons in the last month: bell hooks, Eve Babitz, Joan Didion. Now, Ronnie Spector, 60s music icon and lead singer of The Ronettes has died at the age of 78 after a brief battle with cancer, as reported by The Associated Press.

“Ronnie lived her life with a twinkle in her eye, a spunky attitude, a wicked sense of humor and a smile on her face. She was filled with love and gratitude,” her family said in a statement to The AP.

Spector, born Veronica Bennett in Manhattan’s Washington Heights, is most known as the frontwoman for the girl group trio The Ronettes, which she formed with her sister and cousin. But what she’ll forever be remembered for is her chill-inducing croon — most known from the 1963 Ronettes song “Be My Baby” — that conjures longing, winged eyeliner, beehive hairstyles, and harmonies so neatly stacked you feel like you could burst into tears. She was an influence to everyone from David Bowie to to Bruce Springsteen to Billy Joel, the latter who wrote a “Say Goodbye to Hollywood” in Spector’s honor to Amy Winehouse, who cited her as an idol.

The group went on to release hit tracks like “Baby, I Love You” and “Walking In The Rain” and tour England with The Rolling Stones. “The first time I ever went to heaven was when I awoke with Ronnie Bennett asleep with a smile on her face,” Keith Richards wrote of their affair in his memoir Life. “We were kids. It doesn’t get any better than that.”

Tributes from other musicians have been pouring in on Twitter, including from Brian Wilson and Stevie Van Zandt, who wrote that it was an honor to produce her. “I loved her voice so much and she was a very special person and a dear friend,” wrote Wilson on Twitter. “This just breaks my heart. Ronnie’s music and spirit will live forever.”

“We weren’t afraid to be hot. That was our gimmick,” Spector said in her 1990 memoir Be My Baby: How I Survived Mascara, Miniskirts And Madness, which is advice all of us can pocket for the rest of our lives. She also talked about the importance of style to her early career, particularly embracing the look she was born with. “The louder they applauded, the more mascara we put on the next time,” she wrote. “We didn’t have a hit record to grab their attention, so we had to make an impression with our style. None of it was planned out; we just took the look we were born with and extended it.”

Spector’s memoir also included stories from her unhappy and harrowing marriage to producer Phil Spector. The two married in 1968 and divorced in 1974, approximately two years after she escaped from their Beverly Hills mansion in which she was all but locked away.

Spector was inducted into the Rock and Roll Hall of Fame in 2007 and went on to release music until her last album English Heart in 2016, which featured her covers of songs from Britain in the 60s.