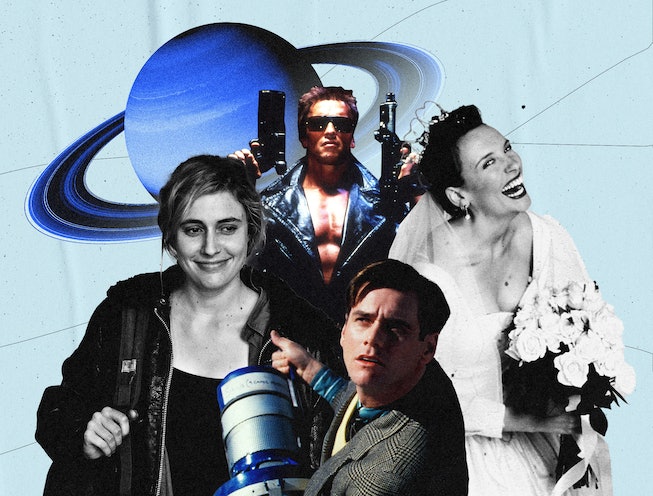 No astrological transit warrants as much attention — and dread — as the Saturn return, a three-ish year crossroads in which Saturn completes a full revolution in your chart, and sets off a cosmic-scale review of your life. Though you may experience up to three Saturn returns in your lifetime (late twenties, mid-fifties, and late eighties), it’s that first showdown, at the end of our prolonged childhoods, that often commands the most tempestuous reckonings. Naturally, stories about beautiful, lost twenty somethings growing up late abound in cinema, a medium which demands harsh conflict and immediate metamorphosis from its characters. We run down the most grueling, cathartic, and inspiring Saturn returns depicted on the silver screen. Let these survivors guide you through your own Götterdämmerung to come.

Saturn loves nothing more than a training montage, in which doughy young protagonists must undergo punishment, and display perseverance, before they can meet their destinies. Before Luke can face his father in the ultimate Saturnian battle royale, he must study with the ancient master Yoda on the swamp planet Dagobah. Though Saturn’s presence abounds in all manner of cinematic masters, from Pei Mei in Kill Bill: Volume II to Apollo Creed in the Rocky movies, it’s the shriveled, sardonic Yoda who sets the bar, forcing Luke to accept hard truths and complex dualities.

“Sometimes to do what’s right, we must be steady,” Peter Parker tells his mentor-turned-nemesis Doctor Octopus, “and give up the things we desire the most — even our dreams.” Woof. As the bridge between the personal and collective planets, Saturn gets us in shape so that we may be of service to the masses. To answer our higher calling, we must often relinquish the dreams of a normal, easy life. When Peter Parker ditches his web-slinging alter ego, he gets a chance at happiness, stability and maybe even love. But at what cost to his destiny? As Peter surrenders to Saturn, he reawakens to his purpose, and, in a new life of conceding to his limits, gets his first real chance at an authentic relationship.

Truman Burbank never questions the perfection of his idyllic small-town life, until the glitches become harder and harder to ignore — set lights falling from the sky, unsolicited product placement from his loved ones, and violent storms which conveniently prevent him from ever leaving. Now Truman is rattling the cage, scratching the surface of the truth: His life is a TV show, one engineered for corporate gain and mass consumerism. To escape a fabricated life, Truman will have to burn down his marriage, his job, and his construction of reality. For those willing to walk through the fire, Saturn offers freedom from the Matrix. Who said liberation came easy?

Though we’re technically adults by age 18, it takes many of us a bit longer to leave the nest. Akeem (Eddie Murphy), the prince of Zamunda, has never had to do anything besides traipse around the royal palace and cosign his parents’ pick for a royal bride. Staging his own inverse Rumspringa, Akeem leaves it all behind, electing to experience real living, in the grime and grit of Queens, New York. The metamorphosis from royal prince to fast-food janitor isn’t necessarily smooth, but the connections Akeem forms, and the wisdom he cultivates — without his parents’ pampering — teaches him more than any patrician education could offer. Saturn loves restriction, scarcity, and severity. Why not see what’s on the other side of a sheltered life?

At the start of The Godfather, Michael Corleone (Al Pacino) has left the ways of his Sicilian family behind: joining the army, getting an education, and even bringing home a nice WASP girlfriend. His father, Don Vito Corleone, may be the big poobah of organized crime in New York, but Michael’s nothing like him. Right. Saturn embodies the archetype of the father, the figure of power we fight in fear of becoming. As Don Vito’s reign comes to a violent end, Michael finds himself embracing his true destiny — as the next head of the family — and even relishing it. We may spend our twenties on the run, forcing ourselves into twee obscurity to avoid becoming our parents, of commanding money and power in a way that’s morally complicated. But there’s only so far you can go before Saturn finds you and forces you to claim authority. How you use it is up to you.

If her life carried on in placid passivity, Thelma (Geena Davis) would stay stuck in her small town, dissociating from her deadbeat husband. But when her best friend Louise (Susan Sarandon) takes her on a road trip, the two encounter unexpected horror, and from it, ultimate liberation. Hitting the road as outlaws, Thelma and Louise escape into an open horizon beyond the confines of their gender. “Something’s crossed over in me,” Thelma tells Louise. “I can’t go back. I just couldn’t live.” The awakening of a Saturn return isn’t meant to be tidy or convenient. It’s often a package deal, of revelation at the price of trauma. But for those unwilling to go back to sleep, to accept complicity or complacency, there’s only one choice: Keep driving.

Saturn is the planet of age, and often takes form as an older mentor, teacher, or lover who leads us to our purpose. At the start of their affair, Jackson Maine (Bradley Cooper) exposes his ingenue lover Ally (Lady Gaga) to the big time, unleashing her talents to the masses and setting off her career. But, inevitably, Ally fulfills her potential, and no longer needs the guidance of her wise, washed-up partner. When Saturn comes into our lives, it’s meant to make us grow, but not necessarily to stick around forever. Learn what you can, but never curtail your evolution, no matter who you have to lose along the way.

Sobriety leaves a lot to be desired. Much of the malaise driving Renton (Ewan McGregor) to heroin is a false binary: Choose either a life of dull, deadening consumerism, or the rapture of annihilating substances. But as Renton and his buddies get older, their habits become more glaring, and the comedowns more devastating. One way or another, when Saturn returns, the party is over. What if your bad behavior isn’t cute anymore? By the time Renton has walked away from his loser crew, he’s ready to accept the quotidian misery of being alive, being human, and being an adult.

Saturn is the planet of responsibility and sobriety; its easiest targets are those who succumb to toxic protagonism—casting themselves as perpetual victims, heroes, or martyrs to avoid taking accountability for their actions. Muriel Heslop was a nobody from the provincial bog of Porpoise Spit: unemployed, sitting in her room listening to ABBA records, dreaming of the wedding day that would make her into something. To take her life into her own hands, she does whatever it takes, including stealing money from her family, changing her name to “Mariel,” and arranging a storybook wedding with a man who doesn’t want her. “I’m not her anymore,” the new Mariel tells her friend Rhonda. “I’m never going back to being her again: stupid, fat and useless.” Of course, the sham collapses, and as Muriel begins to take responsibility for the serious consequences of her lies, she finally stands with the poise — and power — of someone who can face reality. When Saturn tests Muriel’s dreams, it breaks her delusions, finally setting her free to be an adult.

In the near future, humans will be hunted en masse by an army of intelligent, homicidal robots; our only hope is the rebel leader John Connor, and his warrior mother Sarah. But in the present, Sarah is a dazed diner waitress, a nobody, entirely unaware of her destiny. When one of the robot killers of the future — a Terminator — travels back in time to kill Sarah, she is forced to flee, hide, and ultimately face mortality head-on. No greater Saturnian archetype exists in cinema than the Terminator, an invincible, emotionless metal endoskeleton, sent to demolish your complacency until you’re in fighting shape. “It can’t be bargained with,” Sarah is warned by her baby daddy. “It can’t be reasoned with. It doesn’t feel pity, or remorse, or fear. And it absolutely will not stop, ever, until you are dead!” By the time we meet Sarah in the masterpiece Terminator 2, she’s embraced her destiny as Mother Mary of the Robot Apocalypse, a jacked one-woman army more tenacious than any Terminator. This time, if Saturn returns again, she’ll be ready to hit back.

A Saturn return often feels like a severe awakening, from a coma of complacency; suddenly, you’re alert and aware of the life you live, the people you surround yourself with, and the values you espouse, especially when they don’t inspire confidence. It’s time to look in the mirror and ask: Is this really who I grew up to be? This reckoning is brilliantly dramatized by Jennifer Garner, playing a 13 year-old suburban girl flung into her own future as a Manhattan magazine power-bitch. Though her fashion is excellent, Garner’s Jenna has lost her way, giving in to cynicism, betrayal, and corporate savagery. As she reclaims the innocence, joy, and originality of her inner child, Jenna relinquishes an empty lifestyle and course-corrects her destiny. When Saturn returns, it wants you to return with it, and rediscover who you always were.

“I’m so embarrassed. I’m not a real person yet.” At age 27, Frances is a bit all over the place. She’s a dancer who doesn’t really dance; she’s hung up on her best-friend Sophie, who has moved on to a long-term relationship; and she can’t make the bed, let alone pay rent. In the meantime, she’ll dance in the streets, burn through friends, roommates, lovers, and credit cards, and find her way, her own way. Frances’ arrival at authentic independence doesn’t take shape as a climactic a-ha moment, but through trial-and-error, humiliation, experimentation, and optimism. Some Saturn returns are immediate and severe; others feel like an endless mess. Life may never get cleaner, but eventually, all those experiences pile up into something like wisdom.

NEXT UP
Culture
The Madonna Biopic Is Being Scrapped
Culture
Kaia Gerber Won’t Stop Until She’s Cast As Patti Smith In A Biopic
Culture
The 2023 Oscar Nominations Full List Is Here
Astrology
February 2023’s Full Snow Moon in Leo Embraces The Real You
Style + Culture, delivered straight to your inbox.