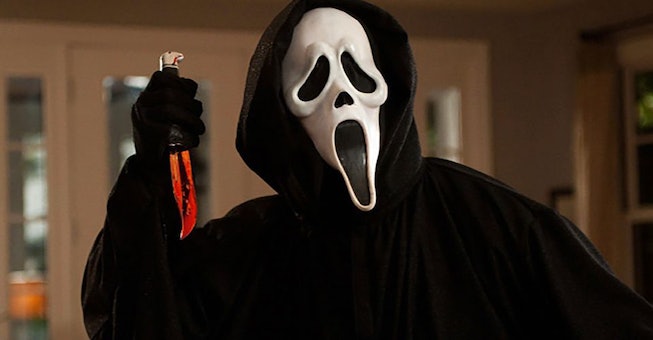 Do you like scary TikToks? The app is imbuing its text-to-voice options with the spirit of Woodsboro, adding the ability for creators to add Ghostface’s petrifying voice from the Scream franchise to videos with a new text-to-speech feature.

Much like in the original Scream film, the feature’s promotion starts with Ghostface setting its sights on Drew Barrymore, who played Casey in the 1996 film. “Hello Drew Barrymore. It’s not the 90s anymore, put the landline away. I’m in your TikTok,” it says. Barrymore responds in the only way a seminal Scream star knows how: that she’s dating a football player who’s “really big” and who’s going to make a TikTok to beat up Ghostface’s TikTok. The Scream universe can’t help but be meta. Ghostface, a seasoned stalked, knows that Barrymore is single, but leaves her alone once she confirms that David Arquette, aka Deputy Dewey Riley, is also on the app.

In his own TikTok, Arquette tries to come for Ghostface’s gig by asking the eternal questions: Do you like scary movies? Obviously, the slasher is not down with this. That’s its bread and butter for over 20 years! “Who do you think you are? I ask the questions around here,” says Ghostface. “I hope you like scary movies. You’re in one.” The people of Woodsboro cannot catch a break.

TikTok makes using the Ghostface text-to-speech feature extremely breezy, and even offers a tutorial. Just type record a video, type text, and look for the avatar with a terrifying, hooded Ghostface, and you’ll be set to scare all your followers, friends, and loved ones.

Outside of Ghostface’s new reign of terror on TikTok, there’s no shortage of Scream in culture right now. The original house from the first film is being repurposed as a spooky, Halloween weekend AirBnb, and everyday there’s new information about the forthcoming fifth installment to the franchise, also named Scream. The film’s trailer brought back Scream OGs like Deputy Riley, Gale Weathers, and Sidney Prescott, along with a slew of newcomers ready to be face Ghostface’s renewed wrath.

"Nearly 25 years ago, when I wrote Scream and Wes Craven brought it to life, I could not have imagined the lasting impact it would have on you, the fans," wrote Scream screenwriter and now executive producer Kevin Williamson in November 2020. "I’m excited for you to return to Woodsboro and get really scared again. I believe Wes would’ve been so proud of the film that Matt and Tyler are making. I’m thrilled to be reunited with Neve, Courteney, David and Marley, and to be working alongside a new filmmaking team and incredible cast of newcomers that have come together to continue Wes’s legacy with the upcoming relaunch of the franchise that I hold so dear to my heart."