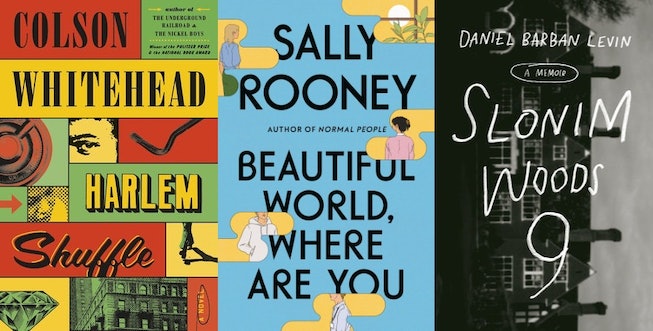 It’s been quite a summer: one filled with tinned fish, Olivia Rodrigo, general hedonism, The White Lotus discourse, record temperatures, the milk crate challenge thing, the reemergence of literally every Y2K trend, Lorde’s confusing Old Navy commercial-esque music video, and constant disappointing news in the ever-unfolding DaBaby fiasco. Whew! Does anyone else need a break? September feels like it’s a good time to recenter, to get a little softer and to embrace a little more slowness in preparation for the cooler weather ahead. (Plus, it’s just like when you had to go back to school — how’s that for a little nostalgia?) Fortunately, the upcoming September 2021 book releases offer a slew of reasons to cancel plans.

On the docket, we have the highly-hyped new novel from Sally Rooney: Beautiful World, Where Are You, which will certainly keep you page-turning in bed for a few days, especially if you want to get in on the Twitter #discourse that’s sure to come. Or if you’re looking to dive into something more stressful, or salacious (however you tend to embrace chaos), there’s also Slonim Woods 9, the thrilling memoir from Daniel Barban Levin, who was a member of the infamous Sarah Lawrence cult.

Read on for 10 September books we’re excited about that can help you take things a little slower — at least, for now.

Beautiful World, Where Are You by Sally Rooney - Farrar, Straus and Giroux, September 7

Noted polarizer Sally Rooney is back with a new novel, this one, like Normal People and Conversations With Friends, also about mildly depressed people in their 20s in Ireland in loosely dominant-submissive relationships. Beautiful World, Where Are You is primarily told through two best friends’ emails to each other, where they explore light topics like morality, the end of the world, and the commodification of art — and it has both a self-effacing rawness and a hopefulness that make it a headier, but ultimately more satisfying read than Rooney’s first two novels.

Just over two years ago, New York Magazine published one of those stories that commands your Twitter feed for three days. This time it wasn’t about the wrath of Park Slope preschool moms, but about a cult that had been formed by Larry Ray, a parent of a student at Sarah Lawrence that had kept several students in its grip for years. Now, Levin, who was one of the students in the cult, releases a biting, observant memoir about his experience, as he excavates the reasons he was so drawn into Ray’s grasp.

Maggie Nelson’s books crack your heart open on a marble countertop and piece it back together, but not before you’ve thought critically about your entire life. Her writing leaves you smarter, even if it sometimes contains truths that are hard to swallow. Her latest work is an essay collection that meditates on the concept of freedom, drawing on ideas from pop culture and critical theory, which is sure to explore your brain in the best way.

Cue the psuedo-climate novels, where climate change is, like in our own lives, contributing to, and the omnipresent backdrop of our emotional conflicts. This one, though, has some humor. It’s a tale as old as time: L.A. is in a drought. The father, harboring a secret, becomes increasingly obsessed with the Weather Channel; the mom feels like he has to divorce him, and the three daughters have to deal with all of the emotional fallout of the collapse of their family and the secrets that bind or destroy them. Cue the Lana Del Rey!

In this debut memoir, a civil rights lawyer recounts moving to New York City from China at the age of seven and growing up in Chinatown, where her parents work in sweatshops. She discovers the movie-magic moments of New York City, like the Rockefeller Tree and slices of pepperoni pizza, but she’s isolated at school, her mom becomes sick, and she’s told to always tell people she was born in the U.S.

Jose Vadi writes seven essays about California, both historically and in terms of the state’s connection to his own family history, spanning characters from a laid-off tech worker to the grandson of Mexican farmworkers, in this debut essay collection that serves as an ethnography and meditation on the Golden State. Again, cue the Lana del Rey!

Colson Whitehead, author of the much-acclaimed The Nickel Boys and Underground Railroad, which won, like, every award and whose covers you’ve certainly seen around a New York Times Book Review, is back with his third novel. Harlem Shuffle is part heist, part crime story, and part love letter to the neighborhood, set in 1960s New York City.

My Darling From The Lions by Rachel Long, Tin House, September 21

This debut book of poetry that has been cosigned by Magical Negro author Morgan Parker is being republished by Tin House this month. It’s poetry for the modern world, told in three sections, covering growing up, falling in love with “not-great men,” and girlhood, and talks about sexual politics, Black identity, and divinity.

Kasischke’s twelfth poetry collection has a line in it that I can’t stop thinking about: “When a bolt of lightning falls in love/with an old woman, sex is reinvented/as the world’s first toaster oven.” Kasischke’s poetry contends with domestic and familiar and always serves gut-punch lines that leave you with more questions about the world, but nonetheless satiated. Bonus fact: Kasischke also wrote The Life Before her Eyes (2002), which was made into an Uma Thurman movie.

Please Don’t Sit on My Bed in Your Outside Clothes by Phoebe Robinson, Tiny Reparations Books, September 28

The comedian and host of the 2 Dope Queens and Sooo Many White Guys podcasts, Phoebe Robinson, is back with her third book of essays, this time about quarantining with her boyfriend (British Baekoff, to the uninitiated), performative allyship and her decision to not have children. While we’re here, do yourself a favor and get a little Phoebe boost in your day: Go read any of her #ThirstyThursday Instagram captions where she goes off on the hotness of Paul Rudd or Milo Ventimiglia. I dare you not to laugh out loud.

NEXT UP
Life
The Marilyn Monroe Biopic Director Says ‘Blonde' Will “Offend Everyone”
Entertainment
Deuxmoi Show, 'Anon Pls,' Coming To HBO Max
Life
Margot Robbie Could Replace Johnny Depp in Pirates of the Caribbean
Life
I Tried BeReal, But Was I “Authentic” Enough?