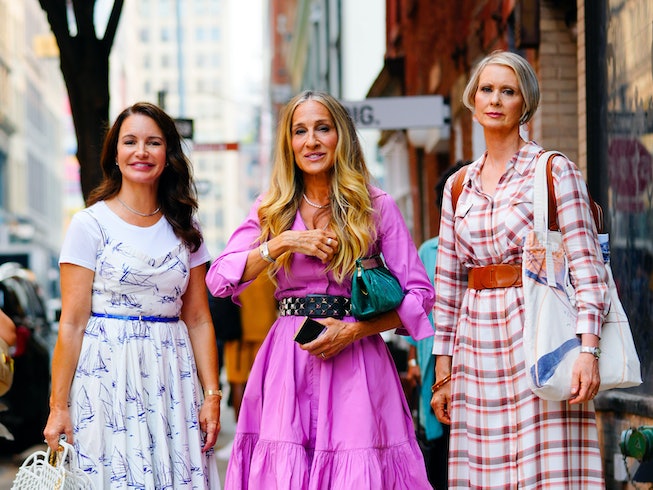 If there wasn’t already enough drama around the Sex and the City reboot, And Just Like That..., now, apparently part of the script leaked — revealing some major plot points around the continuously tumultuous romance of Carrie Bradshaw and Mr. Big.

First of all, Carrie is now in her 50s and playing a podcast host, which will make for some truly dark television. And perhaps unsurprisingly, given Carrie and Big’s chronic anxious-avoidant attachment styles and the fact that he left her at the alter during their wedding in the Sex and the City film, everyone’s least favorite couple is in the middle of a divorce in the reboot. (This also means SJP will have two separate HBO series about divorce, because we are all living in Noah Baumbauch’s world.)

According to Page Six, in the show, Carrie and Big have split and are fighting over finances. In the leaked scene, over brunch with Charlotte and Stanford (who was never invited to brunch before Samantha wasn’t in the reboot), Carrie tells them: “I was taping the podcast, I was washing my hair. Yes, I wasn’t eating or sleeping, but at least I felt good about my marriage. Now I’m just one of the wives he was taking care of?”

She’s of course referencing Big’s two ex-wives: Barbara, the book publisher who almost publishes Carrie’s book about a magic pack of cigarettes, and Natasha, who famously cannot spell. Bridget Moynahan, who played Natasha, was spotted on set in Soho on Monday, teasing her likely return.

We don’t know many other details about the reboot’s plot, but it has been confirmed that they wrote out Samantha because they grew apart as friends, which is deeply upsetting, that Sara Ramírez, Nicole Ari Parker, Sarita Choudhury, and Karen Pittman will join the cast, that Charlotte will have a French bulldog (RIP her Cavalier King Spaniel, Elizabeth Taylor), and that the show will, disappointingly, address the COVID-19 pandemic.