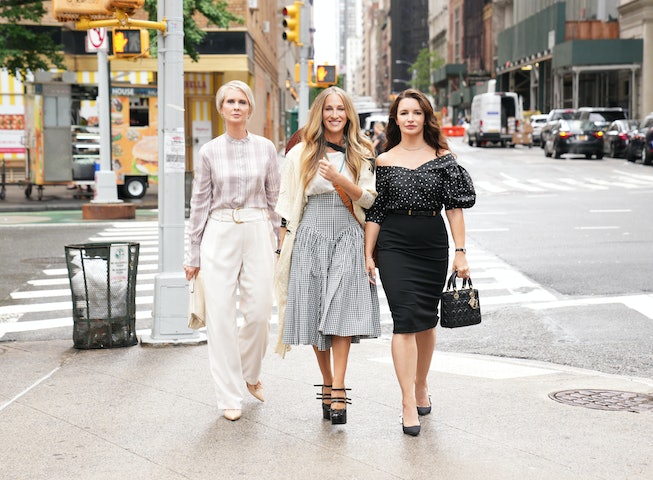 Sex and the City’s upcoming reboot, And Just Like That, is due to hit HBO Max on December 9th, just in time for holiday watching. In addition to Sara Ramirez’s character Che Diaz — the first nonbinary character in SATC history — Sarah Jessica Parker, Kristin Davis and Cynthia Nixon will all reprise their original roles. (Christopher Noth will also return as Mr. Big — because apparently if Carrie can’t have peace, we can’t either.)

Here’s everything we know about the Sex and the City reboot so far:

The first trailer for And Just Like That dropped Friday, November 12th and gives a glimpse into the coming season, and a second, longer trailer dropped on Tuesday, November 30th. Carrie, Miranda and Charlotte are all back, waiting for a table for brunch, gathering together for wine at the park, meeting and shopping with new friends, and living in the city that always reinvents itself. Carrie is a podcaster, Lily is in her late teens (!), and Miranda knows that “having it all” is “really hard.”

Watch both trailers, below:

Who is behind the Sex and the City reboot?

Comedian and novelist Samantha Irby, Black Lightning writer Keli Goff, and Fresh Off The Boat former executive producer Rachna Fruchbom have all been brought on to write And Just Like That. The three POC writers will join showrunner and executive producer King, along with veteran writer Elisa Kurtisky. Together, they’re hoping to create a more diverse narrative.

According to TV Line, Casey Bloys, HBO Max Chief Content Officer, said the team is being “very, very, conscious about the understanding that New York has to reflect the way New York looks today.” He added that they intentionally hired a diverse staff because they did not want to tell a story with, “all white writers or an all white cast.”

Will the original cast members return?

Unfortunately, Kim Catrall will not return as her iconic character, the sex-positive superstar publicist Samantha Jones. The character has been written out of the script, hopefully in a realistic manner. In his interview with TV Line, Bloys said, “Just as in real life, people come into your life, people leave. Friendships fade, and new friendships start....the friends that you have when you’re 30, you may not have when you’re 50.”

Audiences can expect Ramire’z character, Che Diaz, to fill out the trio. According to Deadline, Diaz is a queer stand up comedian who features Carrie Bradshaw on her sex and relationships podcast. The character will be “a big presence with a big heart whose outrageous sense of humor and progressive, human, overview of gender roles has made them and their podcast very popular.”

This role comes as a breath of fresh air amid many, fair, critiques of the series’ past. The original iteration of Sex and the City neglected to showcase the diversity of New York City, and oftentimes berated the LGBTQ community. SJP herself has noted that the show “didn’t age well” and appears “tone deaf.” While one new character can’t right six seasons of wrongs, we’re hopeful that this reboot will be the tonal shift the series needs.

What will the series be about?

The series will reportedly follow Carrie, Charlotte, Miranda, and Che as they navigate life in their 50s. Full details about the plot are still unknown, but Parker revealed that COVID-19 will be included.

How many episodes the series be?

The reboot is expected to be a ten-episode limited series, with each episode running at 30 minutes.

When and where can you watch the Sex and the City reboot?

The show will premiere on HBO Max on December 9, 2021. In the meantime follow @andjustlikethat on Instagram for updates.