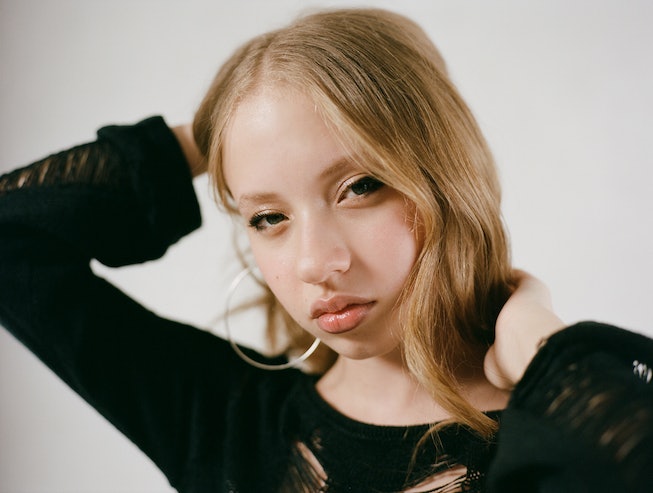 Simone Alysia’s drive back to New York City from a visit upstate was less than ideal. She spent the drive fighting with her ex-boyfriend in the backseat of a Lexus, passing a note back and forth until she was left frustrated and broken down. The experience not only left the singer-songwriter with a renewed sense of clarity, but it also provided her with many of the lyrics to her latest single, “Promises & Mistakes.” Now, with the arguments and lessons behind her, Simone Alysia’s video for the track, which premieres today on NYLON, is focused on taking back the power often lost in troubled relationships.

With its sultry production and hazy vocals that feel beamed in from a dream, “Promises & Mistakes” gets a visual to match from director Morgan Maher. “We decided to focus on what makes us girls feel sexy, comfortable, and fierce,” Simone Alysia says over email. The result is stripped down to the essentials — moody lighting, friends that double as sensual backup dancers, and Alysia’s firm resolve.

“It’s interesting to look back on my EP Love & Release, as It was a completely different era of my life. I was stuck in many ways from Covid to relationships, and this EP set me free in a sense,” says Simone Alysia. “To me, it’s kind of like a journal of 2020-2021 poured into five tracks. I’ve learned so much about myself both mentally and musically since the EP, and I’m excited to show the world who I’ve become.”

Watch “Promises & Mistakes” below, and read on to learn a bit more about Simone Alysia.

I’m in the backseat of a Lexus — the same seat where my song “Promises & Mistakes” was conceived — on my way back to NYC after being gone for three weeks in Colombia and Brazil. It’s a hot summer day, and I need a beverage.

What were you and director Morgan Maher hoping to convey with the video? What was the creative process behind the concept?

Morgan and I hoped to convey the feeling of taking back the power in a troubled relationship. After lots of conversations about ex-boyfriends and toxic relationships, we decided to focus on what makes us girls feel sexy, comfortable, and fierce.

How did you begin making music?

I began making music the second I could sing, I would make up songs and was always humming. I always knew that music was my calling. I started taking music more seriously in high school, when I went to the Professional Performing Arts School for classical vocal, and learned music production at Third Street Music School. I met a bunch of friends who shared my passion for music, and I started developing myself as an artist in various studios alongside them in NYC. I’m currently studying music at NYU at the Clive Davis Institute.

Which artists and genres/eras of music inspire you?

I’m inspired by a variety of artists, genres, and eras of music, and I’m still currently finding which genre best encapsulates my sound. For this reason, I’m really inspired by FKA Twigs and Pharrell Williams, as they both infuse many different styles to create their own distinct sound.

What kind of headspace were you in while writing “Promises & Mistakes?”

I wasn’t in a good headspace while writing “Promises & Mistakes.” In fact, many of the lyrics were written by myself and my ex in an argument in the form of a note we passed back and forth on our way back from upstate New York in the backseat of this same car. I was frustrated, broken down, and ready to move on from the vicious cycle we called love.

This track is off your EP Love & Release. What’s it like looking back on writing and recording the album? What have you learned since?

It’s interesting to look back on my EP Love & Release, as It was a completely different era of my life. To me, it’s kind of like a journal of 2020-2021 poured into five tracks. I’ve learned so much about myself both mentally and musically since the EP, and I’m excited to show the world who I’ve become.