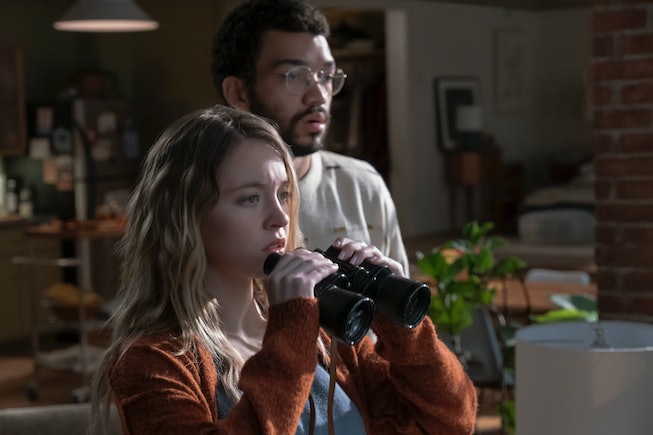 The film follows a young couple, Pippa, an eye doctor and Thomas, a sound engineer, who move into their first apartment together and start watching the couple who lives in the apartment in the building across from their window. They soon discover the husband is cheating on his wife and become obsessed with the couple — watching them when they have sex and even going as far as to put sound equipment in their home so they can hear them. Eventually, Thomas wants to stop, but Pippa, who’s spent years in medical school depriving herself of any pleasure, is in way deeper than she even knows. The Voyeurs is salacious, jaw-dropping, disturbing and very sexy — with a healthy dose of “what the f*ck” moments. While some of the film is wildly on the nose (Pippa is a voyeur eye doctor?!), it’s ultimately a chilling commentary on virality, how tantalizing it is to peer into the messy lives of other people, and how much we think we’re entitled to know about them.

NYLON spoke with Sweeney, who is based in Los Angeles and far away from the frigid Montreal where they shot the film, over the phone, ahead of its release.

The Voyeurs is now available for streaming on Amazon Prime.

What initially attracted you to this script and to this character?

There’s one moment where I was reading the script and I thought I got to the end and I was already jaw-on-the-floor shocked. I couldn't believe everything that was happening with Pippa and I look and there's 20 pages more and I’m like, “hat the hell could happen next?” A lot of scripts, you can kind of piece together what’s going to be the ending or kind of figure it out halfway through and I could not. I thought, “I have to do this. People are going to want to talk about it.” Hopefully they go on as much of a roller coaster as I did reading this. I was really intrigued by the entire script.

Why do you think your character is so enthralled in the idea of watching people? What is it about voyeurism that’s so tantalizing?

I think that Pippa and Thomas represent the two different sides of society where you can feel insecure and feel repressed and so you are wanting to peer in and become obsessed with someone else’s life. I think Pippa especially, she’s buried her head in books most of her life and spent years and years studying and trying to become one thing because that’s what everyone told her to do. Get a boyfriend, get a job, get a place to live; secure yourself. But then she lost out on all the fun of life and growing up and now she sees this couple that represents that fun, exciting, exotic life that she’s tried to tell herself that she doesn’t need and doesn’t want.

Tonally, this movie has some of the same thriller elements of White Lotus. What about that genre is attractive to you?

I definitely hope it’s a way it’s brought back. I was trying to think about this the other day; in the ‘90s and early 2000s there were a couple genres that became more popular, where you had these iconic rom coms that dominated the box offices, but also people became really obsessed with violence for whatever reason and you had all these detective shows and people got used to seeing insane violence onscreen. Now it’s funny because people are so surprised by sex and it’s like, so you’re more attuned to watching horrific acts be done to others instead of the purest language of love?

This hearkens back to movies like Rear Window or Disturbia. Did you watch those films in preparation? How does The Voyeurs take some of those ideas and bring them into the social media era?

What do you think this movie is saying about social media voyeurism?

I don’t want to put my own opinions into the audience's mind because I know that everyone who’s a part of this movie wants it to spark conversation and we don't want to have a biased opinion because we are so close to it and we do know how the story goes, so we’ll see what the audience says.

There are a lot of emotionally intense scenes in The Voyeurs. What was the challenging part of doing this film for you?

The most challenging part of the entire movie was running outside, because it was the dead of winter. I had probably 11 layers on; I had an entire layer of those heating pads and giant pockets and they built this entire outfit of them and I looked like the Pillsbury dough boy. I couldn’t even bend my arms, so that was the most difficult part.