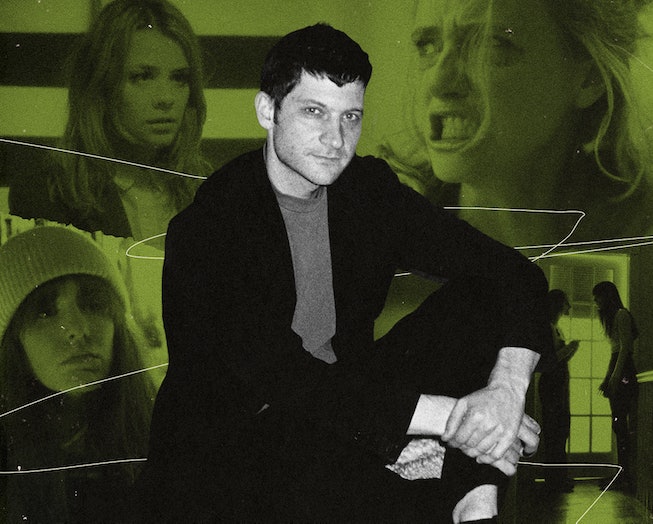 In a scene near the end of The Scary of Sixty-First, an unnamed blond woman sprint-stumbles down a residential Manhattan street. It’s obvious that something horrible has happened: She is bleeding from the nose, and her once-crisp white button-down is streaked with red. The camera moves erratically around her, swooping and swerving like some sort of malevolent spirit. Little white lights decorate the leafless trees lining the block. The accompanying score — textural, melodic, and disorientingly festive-sounding — generates a mood of overwhelming dread. There’s nothing quite like Christmas in New York.

“That particular cue is like this huge horrific hymn,” says Eli Keszler, the experimental musician who was tasked with composing The Scary of Sixty-First’s original soundtrack. The woman in the scene, only named in the credits as “The Girl,” is played by Succession actor and Red Scare host Dasha Nekrasova, who also co-wrote and directed the movie. The holiday setting is one of several overt references to Eyes Wide Shut, and Keszler’s enigmatic score is crucial to conjuring that Kubrickian, cursed-snowglobe quality. “I used a lot of Christmas music and sleigh bell sounds throughout,” Keszler explains, speaking over Zoom from his home in New York. “But I wanted to make them [sound] kind of monstrous.”

The Scary of Sixty-First, in select theaters Dec. 17 and available digitally Dec. 24, follows two friends — played by Betsey Brown and Nekrasova’s co-writer Madeline Quinn — who move into an uptown New York apartment that, initially unbeknownst to them, might once have been owned by Jeffrey Epstein. The sudden arrival of an amateur sleuth obsessed with the circumstances surrounding Epstein’s death (Nekrasova) sends the roommates down two very different dark paths. When their parallel journeys eventually intersect, the consequences are gruesome.

Shot on 16-millimeter film, Scary is littered with thematic and aesthetic allusions to a hodgepodge of genres and subgenres: political thrillers, gory slashers, mumblecore buddy comedies, domestic horror films of the 1970s. Knowing that music would play a key role in melding these touchstones into a cohesive experience, Nekrasova asked her friend Eli Keszler to write the score. “I feel pretty at home in the tone of the movie,” Keszler says. “Outside of film, I try to make music that is emotionally dynamic, that can oscillate between very disturbing and very humorous. I think that was the nature of this movie, too.”

The musical palette Keszler came up with for Scary is both poetic and propulsive, a vocabulary that pairs transcendental soundscapes with horror-oriented electronic textures. “I wanted a real acoustic feeling to the score,” he continues. “I wanted it to have a physicality, because there’s a lot of bodily horror and a lot of psychological horror. I use synthesizers to get momentum, but to me, the acoustic sound always carries more psychological weight.” Smaller idiosyncratic gestures — a broken-sounding chord here, an eerily familiar operatic melody there — work to simultaneously support and complicate the movie’s increasingly deranged narrative. “I don’t like when a score doubles what is happening on the screen,” Keszler says. “There’s just no point to it; it dulls everything. “You have to leave room for the viewer to feel paranoid. You can’t be like, ‘You’re gonna feel paranoid now.’”

While working on Scary, Keszler was interested in “creating really unusual textures that you really can’t fake or simulate,” a practice that will be familiar to anyone who has investigated the artist’s nonfilmic discography. This process manifests hypnotically during a scene where Quinn and Nekrasova’s characters guzzle water spiked with ADHD medication. The pair descend down a rabbit hole of Epstein-adjacent conspiracies, their mania soundtracked by brisk percussion and nocturnal-feeling synth chimes. “I created that cue with cut pieces of wood that I tuned to different pitches, and then I played this very frantic rhythm on that,” Keszler recalls. The result is immersive, with the girls’ panicky rummaging and druggy doubletalk integrated seamlessly into the mix. On the movie’s official soundtrack album, “Vyvanse Study” opens with a dialogue sample: “I’m not like normal people,” Nekrasova deadpans. “I’m obsessed with political struggle.”

Although he is drawing from patterns he uses in his personal song-making processes, Keszler — who previously contributed percussion to Oneohtrix Point Never’s score for the Safdie Brothers’ cult hit, Uncut Gems — understands that writing film music is a singular art. “I believe strongly that we’re trying to make something as a whole,” he says. “We’re trying to communicate one thing. I wanted the music to serve that goal.” As a viewer, it’s tricky to articulate what exactly that “one thing” is in the case of The Scary of Sixty-First. Is the aim to shock, to overwhelm, to unsettle? Is it a feature-length condemnation of too-online and conspiracy-consumed millennials? A bleakly satirical reminder that “truth” as a concept is ultimately irrelevant? Regardless of intention, Keszler’s compositions articulate the experiential ambiguity with style and sophistication.

His personal favorite music cue in the movie is probably “She Runs,” which plays during the aforementioned scene where Nekrasova’s character hurries down a wintry street covered in blood. “Every time I watch [that part], I feel a strong sense of satisfaction,” Keszler says. “It’s one of those magic things; if you make something and you can just watch and enjoy it, it’s like you've crossed over some kind of uncanny valley, and you know everything’s going to be OK.”