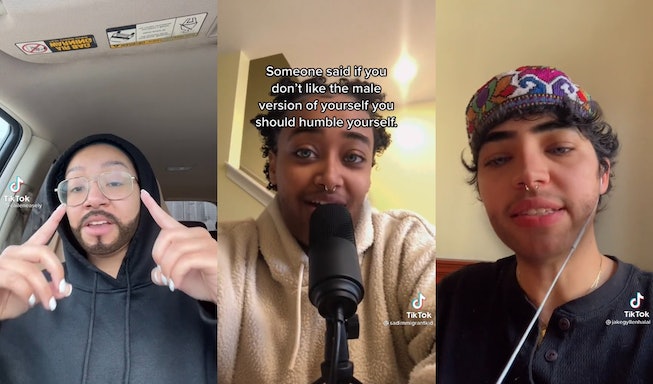 Podcasting — an art famously perfected by women and gay men — is unfortunately something that anyone equipped with a microphone and an opinion can decide to do. Men who love to refer to women as “females” as they strive to live an alpha lifestyle in line with the tenets of Men’s Rights activism can just as easily start a Patreon for their dozens of listeners as anyone else; it’s allegedly a free country. Which also means that TikTok creators are at equal liberty to clown them into oblivion, which just so happens to be the basis of the app’s funniest new meme.

The trend’s genesis traces back to the TikTok filter “Bearded Cutie” by AR designer Paige Piskin, which has all the makings of a little gender-bending fun: a faint beard, manicured eyebrows, male model blue eyes, and finally, the pièce de résistance of a septum piercing. The initial joke revolved around how if women creators using the filter didn’t like the way they looked, perhaps they should see it as a humbling moment. But that attitude quickly dissipated with creator Elsa Lakew’s take on the matter. “If I looked like this I would start a podcast,” she says, and boom! She’s in front of a microphone larping as an annoying podcaster with a seamless, “You know what women don’t be doing?”

The TikTok For You Page and its powerful, seemingly all-knowing algorithm can evoke psychic terror or side-splitting laughter within seconds of the other without warning, and this time it was the latter. Other creators began dueting the video and running with the concept on their own, each pulling out makeshift microphones and the most eye-roll-worthy view concerning what “females” don’t understand: how to accept their cheating and neglectful partners as they are, mothering their boyfriends, the audacity of wanting respect, their own bodies, etc.

TikTok’s strength is its ability to blow things up without consequence, which is harmless and fine when it comes to a little All-American clowning of annoying men with podcasts. “The evolutionary reason why women aren’t funny, and look, I’m a science guy, right?” mocks creator Hayley Hirsch in an excellent soliloquy of what a Redditor obsessed with the Bored Ape Yacht Club NFT would say. “I’m a data guy, I love Excel spreadsheets. Earth, air, wind, fire, crypto!”

Where there’s a beard filter, there’s now a woman making fun of a man with a podcast. Creator Caiden Easely, for example, created an entire bearded alter ego, Caiden “C Money” Weasley, whose sermons for “high-value men” include championing the use of booster seats for 4’11” men and calls to avoid “used up, stretched out low-value females.” It’s a movement! These “females” simply wouldn’t understand.

At some point, the targets of the meme will likely lash out with tired comebacks about how “females” aren’t funny, that these “females” are the problem in the first place, or something equally sad. To which I say — shouldn’t self-proclaimed Alphas be secure enough to take a joke? Until then, see some of the funniest takes on the TikTok meme, below.

NEXT UP
Culture
On The List (With Melissa Rich): How To Throw The Ultimate Apartment Party
Fashion
Meet The Depop Seller Making Belts Out of Tiny Bonne Maman Jars
Culture
Caroline Polachek In KNWLS & More Party Photos You Missed
Culture
Loewe’s Howl's Moving Castle Collection Is An Anime Dream
Style + Culture, delivered straight to your inbox.