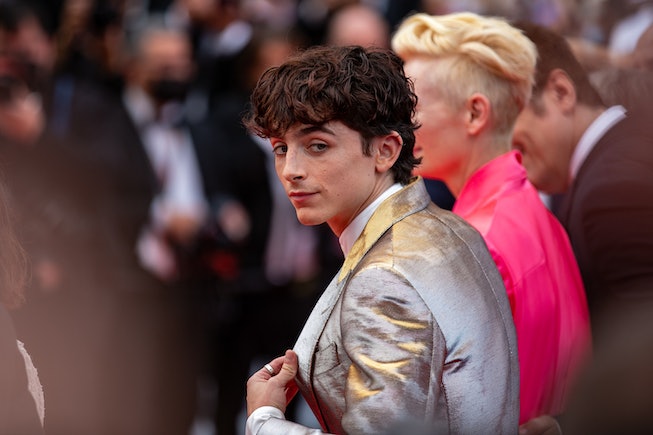 Good news for Timothée Chalamet stans: If the photos of him in his metallic Tom Ford suit and white boots at the Cannes Film Festival premiere of The French Dispatch Monday weren’t enough to tide you over for the much-anticipated film, there’s now an extended teaser of the scene where he’s taking a bath.

The film, which is told across three storylines, stars most of Anderson’s favorite actors, including Frances McDormand, Saoirse Ronan, Tilda Swinton, Willem Dafoe, Jason Schwartman, Kate Winset and Elisabeth Moss, was delayed several times due to the pandemic. It will be released in October 2021, and premiered at Cannes on Monday to a reportedly nine-minute standing ovation, at least two of which might be because of the bath scene.

In the film, Chalamet plays a mustachioed revolutionary named Zeffirelli and McDormand plays a veteran journalist named Lucinda Krementz. Anderson explained to Vanity Fair where in the film the scene takes place: “Krementz is now at dinner at her friends and neighbors’ house, and they happen to be the parents of one of the student leaders, which is Zeffirelli,” Anderson said. “The end of the dinner is interrupted by a riot in the street where tear gas gets into the apartment, so she has gone into the bathroom to rinse her eyes and is unaware — unknown to the parents, and all of them — that Zeffirelli has actually snuck back home and is taking a bath.”

In the scene, Chalamet is smoking and writing a manifesto in the bath while talking to McDormand as she washes tear gas from her eyes. He asks her to proofread his work and then gets out of the bath — fully nude — and hands her his notebook. Anderson clearly knows how to market a movie.