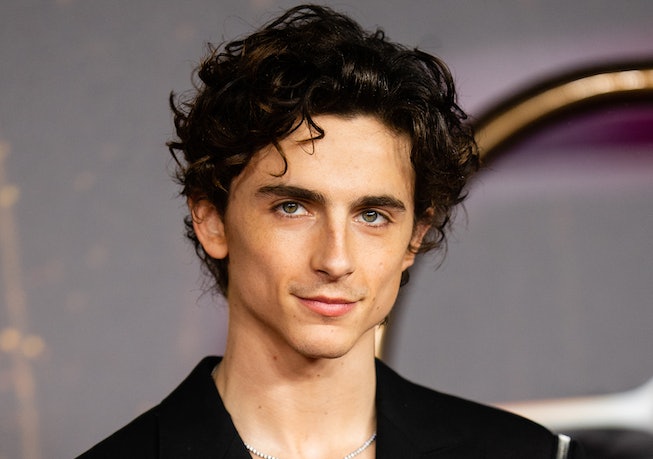 Timothée Chalamet, who will soon be playing Willy Wonka in an adaptation we don’t need, might be more self-aware than we ever realized.

The actor told Time that he felt he was “desecrating history” while recording songs for the film at Abbey Road Studios. Unlike the other two adaptions — including the famously awful 2005 Johnny Depp remake, Charlie and the Chocolate Factory — this Willy Wonka movie is a prequel, focusing on Wonka’s origin story before he started his murderous chocolate factory. However, like the original, Wonka is a musical fantasy and will feature several original songs by Chalamet, Olivia Colman, Matt Lucas and Rowan Atkinson. It’s being directed by Paul King, who directed Paddington and Paddington 2, both of which have an inexplicable cult following.

“I felt out of my league,” Chalamet told the magazine. “Like I was desecrating history!” We have every reason to believe Timmy is a fine singer, but is the music really that bad?

He continued to talk about the role, saying, “It’s not mining the darker emotions in life. It’s a celebration of being off-center and of being OK with the weirder parts of you that don’t quite fit in.” We love a patron saint of weirdos, and if the leaked video and consequent promo photos tell us anything, it’s that this Wonka is going to make a lot of velvet coat, ascot, top hat-wearing people who refer to themselves as “lads” feel seen.

There’s also already discourse about how Timmy’s Wonka is a twink, as coined by the Twitter user who leaked a video of him rehearsing on set, where you can hear him singing in all his theater kid glory: “Now it’s time to show the world my recipe. I’ve got 12 silver sovereigns in my pocket / And a hat full of dreams.” Never forget his musical origins: as a proud Barb in Nicki Minaj’s army!

Even Saturday Night Live spoofed the twink Willy Wonka classification, with Bowen Yang appearing as a gay Oompa Loompa on “Weekend Update,” where he’s accidentally outed by Colin Jost, who introduces him as a “Proud Gay Oompa Loompa,” when he’s actually there to talk about an Oompa Loompa labor strike. “We’re up all night rehearsing the little song and dance we do when a child dies,” he says.

Wonka is set to for a March 2023 theatrical release, but in the meantime, you can watch Bowen as a labor-organizing, freshly outed Oompa Loompa, below.