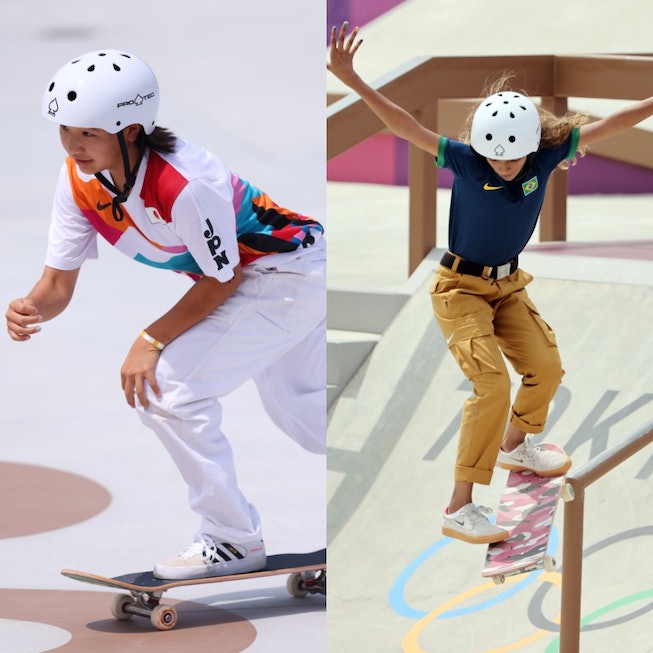 As the famed early-2000s poet laureate Avril Lavigne once said: “He was a skater boi / She said see you later boi / He wasn’t good enough for her.” Now, nearly 20 years after the pop-punk single dropped, skateboarding is not only good enough to be an Olympic sport, but also one that is being dominated by 13-year-old girls.

Japan’s Momiji Nishiya, 13, shredded her heart out at the Tokyo skatepark and took home the first women’s street skateboarding Olympic gold medal at the Tokyo Olympics on July 26. As if it wasn’t already a historic event, the girl next her on the Olympic podium, Brazil’s Rayssa Leal is also 13-years-old and now a silver medalist in the event. Japanese skater Funa Nakayama, 16, took bronze.

The event skewed young as hell, with half of the skaters in the finals lineup under 18-years-old. Although the Tokyo skatepark was empty (Olympic officials banned spectators due to an uptick in COVID cases in Japan) the skaters turned out their best tricks as hip-hop music scored their triumphs and wipeouts.

After winning gold, Nishiya encouraged young skaters worldwide to give the sport a chance. “Skateboarding is fun and interesting,” she told TIME. “I hope everyone can give it a try.”

Nishiya is Japan’s youngest ever gold medalist, as well as one of the youngest Olympians in the history of the games. The current youngest Olympian title is held by American diver Marjorie Gestring, who won gold at the 1936 Berlin Games at the age of 13 years and 267 days, making her 63 days Nishiya’s junior.

Nishiya’s win also follows 22-year-old Japanese skater Yuto Horigome’s earning gold in the men’s event, proving Japan as a skateboarding titan, and hopefully the beginning of a shift in how the country view’s the sport.

NEXT UP
Fashion
Jenna Ortega Is The Face Of Adidas’ Newest Line
Culture
On The List (With Melissa Rich): How To Throw The Ultimate Apartment Party
Culture
Marie Faustin Loves To Waste Men’s Time
Astrology
How to Use Astrology to Access Past Lives
Style + Culture, delivered straight to your inbox.