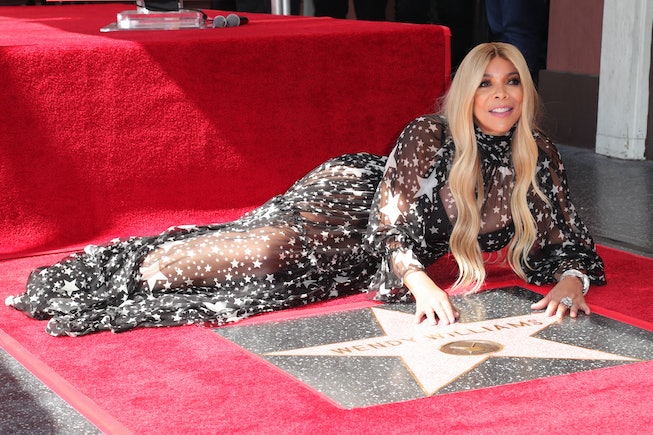 Rest assured, Wendy Williams is coming back. Just months after she was unceremoniously ousted from her show, Williams is already getting ready to launch her new podcast. The Wendy Experience has her upgraded from a purple armchair to a throne, according to two consecutive Instagram posts showing the same photo. Beaming at the camera with a microphone in front of her, wearing a fuschia lip with matching nails, Williams wrote “LOADING...#thewendyexperience #coming#soon #podcast #loading” in both captions.

Fans have been supportive in the comments, encouraging Williams to get paid. “Get better Wendy and come back and get your 💰,” one commenter wrote. “Whoever counted my girl out 🗣COULDN’T COUNT🌹🌹🌹🌹,” another said.

We don’t know much yet about the podcast, but the bio for the show’s Instagram accounts reads: “Jump on board for the new wave and everything Wendy Williams! The Wendy Experience will be unforgettable! STAY FABULOUS!”

In February, it was announced that The Wendy Williams Show would end in June, after Sherri Shepherd served as a guest host as Williams was grappling with health issues. In June, Williams told TMZ that she’s lost about 95% of the feeling in her swollen feet due to her battle with lymphedema, which she’s dealing with an addition to Grace’s disease. At one point, it sounded like execs were willing to bring Williams back to finish the show, but that didn’t happen.

A girl doesn’t ask for much! Now, Williams has her sights set on her podcast, along with a possible restaurant, and, of course, love.

“What I want to do is podcast, and I want to have a restaurant,” she told The Post, saying she envisions a seafood-centric parlor in New York City or New Jersey.

“If I don’t do anything else, including podcast, I would love to fall in love. I want to f*ck,” she said. “Excuse me, I’m gorgeous. Can I f*ck?” she quipped. The short answer is yes, because Williams deserves it all.

Despite her health issues, earlier this month, Williams assured fans that she was doing fine. She posted a photo to her Instagram story of her holding up her pixelated middle fingers with the caption “To Anyone who doubts the [queen emoji]!”