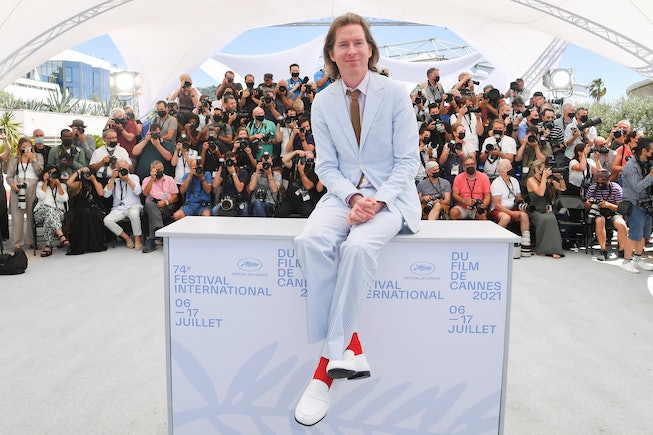 As if he couldn’t get any more twee, Wes Anderson can’t stop mining Roald Dahl stories for his movies.

Even before The French Dispatch hit theaters and Timothée Chalamet’s bath scene was sending fans into tailspins, Anderson’s newest film Asteroid City was announced. Now, there’s updates of his next next film in the works, which will be an adaptation of Dahl's 1977 collection of short stories The Wonderful Story of Henry Sugar and Six More for Netflix. This will be Anderson’s second time adapting a Dahl story, after directing Fantastic Mr. Fox in 2009. It’s unclear what the structure of the film is going to be, as the book contains seven short stories with equally vague names, like, "The Boy Who Talked with Animals,” "The Hitchhiker,” and "The Swan,” which could just as easily be Twilight Zone episodes.

But the twee little world of Dahl makes a lot of sense for source material for Anderson, who loves to elevate realities using saturation, bold color palettes, and outfits that are potentially sourced from Zooey Deschanel’s closet. We don’t know much about the film yet, but here’s what we know so far:

This is likely the first of many Dahl adaptations on Netflix

In September, Netflix acquired the rights to all of Dahl’s work for a hefty $502 million. And it looks like the streaming giant is in a hurry to cash in on its investment. Taika Waititi will be adapting Charlie and the Chocolate Factory as a pair of TV shows, which is separate from the Wonka origin story Chalamet is starring in, simply called Wonka. A Netflix version of Matilda the Musical is also coming.

Some big names have already been announced

Anderson, who famously works with the same half dozen actors, is expanding his Close Friends List for his newest film. Benedict Cumberbatch is reportedly playing the role of Henry Sugar, who uses magic to cheat at gambling (inspirational!). Dev Patel, Ben Kingsley and Ralph Fiennes are also among the cast, the outlets report. Fiennes is the only one who’s worked with Anderson in the past, in the 2014 film Grand Budapest Hotel.

It doesn’t look like Bill Murray is in it

At least not yet! Though don’t be surprised if he shows up, and the actor and Anderson have worked together 10 times over the last two decades. Murray is also starring in Anderson’s next film Asteroid City (which we also don’t know much about so far, except that it was shot in the town of Chinchón, Spain this past summer) and stars most of Anderson’s actor roster, including Margot Robbie, Tom Hanks, Scarlett Johansson, Jeffrey Wright, Rupert Friend, Adrien Brody, Tilda Swinton, Bryan Cranston, Hope Davis, Liev Schreiber, Jason Schwartzman, and Tony Revolori.