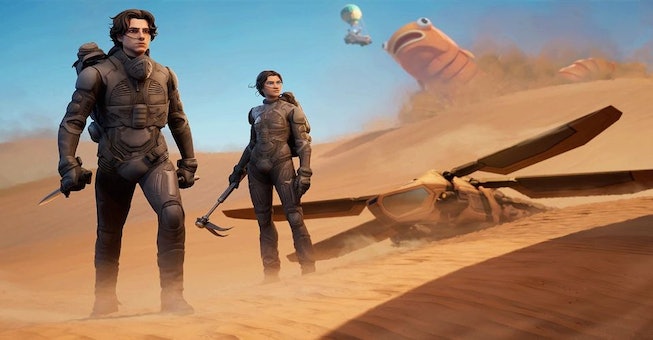 In a crossover that will surprise no one, Timothée Chalamet and Zendaya skins will soon be available in Fortnite, as part of a major Dune promo.

The crossover of the film adaption of Frank Herbert’s sprawling 1965 science fiction novel and Fortnite was leaked on Monday, by Fortnite content creator HYPEX. As Screenrant points out, Fortnite has been a go-to marketing tactic for major franchises in recent years, including Carnage and Venom, which both got their own skins for the premiere of Venom: Let There Be Carnage. Not to fall behind Marvel, DC Comics also got in on the Fortnite craze, with Justice League characters getting playable skins as of Chapter 2 Season 8. (For the non-gamer community reading this, Fortnite skins are essentially outfits for characters to wear.)

The hype of Dune mixed with the general rabid fanbases of both Chalamet and Zendaya will likely prove a lucrative endeavor. HYPEX revealed skins for Chani (Zendaya’s character), Paul Atreides (Chalamet’s character), Chani’s satchel, a “ornithopter” ship, the ability to “sand walk,” a “fremkit” for surviving in the harsh desert world of Arrakis and “twinblades,” the weapon of a Atreides warrior, as well as a loading screen. (Most of these are Dune references, and if there’s anything that could make me get on Fortnite, it’s the chance to pretend to be Zendaya for even a minute.) There’s not yet a release date for the bundles, but the account revealed what they will look like in the shop once they become available.

Later, Nate Hill and Mongraal, members of FaZe Clan, an e-sports and entertainment org, tried out the new characters early on a Twitch livestream, in a PR-sanctioned release — and Chalamet himself shared screenshots of his Dune character in Fortnite on his Instagram story.

The Dune hype has only gotten more intense since the film has been delayed for almost a year. And after the devastating first look of Chalamet as Willy Wonka for an upcoming remake, which made libidos shrivel up across the world, we’re down to milk his Dune look for all its worth.

This Dune remake marks the second time directors have tried to tackle this wild novel, and David Lynch’s 1984 version is generally considered to be unwatchable. Director Denis Villeneuve’s version premiered to an international audience last month, and will land on October 22 in the U.S. in theaters and on HBO Max. You probably don’t have enough time to read the book before the film premieres, but in the meantime, you can watch the trailer, below.

NEXT UP
Culture
Remember When Gossip Girl Made The Quintessential Thanksgiving Episode?
Culture
Jenna Ortega’s Childhood Hobbies Included Animal Autopsies
Culture
The White Lotus Will Return For A Third Season
Life
A24’s On The Dance Floor Is Its Most Fun Coffee Table Book Yet