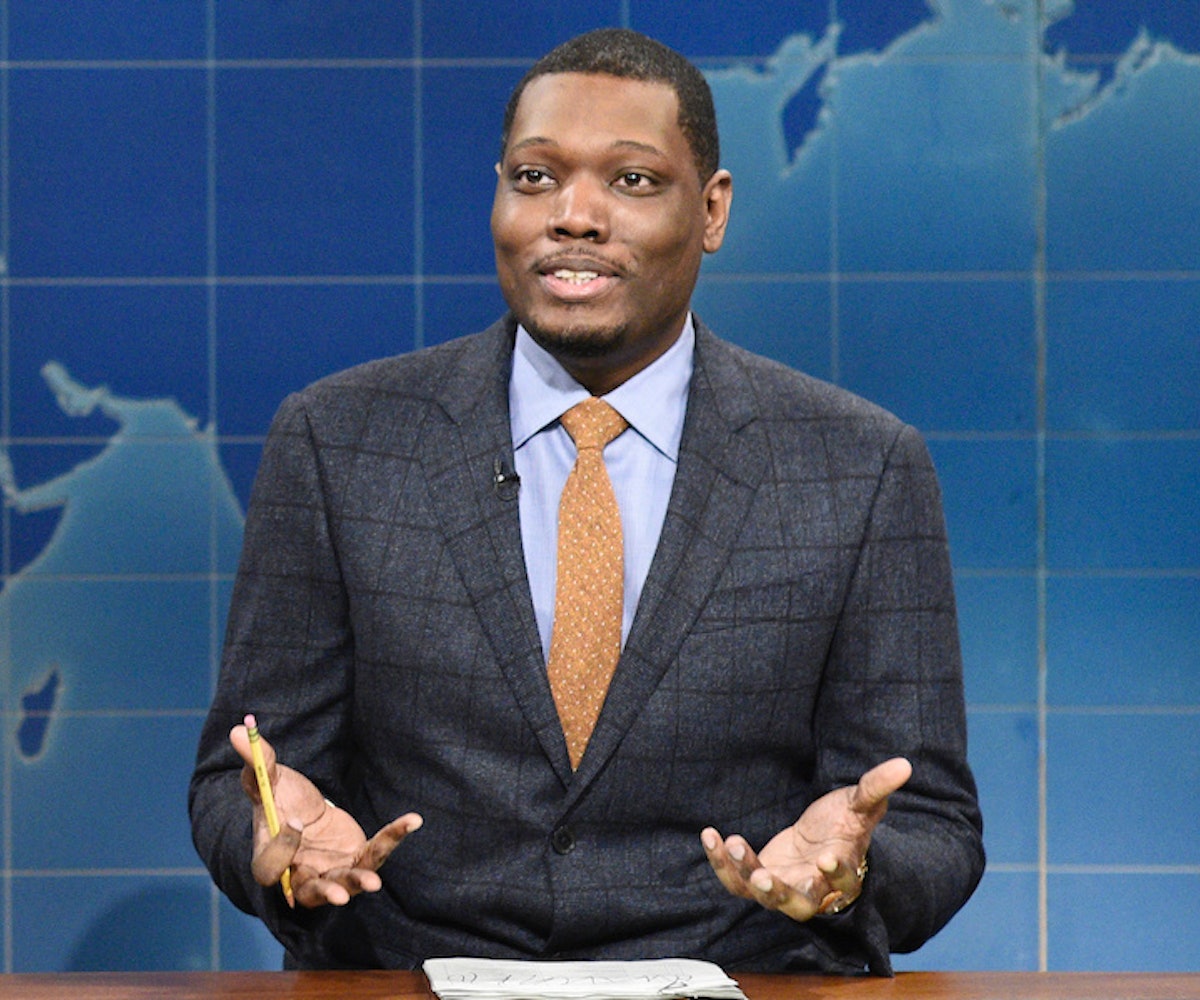 Photo by Will Heath/NBC/NBCU Photo Bank via Getty Images

Michael Che, one of Saturday Night Live'smost consistently problematic cast members, decided to deadname Caitlyn Jenner and refer to her as "fella" during his regular Weekend Update segmentthis past weekend, and now fans are calling him out on his repeated transphobia. What began as a joke about Kanye West's transformation over time in the public eye quickly became offensive and unfunny as Che needlessly brought up Jenner. Earlier this year, Che came under fire for intentionally misgendering a critic and posting flippant responses to his own Instagram Story; since SNL this past Saturday, he has similarly responded on Instagram.

"At first I thought Kanye was losing his mind, and now I feel like he's fine, he's just turning into an old white lady," Che began his bit, referring to West's plans to revisit his older lyrics to give them a G-rated makeover, per People. "I mean, he used to be one of the coolest black dudes on Earth. Now he's showing up to events in sweatpants and orthopedic sneakers, listening to Kenny G and trying to get black people to like Trump. It's like, how long before this guy changes his name to Kathy?" He continued on to bring Jenner into the mix, saying, "Now, you might think that I'm crazy, but about five years ago, there was a fella named Bruce Jenner, and he moved to Calabasas." The line was initially met with a few sighs of "no" from the audience, but they followed up with general laughter.

Now, SNL fans are calling out Che on Twitter for his transphobic attempt at a joke; many are commenting on his status as head writer when cast members have been fired for far lesser offenses.

Film critic Danielle Solzman wrote, "Please note that deadnaming and intentional misgendering is a form of transphobic violence," neither of which should be considered okay by SNL.

"Something so blatantly transphobic should have never been brought on the air," @jennagrips wrote. "Support trans women, do not treat them as your punchline. SNL and Michael Che need to do better."

This is not the first time Che has been openly flippant about his own transphobic attitude: This past April, when a writer critiqued Che's SNL co-star Colin Jost on Uproxx, Che repeatedly harassed the critic with vile, inaccurate depictions on his own Instagram stories. As a follower reached out to Che via direct messages to express their disappointment, Che intentionally misgendered the follower and trolled in his replies before posting screenshots of the entire conversation to his Instagram Story, rather than interacting with the criticism in any constructive way.

Watch Che deliver the transphobic bit in a clip from Saturday Night Live below.