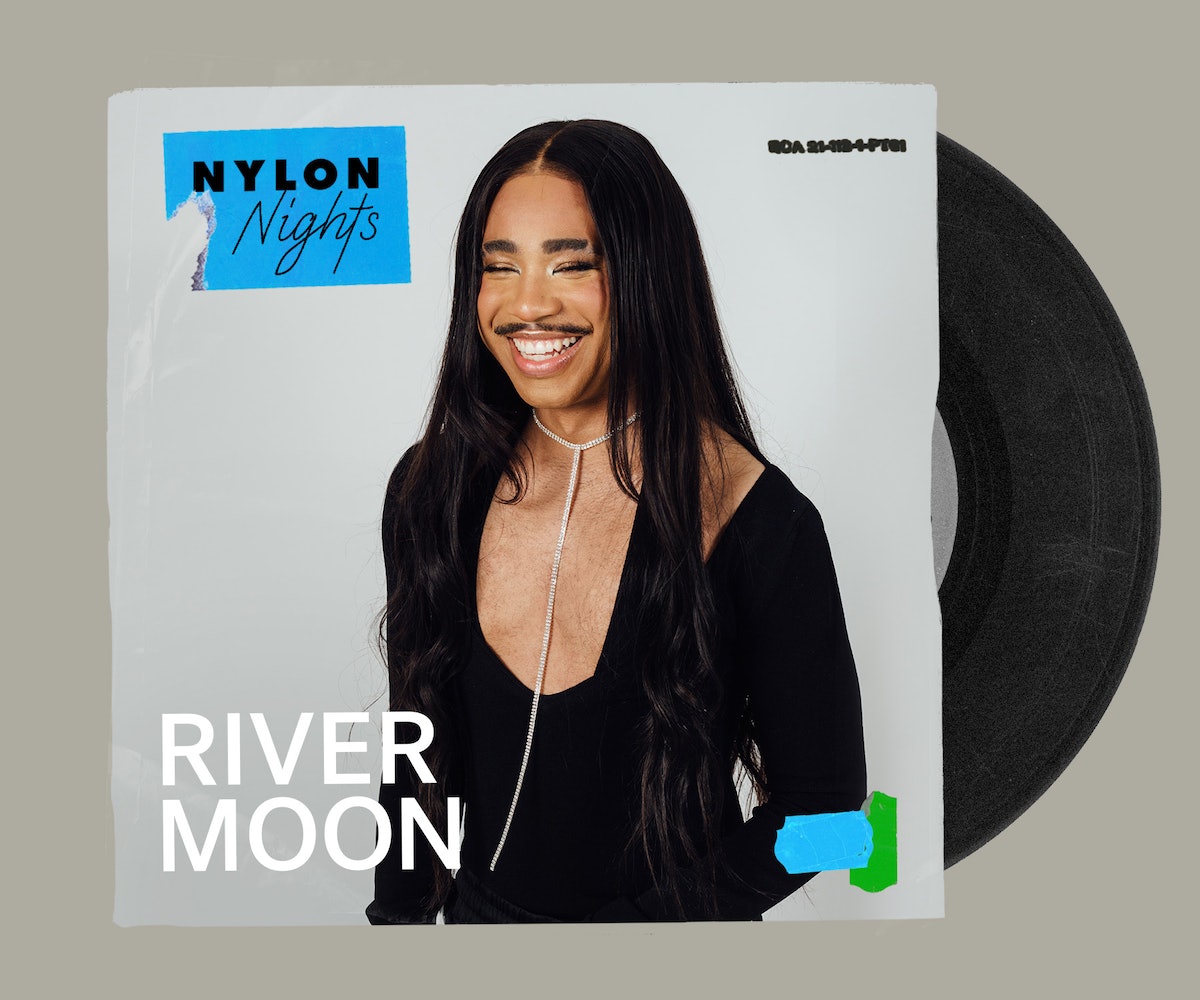 Going out? Need a playlist? Then NYLON’s NYLON Nights playlist is here for you. Each month we invite a guest DJ to curate an exclusive playlist that will keep you going from pre- to post-game. For June 2022, multidisciplinary artist River Moon takes over.

There are many different ways one might be familiar with musician and artist River Moon. You might know her as the trolling “chef emoji” moderator for the popular Instagram meme account Patiasfantasyworld, through which she’s garnered a reputation for posting some of the account’s most heinous and divisive memes (“I just post [memes] to stir the pot. I just want to start some shit,” she says). Or, you may recognize Moon through her brief pop star career and her streak of releasing trance-y BPM-raising, rave bangers. Or, you may have first encountered her as the DJ of a party, something she’s wont to do with her Fantasyworld friends in LA. But if you ask Moon herself, none of those labels quite accurately paint the full picture of what she really does. “Somebody [once] described me as the term ‘multidisciplinary artist’,” she says over a recent phone call. “I don’t know what the f*ck that means, but I like that.”

Regardless of the label, it’s clear that Moon is an expert at having — and curating — a good time. The artist, who splits time between the U.S. and South Africa, has brought her keen ear to fashion shows, opened for Azealia Banks, and got to work in the studio with Steve Lacy, all while solidifying herself as the girl to know if you want to have a good time. And that’s the exact attitude she brought to her NYLON Nights playlist, arriving just in time for the plentiful parties of Pride month, though she’s not calling this her Pride playlist.

Throwback hits from Cassie, Beyoncé, Britney Spears, and more are speckled throughout the playlist, slotted between current party anthems like Rosalía’s “SAOKO,” and Coi Leray and Nicki Minaj’s “Blick Blick.” She also throws equal nods to rising U.K. girl group FLO, and pop legend Whitney Houston, whom she calls her “bisexual icon.” It’s a high-energy, no-holds-barred run of songs for those truly going out out. We’re talking full-beat faces, thot dresses, and the girls who are already lit when they arrive to the club.

If you’re ready to get on that level, stream Moon’s playlist below and read on for the musician’s own candid commentary about each of her picks.

This is hands down my favorite Beyoncé song. I don’t agree with what she’s singing about because I’m never paying for a man, but if I’m in the worst mood and I do not feel like going out, put this on. I guarantee you I will be up and getting ready to hit the clubs.

Doesn’t this song just make you feel like you’re on the show Girlfriends? Like, you could be Joan, Toni, Maya, or Lynn? This song always reminds me of going out to the hot spot with your girls. At least one of you (me) might leave with some fine piece of trade.

Cassie randomly followed me on Instagram the other day. I never fangirl over anyone, but I’ve been listening to her first album since it came out. I was 7 then, I’m 23 now. It shaped me as the baddie that I am today. I love you, Cassie.

This is my favorite Britney song. It just makes me feel so fucking sexy inside. She put her pussy juices in this song. Shoutout to Puffy and Ryan Leslie. This song deserved a video and the works. Is it too late?

My best friend and I listen to this in the car all the time. This is my favorite song to come out this year. Is it too late to add Rihanna to the remix?

The Motomami herself. Rosalía is just the epitome of a bad bitch. This song is just such a good homage to one of my favorite Daddy Yankee songs. And that jazz break in the middle? She’s nuts for that.

I hopped out my feelings and I hopped in my bag. What else is there to say? This one is for the girls who choose to leave all their sorrows behind. Bitch, it’s time to get paid.

Easily one of Nicki’s best verses ever. This is proof that she is the best rapper alive. I don’t know another rapper who is this consistently good. There’s no debate.

This is the song of the summer. Bookmark me.

Kelis is mother. She is a Leo just like me. This groove by The Neptunes is one of my favorites. I always say that their work with Clipse and Kelis is their best work. I hope Kelis knows that she has an excellent lineage of sons and daughters.

This is a song by my dear friend Laina aka Mistervacation aka Realist!c. She’s a genius. This is for all my emo girls.

I am so excited for these girls. I missed girl groups who can actually sing and make good sing-along songs. I hope they go No. 1. This is like a Gen Z version of “Irreplaceable” by Beyoncé.

This is the pussy part of the playlist. I can’t do a Pride playlist and not include the queen of the lgbt and the greatest songwriter alive. bring back re-recording vocals and rearranging the whole song on remixes.

Azealia is the best. I will always love her and her music. She is the soundtrack to my life. The fact that she came out the gate freshly 20 and did this song? Don’t ever play my bitch!

I’m very happy this song is finally out. I recorded this in my bedroom at 2 a.m. during early pandemic and now it’s in all the clubs around the world. Shoutout to my sis LSDXOXO, one of the greatest of all time.

If you don’t know the runs in the last chorus by heart, we’re revoking your queer card.

Children were singing it at graduations, weddings, funerals. Whitney is my bisexual icon. I love her and in my head she is my aunty. Rest in peace to a legendary Leo.