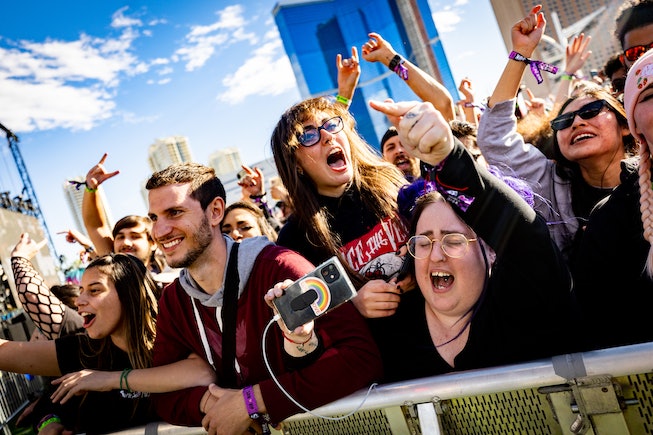 I expected to spend my Saturday night watching Hayley Williams celebrate Paramore’s triumphant return following a five-year hiatus, surrounded by thousands of like-minded fans. Instead, around 9 p.m., I found myself sipping a Modelo at a compact barbecue restaurant just off the Las Vegas strip. “This is the weirdest f*cking day ever,” a man in his late 30s marveled to a friend. Um, yeah.

At 10 a.m. that morning — exactly one hour before doors were set to open at the inaugural When We Were Young musical festival in Las Vegas, where many attendees were already queuing outside the festival grounds — the festival canceled its opening day. (Scheduled for three days — Oct. 22, 23, and 29 — the festival had the same lineup for each.) “The National Weather Service has now upgraded their Saturday forecast to a High Wind Warning, including dangerous 30-40 mph sustained winds with potential 60 mph gusts,” the announcement read. “Under advisement of the National Weather Service and the Las Vegas Metropolitan Police Department, we have no other choice than to cancel today’s When We Were Young Festival.” Since the Live Nation-backed festival was announced in January, some skeptics had jokingly referred to it as the Emo Fyre Festival on account of its too-good-to-be-true lineup — and for a moment, it was starting to feel like it.

By 12 p.m., the scene in the lobby of my hotel was something out of a dystopian film, costumed by Hot Topic. According to the lead singer of a headlining band, the artists themselves were only told about the cancellation mere minutes before the announcement, if at all. Hundreds of would-be festivalgoers, some of whom had flown all the way from Europe and South America, were now stranded; Saturday ticketholders were told they would receive refunds but for now were out of luck, in Vegas of all places. I watched as the dejected rolled their suitcases across the casino floor, while others, in the throes of denial, frantically tried to score secondhand tickets to Sunday’s show.

Behind-the-scenes, meanwhile, the bands got to work. “We immediately started texting back and forth about what we might be able to [do in order to] make it work and/or celebrate being in Vegas together,” Dashboard Confessional’s Chris Carrabba told me. By 2 p.m., the announcements of DIY shows started rolling in: Bring Me the Horizon and Landon Barker at Pearl Theater; Hawthorne Heights and The Red Jumpsuit Apparatus at The Strat Hotel; Anthony Green, Senses Fail, Thursday, and Bayside at the Sand Dollar; even Katy Perry got in on the camaraderie, giving a special shoutout to all the “emo kids” who ended up at her PLAY residency that evening (and reminding them that, once upon a time, she played at the original emo fest: Warped Tour).

That’s how I ended up at SoulBelly, a 400-person-capacity restaurant in the Arts District, where The All-American Rejects threw a last-minute free show that had people lining up since mid-afternoon. There, orphaned ticketholders were able to let out all the rage of the past few hours as the band raced through their classics. “Regardless of the radio of it all, the MTV of it all, you guys listened and you f*cking gave a sh*t,” lead singer Tyson Ritter said as the set concluded. “Every kid that is a little emo or a little weird or a little queer or a little f*cking lost, [who] listens to this music or listens to all this sh*t and felt seen — we’re those kids, too. That’s why we wrote this sh*t.” The crowd erupted in cheers. “The scene ain’t sh*t without you,” he concluded before launching into “The Last Song.”

Earlier in the day, I had asked Ritter if he thought Sunday’s show would go on. He was confident it would. “And it’s going to be great.” He was right. The emo/alternative scene cares too much to let a moment like this go to waste. “I never had a doubt,” Carrabba told me on Sunday. “Yesterday notwithstanding — and I hope that’s not the reputation they get — they’ve been running this very smoothly from the jump, and they are running it very well today.”

Held on the Las Vegas Festival Grounds, just beyond the Circus Circus hotel, the festival consisted of four main stages grouped in pairs; at any given point in the day, a band was playing on one of the two paired stages. At times, that led to some comical crossovers — the whiplash of Avril Lavigne’s jubilant “Sk8er Boi” going directly into Bright Eyes’ off-beat opener of 2000’s “An Attempt to Tip the Scales” is something I’ll likely never forget — but, for the most part, it was an efficient system that led to some of the day’s most memorable moments: Near the end of her band’s set, Paramore’s Williams turned to the stage My Chemical Romance would soon take and thanked them for always being welcoming peers; you could hear the band whooping in return from backstage.

The general vibe was neither sad nor angsty but straight-up gleeful. For fans, it was a chance to see the formative bands that defined their teen years. For the artists, it was a change to catch up with old friends they once toured the world with. “I’ll tell you how today’s going,” Carrabba told me in the press lounge, something of an emo high school reunion spot, just as the day was beginning. “I came in, saw the Mayday [Parade] guys. We had big hugs, spent a few minutes together. Then I saw Stephen from Anberlin, and we high-fived as we crossed by in golf carts…” He trailed off as Ritter approached our corner to give us both hugs and say hi. “See, it’s happening in real time.” Throughout the day, I’d see dozens of interactions like this, many of which crossed generations: The Maine stopping by to hug Meet Me at the Altar; Nessa Barrett posing with Royal & the Serpent; the sight of Huddy, in leopard-print skinny jeans, crossing paths with the Jimmy Eat World guys, dressed in tweed blazers.

Like the lineup itself, most attendees skewed heavily male and in their late 30s or early 40s. The first thing I heard upon walking through the festival’s checkerboard gates was Saosin’s Anthony Green announce: “I will be 40 in two weeks. 4-0.” The crowd may have looked intimidating, with silver spikes and all-black slogan tees as far as the eye could see (including one that amusingly read “I Am Pete Wentz,” a nod to Fall Out Boy — the most glaring omission of the all-star lineup), but the vibe on the grounds was just as welcoming and inclusive as inside the media tent. As far as I could tell, there was no shoving (save for the mosh pits, heavily encouraged by many bands), no line-cutting, no verbal altercations. Even Bring Me the Horizon, the hardcore UK screamo band, paused their set mid-song for a few minutes to help a potentially injured pit member. “So… is everyone excited for My Chemical Romance?” lead singer Oliver Sykes ad-libbed in his British lilt before launching back into guttural screams once they got they all-clear.

Earlier in the day, Williams posted an Instagram open letter about her experience as a woman in the scene for nearly 20 years. “To be a young girl in love with this scene was to have the hope that I might find my own way to belong. It took years to find that belonging. It’s taken a lot of unlearning. A lot of untangling knots I didn’t even know were there,” she wrote, adding: “Nearly 20 years later, we find ourselves a pillar of the very scene that threatened to reject us. And me.” Williams’ impact on the scene was echoed by her younger contemporaries throughout the day. “That was like the only influence we had,” said Meet Me at the Altar’s Ada Juarez. Bela Salazar of The Linda Lindas told me, “I grew up listening to Paramore, you know? I was in kindergarten listening to freaking Paramore. They’re awesome.”

At 9:40 p.m., Williams appeared with little fanfare, simply walking on stage with the rest of her band and launching into the powerhouse ballad “All I Wanted” — the first live performance of the song in the band’s history — before running through their greatest hits. About 30 minutes into the set, Williams perched at the edge of the stage — “You know I’m about to get mouthy if I sit down” — to expand upon what she had written earlier. The crowd gathered was the most wide-ranging I’d seen all day, and Williams’ comments captured that sense of togetherness better than anybody that day.

“Emo started in the mid-’80s by someone who had a vision, and it was started by some dudes that thought that punk-rock should make more space for alternative people inside alternative music,” she said. “But we got lost along the way, and in the mid-2000s when Paramore came onto the scene, the scene was not necessarily a safe place to be if you were different — if you were a young woman, if you were a person of color, if you were queer. And that’s really f*cked up if you think about it. Because this was supposed to be the safe place.”

She continued: “We’ve been around for nearly 20 years, and I’ve had my fill of older people, mostly older men, tell me what punk rock is and what punk rock isn’t. Just today there was some crusty old f*ck on the Internet saying punk was supposed to be anti-establishment. Well, it is. I can think of nothing more anti-establishment than young women, than people of color, and the queer community. So what I want to say to you is that there is space for you here now. And we love you and we love being a part of this scene.”

NEXT UP
Nylon Nights
How Emo Nite Brought Pop-Punk To the Las Vegas Strip
Culture
Aly & AJ's "With Love From" Video Is A Postcard Of Melancholy
Culture
Mowalola Teams Up With Bratz For A Daring, High Fashion Collection
Fashion
Coach Reissues Y2K Favorite Demi Bag