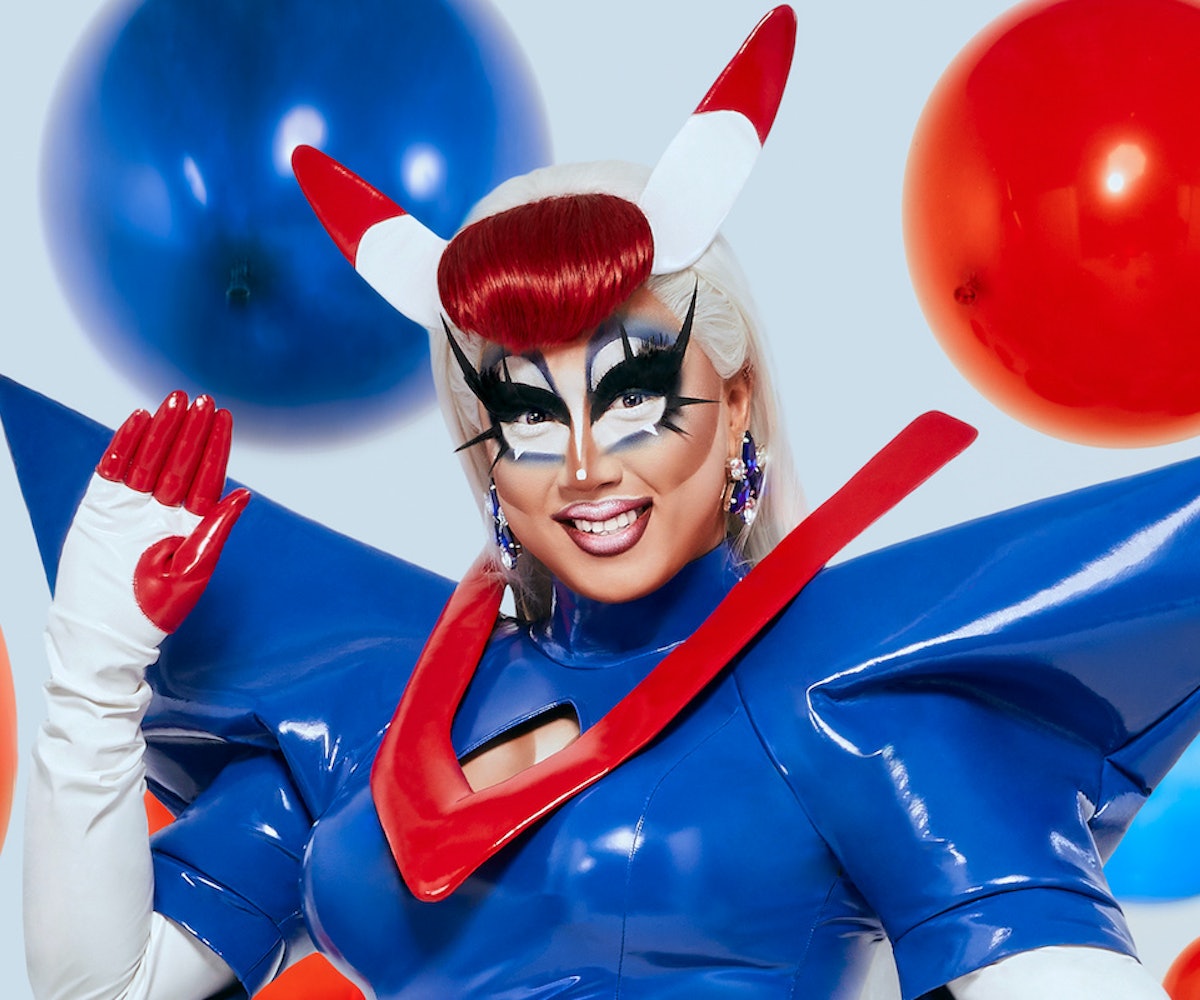 Every week, NYLON writer Michael Cuby will conduct an exit interview with the queen eliminated from RuPaul's Drag Race Season 12. This week, New York queen Rock M. Sakura was asked to sashay away.

In a sea of pageant queens and campy comedians, Rock M. Sakura easily stood out amongst her fellow contestants on RuPaul's Drag Race season 12. A San Francisco native who finds inspiration in all things anime and manga, the 28-year-old favored a bright, loud aesthetic that shined through her ensembles (like the Comme des Garçons-inspired dress she sported in her first episode) and through her vibrant makeup. With a warm heart and a comforting, positive spirit, she quickly became one of the season's most beloved queens. When she shared the heartbreaking story behind her exaggerated aesthetic — recalling how people used to assume her makeup was easy to do simply because she was Asian, prompting her to paint bigger and bolder in an effort to disprove them — it was hard not to root for her.

Unfortunately for Rock, that aesthetic didn't translate well for the judges, who frequently suggested that she edit down and do less. During last week's The Ball Ball, these critiques remained the same: they liked the tetherball wig she sported for her Lady Baller look, but criticized her for not putting enough thought into everything else; they appreciated the glamorous idea behind her Basketball Wife Realness but thought her padding was wonky; and when it came to her Balls to the Walls Eleganza, the one look that had to be designed from scratch, they praised her ability to construct such a complex garment, but complained that, once again, it was a bit all-over-the-place. When all was said and done, the naturally self-deprecating queen landed in the bottom two, where she was forced to lip-sync Rihanna's "S&M" against New York fixture Brita. Sadly, after spending a large chunk of the song struggling to rip the bottom off of her very restricting gown, Rock lost her edge and, ultimately, was sent packing, struggling to hold back her tears as she was dismissed.

Ahead of last week's episode of RuPaul's Drag Race, NYLON hopped on the phone with Rock M. Sakura to talk about her sad elimination, how she's grown more confident as an artist since filming, why Brita was the last queen she wanted to lip-sync against, and what it feels like to compete on a show that doesn't seem to value your particular drag aesthetic.

I want to start off by saying that I personally loved your final look for the ball.

I don't know if they'll air this part because of the crisis going on. I was inspired by a lot of abstract paintings and concept art from Final Fantasy for this look, but also Bjork's music video for "Virus." So I didn't predict coronavirus, but I like to think that I gave everyone a warning.

What do you think went wrong?

The main critique the judges gave me this whole season was that everything I had was too big and I needed to edit it down. Ross wasn't the only one that gave me that critique about my big tulle outfit. But my drag is big and explosive! I wouldn't really want to change my outfit too much besides the bottom part and maybe just keep the makeup cohesive. But I liked how big and loud my outfit was. Ru literally said "dripping with balls" and I was like, okay, I know what dripping with balls looks like and this is what it looks like. Personally, I feel like I did the assignment.

Drag Race has such a specific definition of what drag is and your big, animated style isn't what's typically valued. How does it feel to compete on a show where the very fabric of your drag aesthetic is already at odds with what the judges want to see on stage?

For me, it was so confusing. I auditioned for the show, they said yes, and they asked me to come on, but they kept telling me that [my style] was too big? I couldn't stop feeling confused and hurt — like, why did you ask me to come here to compete if everything I brought is what you don't want? I've had time to think about it now, but the show really asks you to be more than yourself — to be open to different venues of drag, to think of yourself differently as an artist, and to be able to morph and just play with all the crayons in the crayon box.

It does make me sad that, for a lot of the show, I feel I was really misunderstood. I wish that I just had the chance to understand why they wanted me to change so much. I never really got to have a big heart-to-heart with any of the judges. I'm still confused now, honestly. I want to be humble, but I hope people can see why I was so hurt and confused about my elimination.

Was that because you and Brita had become close during filming?

No. I knew Brita beforehand. I met her at Dragfest. She's an amazing lip syncer and she really works the house down. But also, I was reading Reddit threads before the season and the consensus was that everyone was rooting for Brita. I knew that everyone knew her name and everyone wanted her to win, so I was intimidated. I was just a girl from San Francisco with no name, bad drag, and only half her makeup because she forgot it at home because her tulle outfit was too big. I literally didn't have half my makeup because that outfit was so big.

When I left and got home, I couldn't look at my drag.

During Untucked, you said you wish you could be as confident in your skills as Gigi Goode is in hers. Has that attitude changed in the months since filming the show?

When I left and got home, I couldn't look at my drag. I live in a sardine can and I literally slept next to my drag but could not look at it because every time I would, it would remind me of how much confidence I don't have in myself and it would hurt. It wasn't until the last few months that I've been able to really just feel my groove again. It's hard not to judge yourself based on a placement you get in a competition. I learned that the hard way. The months leading to Drag Race, I was very hard on myself. I wanted to work hard before the season, when we were announced, to just show people my artistic talent, my designing skills, and my fun personality. Because I wanted to combat what I thought I would come off as on the show.

If you follow me on social media, I try to get something out every day and I do it with the courage of someone who got eliminated second. I have nothing to lose. My image doesn't matter to me as much, but it's also helped me create a brand that I'm proud of and makes me confident.

Are there any challenges you're really upset you didn't get to participate in?

Oh, all of them! For sure. Every season, they do a singing challenge, and I love singing. I'm not bad at it. I just know it's fun and I like doing it. The makeover challenge, too. It's pretty easy to put Sakura face onto someone else and I love meeting people, so that would have been really fun. I'm going to green-screen myself into every single episode I'm not in, so stay tuned for that!

What would your Snatch Game character have been?

I had three options. I had Helen Kane, who was the influence for Betty Boop, Aubrey Plaza, and Marie Kondo. You'll still be able to see them because I'm going to make videos with them. I already have some scripts ready.

You're from San Francisco. Are there any queens that haven't been on the show that you'd like to see on it in the future?

Well, I know so many San Francisco girls. Militia Skunt is one — don't say it too fast or you'll get her name. She's amazing, just a champion of Black performers. She's the embodiment of real confidence in your drag. She's 5'5 but she can flip and do tricks, she can dance, she can sing, and she can lip sync the house down. If you ever come to San Francisco, she is the one to see. Also, her partner, Roxy-Kotten Candy. They're in a drag duo. Her partner is a big core of the San Francisco drag scene and she's a great visual storyteller.

There's been so much conversation about how many New York girls are.

If you could go back and do anything differently on the show, what would it be?