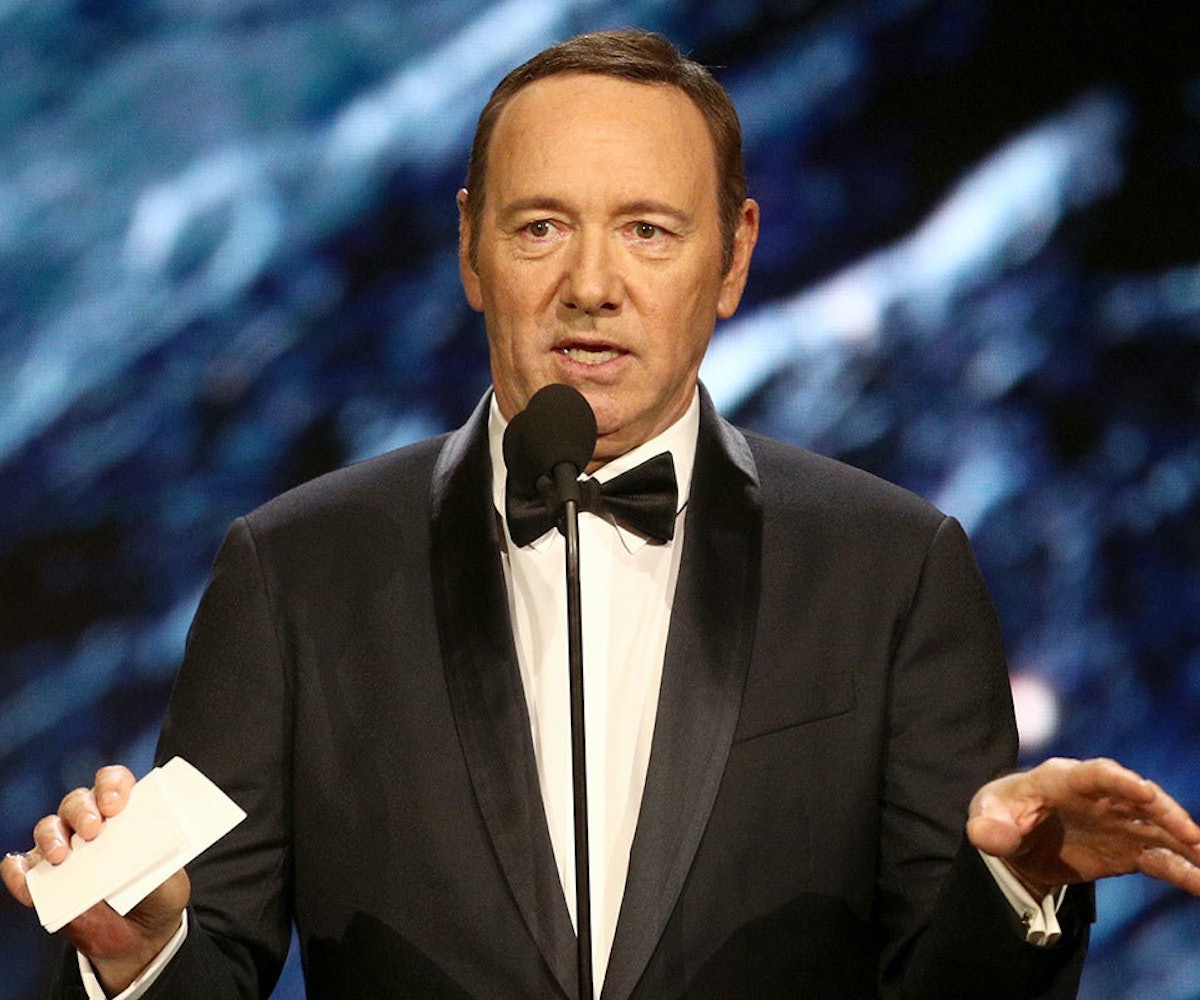 Kevin Spacey has come out of the closet as a gay man. For some, this is news. For others, this isn't news because Spacey's sexuality has long been one of those Old Hollywood Secrets™, not unlike the abuse allegations that have recently surfaced regarding Harvey Weinstein. People knew, but no one of considerable influence openly talked about it (that, or someone with more influence silenced them). It would be remiss to continue and not address the glaring difference between these two OHSs, though, that being one's sexual identity is not to be conflated with abuse of any kind—physical, emotional, or sexual—toward another. And that's exactly what Spacey has implied by coming out of the closet amid accusations that he, too, has expressed predatory behavior toward someone else.

Don't let Spacey's coming out fool you. He may be gay, but that does not excuse his alleged actions toward actor Anthony Rapp in 1986. Rapp was 14, performing in the Broadway edition of Precious Sons; Spacey was 26, on the brink of making it big. Rapp tells BuzzFeed he was cornered by Spacey in Spacey's apartment after a party thrown there had ended. "My impression when he came in the room was that he was drunk," Rapp says. He alleges Spacey picked him up and laid on top of him, on Spacey's bed. Rapp says, "I was aware that he was trying to get with me sexually," and he eventually "squirmed" away.

Rapp, now 46, says he feels compelled to share this story as more and more women speak openly about their disturbing experiences with Weinstein. Rapp should be applauded for his bravery. In an ideal world, Spacey, too, should be applauded for his coming out, but we're far from that because not only has Spacey come out after these accusations have come to light, he's done so in a damaging way that perpetuates the decades-old homophobic idea that being gay somehow equates to predatory behavior.

"I choose now to live as a gay man," Spacey says in his response to the situation. "I want to deal with this honestly and openly and that starts with examining my own behavior." Okay, one: A queer person does not choose to be queer. They choose to be out, but a queer person is queer even before they're born. Two: What behavior is Spacey planning to deal with "honestly and openly"? The behavior his sexual identity causes, or the predatory action he refers to as "inappropriate drunken behavior"? Laying on top of another human—let alone a minor—and making sexual advances without their consent is not "inappropriate drunken behavior," it's molestation. Let's not downplay the accusations against Spacey. And let's definitely not play into the idea his sexuality is part of the reason he allegedly made advances on a 14-year-old boy. It's not.

Both Spacey and Weinstein are predators; their sexual identities have nothing to do with this narrative. What Spacey has done is play into the idea that being gay somehow makes you a sexual predator, something that's not normal and needs, as his apology says, "examining." No, sir. Being gay is normal. Being a predator is not.