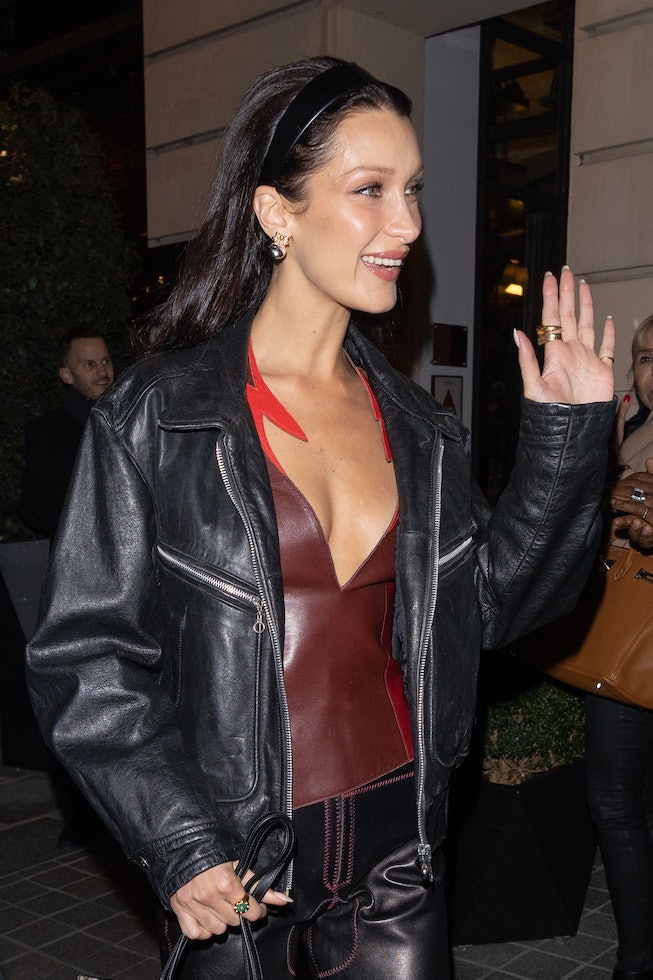 Over the course of the year, Bella Hadid has been ahead of the trend curve, experimenting with parting her hair to the side after a long period of center part dominance. From her signature sweeping up-dos to off-center face-framing pieces, her switchover from a middle part has been sporadic and subtle thus far. However, for her 26th birthday celebration on Sunday, October 9, a surprise dinner at Lucali in Brooklyn with friends (including sister Gigi Hadid), Bella showed off a full commitment to 2000s-era side bangs. Spotted in a lace dress, oversized jacket, and tinted glasses, the model wore her hair in a bouncy blowout with a full, heavy side fringe.

Bella chopped bangs in June this year and has since worn the long face-framing style in a number of different ways. She sometimes wears them to the front for a full, thick look and other times opts to grow them out and sweep them to the sides as tendrils. Her big birthday bang moment marks a combination of both, bringing Bella into a new era of sweeping, statement Tumblr-era side bangs.

Heavy side bangs had a significant moment in the 2000s with icons like Rihanna, Avril Lavigne, and Selena Gomez sporting them at the time. For the past few years, however, Gen Z had deemed the side part a “millennial” hairstyle (despite celebrities like Megan Thee Stallion making the controversial part look great all the time). Now Dua Lipa and Kim Kardashian have jumped back on the sweeping side bang train recently. Even Selena Gomez has returned to her signature Wizards of Waverly Place look, meaning the days are numbered for TikTok’s favorite hairstyle, the middle part.

Despite what Gen Z creators on TikTok said, side parts and side bangs were never “out” but the middle part definitely held the limelight for the past few years. With Bella Hadid’s new stamp of approval, that’s bound to change. Thankfully, if you’re looking to jump on the bandwagon, there’s so much inspiration to choose from—from the emo and scene kids of 2000s Tumblr to Y2K R&B icons like Aaliyah.