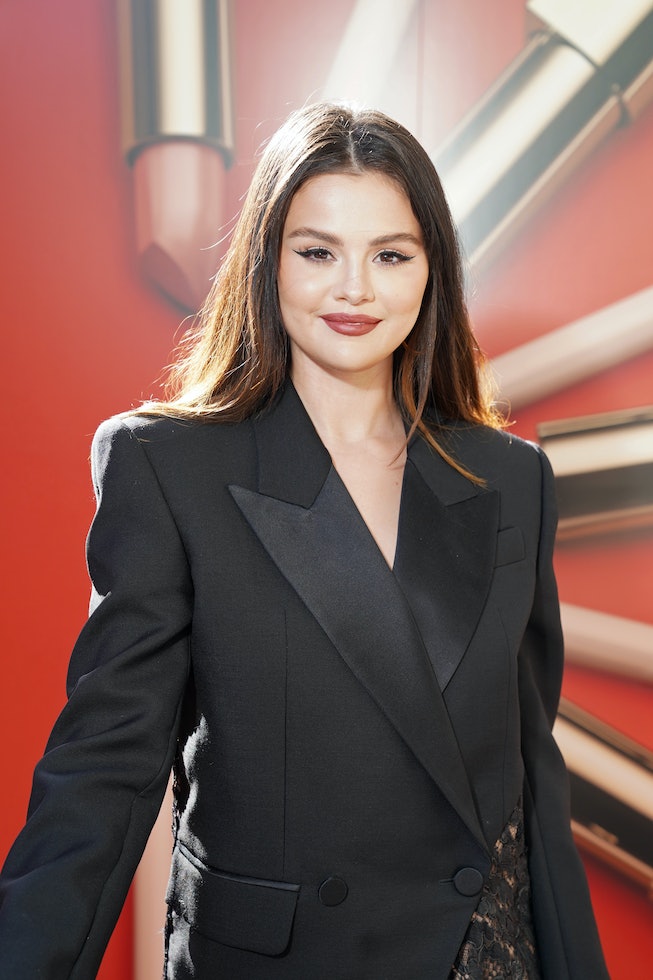 At the beginning of Selena Gomez’s career—when we first grew to love her as Alex Russo on Disney’s Wizards of Waverly Place—she constantly sported a very of-the-times 2000s side part. Selena often wore this haircut in a half-up half-down style with a strong side bangs and face-framing layers, influencing many teenagers to follow suit with similar hairstyles. While the Rare Beauty founder has now been through a number of hair changes since the 2000s, including a blunt bob and more recently long hair extensions, it looks like the star is returning to her original roots. Yesterday in London at the launch of her new Rare Beauty Kind Words lipsticks, the star was seen with side bangs and a half pulled back hairstyle reminiscent of her Disney Channels days.

Selena arrived at Space NK Kings Cross in a floaty long-sleeved yellow dress and strappy heels. Her hair, currently at a length just hitting her collarbone, was half pulled back into a brushed-up ponytail with volume at the back, with the rest of her hair worn straight with the ends slightly curled. From the side, you could see the extreme side part and height in her brushed-up ’do. But most notable was the look of her long side-swept bangs.

We can’t help but compare Selena’s latest style to her mid-2000s Wizards of Waverly Place role, meaning the aughts era beauty revival is is still in full swing, with side bangs perhaps returning to the spotlight. While side parts had previously been deemed “cheugy” by Gen Z on TikTok in recent years, Selena’s latest hair choice shows the path forward for a full-on revival, including for some other 2000s classic side-parted styles, like scene Tumblr fringe. Supermodel Bella Hadid has also been spotted recently wearing her bangs pushed to the side, so it’s clear a trend is stirring.

While you may not be ready yet to brush up the back of your hair for a voluminous half-updo and cut side-sweeping bangs, you may be excited about Rare Beauty’s new lipstick launch. Available in 10 made-to-match shades, the Kind Words Matte Lipstick is a buttery, pigment-rich, soft matte lipstick that keeps lips soft, nourished, and moisturized all day. The new launch is available now on the Rare Beauty website. Consider Selena equal parts hair and makeup inspiration.

NEXT UP
Beauty
No One Does #PamCore Beauty Better Than Pamela Anderson, Herself
Beauty
Storm Reid Tries Out A Y2K Girl Band-Favorite Hair Trend
Beauty
The Best Beauty Looks From The 2023 Grammy Awards
Beauty
Dua Lipa’s ’90s Updo Is Hair Inspo For Your Next Night Out
Style + Culture, delivered straight to your inbox.