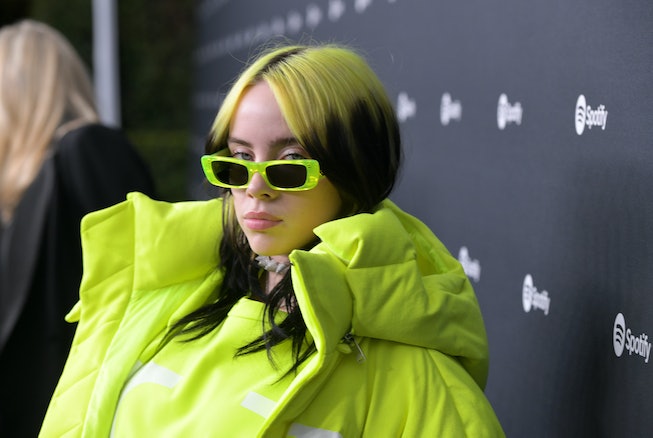 Take a look back through Billie Eilish's most memorable moments in beauty, and you'll notice that at one time, she was constantly changing up her hair color. Previously opting for shades of silver and blue, the singer has stuck with her most recent slime green coloring for quite some time. Fans might be eager for the artist to return to her once colorful hair ways, but she recently revealed there's a significant reasoning behind her continued color choice.

Responding to one fan's Instagram request for a new color, Eilish shared that she won't be swapping hues, at least for now. "It's called not being depressed anymore pls just be happy for me," she wrote back. She later replied again, writing, "This is the longest i've had the same hair color since I was 13 & and that's on mental stability and growth leave me alone."

Moving to her Instagram Story, Eilish jokingly threatened fans making fun of her hair, saying that if the teasing continued, she wouldn't release her new album.

Despite her current support for green, Eilish went on to reveal that a change is coming. Sharing that she'll soon have some announcements to make, she promised that after the February release of her Apple TV+ documentary, The World's A Little Blurry, she'll be embracing a new musical era — and a new hair color.

Until Eilish does decide to make a color change, she has one request of her fans: "Leave me alone with my hair that I've had for way too long."