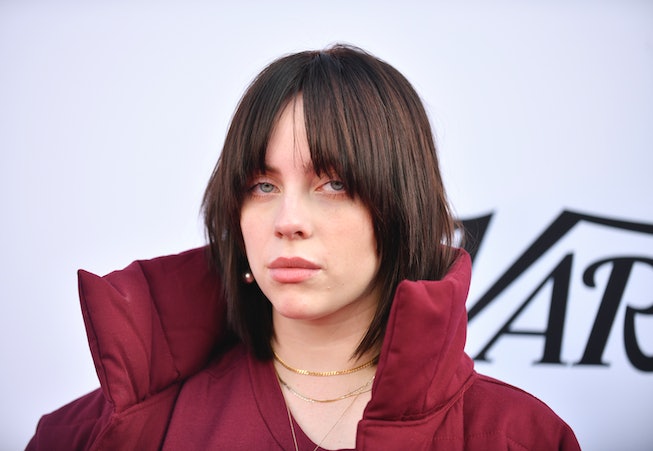 In case you missed it, Billie Eilish has been posting throwbacks of 2021 on her Instagram story in the past few days, asking fans to “name a date any date” for her to share a photo or video from that day. Getting a sneak peek into her personal camera roll, yesterday the singer revealed that she had red hair briefly between being blonde and going back to brunette last year.

After an Instagram user responded with the date, November 22, 2021, Billie posted a video showing a hairstylist blow-drying her then red hair. "Took the blonde out and went red for a week," she wrote as the caption. While she only had the color for a brief moment, she did go from one trending color to another, with all shades of red hair reigning supreme this winter. If she kept it she’d have also been in good company with the likes of Gigi Hadid, Bella Hadid, and Dua Lipa, and Barbie Ferreira all recently opting for a copper hair moment.

Billie is forever a fan of a dramatic hair reveal (who can forget when she broke the internet going platinum blonde last year). From cerulean blue hair to inky-black hair with electric lime green roots to her now deep espresso brown hair, at this point we’d seen her with almost every color but red. She’s also known for keeping her hair changes hush until the big reveal, sharing that while she was making the dramatic transition from black and neon green to platinum blonde (which takes multiple sessions with a professional colorist to avoid hair damage) she secretly wore a wig for weeks.

If Billie’s track record is anything to go by, she’s probably already plotting her next undercover hair change for 2022. We’ll also likely be none the wiser of the lengths she goes to keeping her salon visits under wraps while making the change, until perhaps this time next year. While we’re loving and getting used to the artist being brunette again (and really making her blue eyes shine), at this point we know that we shouldn’t get too used to Billie with any one hairstyle or color. From the look of the video in November, however, we’re hoping going back to red (for longer than a week) will be her next move.