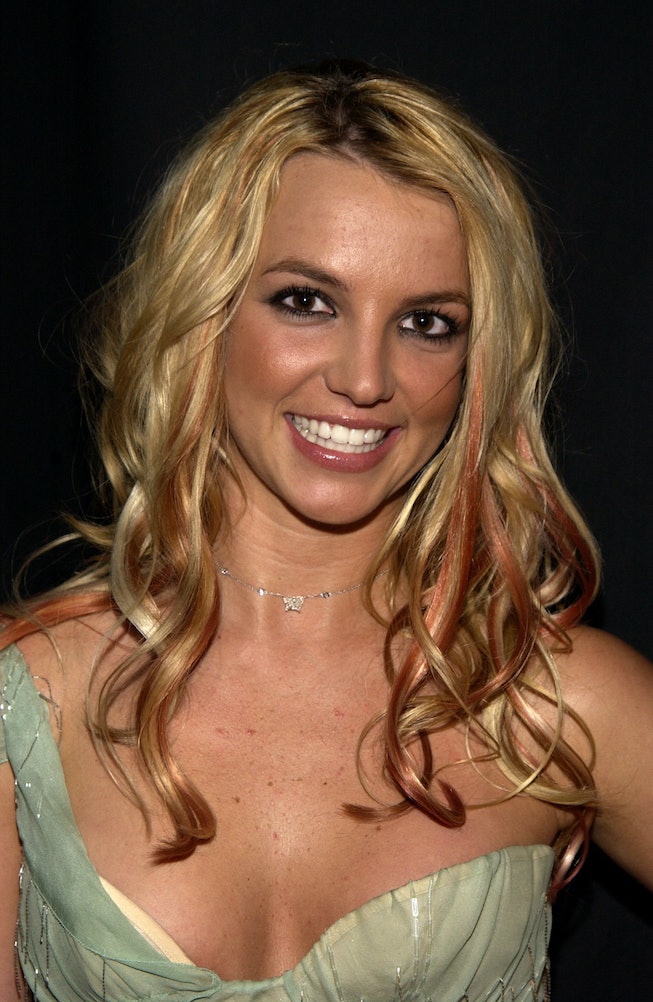 If there’s any celebrity that could personally upstage last night’s MTV VMAs with a single Instagram post, it’s queen Britney herself. The pop star announced her engagement to longtime boyfriend Sam Asghari in an Instagram video showing off her ring. She captioned it, “I can’t fucking believe it”.

Aside from the obvious excitement we have for Britney’s future wedding and the recently announced a fortuitous update in her legal battle to end her 13-year conservatorship, we also couldn't help but notice her new hair. The 29-year-old is rocking fire engine red streaks in the under layers of her signature blonde locks. The new hair color also perfectly matches her red french manicure, as seen in more ring photos, indicating the combination was probably planned for the announcement. We’re always here for a coordinated beauty moment.

Both two-toned hair and french manicures are trending at the moment as part of a larger Y2K throwback beauty revival so it’s only right that 2000s beauty icon Britney shows us how it’s done. However, this isn’t the first time the star has had this hair color. We’ve rounded up her previous rebellious red hair moments in honor of her electrifying engagement announcement.

At the NFL Kickoff Live in 2003, Britney sports bright red streaks in a short blonde bob with bangs, looking playful and quirky.

Who could forget her star turn as a motorcycle riding, laser dodging fiery red head in the 2004 Toxic music video.

Red streaks also made another guest appearance in her 2011 I Wanna Go music video where she humorously recreates a press conference confirming outlandish rumors about her life and telling off swarming reporters. Seems like a fitting moment to reference with her recent announcement.

In a nearly forgotten hair moment, Britney dyed her hair fully burgundy in 2014.

It seems like Britney is always subverting expectation when she goes red, so we’re excited for this new era. Her post confirms the two-toned hair trend is here to stay and red is no doubt the color of the moment for streaks. We’re loving seeing her take part in the revival of trends she heavily defined in the 2000s. Now all that’s left on the agenda is to #FreeBritney.