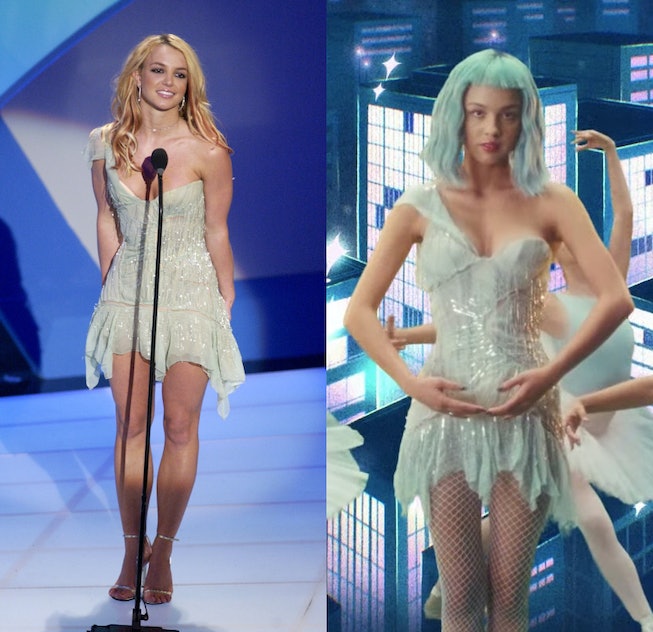 Is the Y2K pop revival officially here? On Aug. 23, everyone’s favorite pop star princess Olivia Rodrigo dropped her music video for “Brutal” and among her many outfit changes, one stood out in particular: In the first few seconds of the video game-inspired set, we see Rodrigo wearing a Roberto Cavalli dress, the same one that Britney Spears wore at the 2003 American Music Awards.

Spears first wore the one-shoulder mini dress, which originally made its runway debut during Milan Fashion Week in September 2002, on stage to present one of the 2003 AMAs, and paired the look with sparkly heels and diamond hoop earrings. Now, 18 years later, Rodrigo added her own pop-punk spin with fishnets and a teal wig.

Writer and fashion columnist Evan Ross Katz first made the comparison via Instagram. In the post, he wrote, “Olivia Rodrigo (2021) and Britney Spears (2003) both wearing Look 31, a corset dress draped in chiffon and bead fringe, from Roberto Cavalli’s SS03 collection.” In his Instagram story, he also said, “This took some digging but I knew this dress looked familiar.”

It’s no surprise that the singer pays tribute to Spears. Despite being born in 2003, Rodrigo has shown her admiration and support for the pop superstar. In her recent cover story for GQ, Rodrigo commented on Spears’ current conservatorship battle. “The Britney stuff was just horrific, and I’ve been following it very closely,” Rodrigo said. “I think it’s just so awful. I think, as an industry, people are getting better at not taking advantage of and manipulating and bullying young women.” Rodrigo was also seen earlier this year sporting Spears’ iconic “Dump Him” tee alongside friend and actress Iris Apatow.

Rodrigo’s “Brutal” music video was packed with plenty of early 2000s fashion trends that are just too good to let go. Styled by Chloe and Chenelle Delgadillo, as well as Ron Hartleben, Rodrigo and her crew of mall brats wore Delia’s-esque baby tees, newsboy caps, bedazzled tanks, ombre-tinted sunglasses, butterfly clips, and more. Check out the rest of their nostalgia-heavy looks in more detail, below.