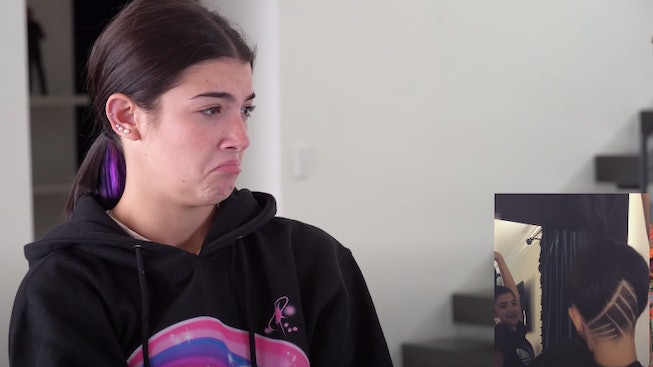 Before she was named the face of Morphe 2, and given her own nail polish collection, Charli D'Amelio was just a young girl eager to shave her head. Appearing in a new video with hairstylist, Brad Mondo, D'Amelio reflected on her many hair mishaps, including a crooked shave.

From a short bob style to a single blonde highlight that mystifies Mondo, D'Amelio breaks down some of her most memorable styles. While many of the styles aren't too unexpected, D'Amelio saves the best for last, revealing that she tried a shaved style on two separate occasions.

For one shave, D'Amelio had accompanied her dad on a trip to the barber shop. "I went in, and I was like, 'I would like to shave the back of my head, please. Just a small triangle'" she said. As she recalls, the stylist then decided to go further up the back of her head, and he even added designs. "It was really high, and crooked," D'Amelio said of the completed style.

She later shared a peek at another shave, which she had entrusted her mom with. For the style, a young D'Amelio had asked her mom to shave only the side of her head. "I wanted it," she said of the style. "No shade towards my mom." The resulting look was kind of adorable, and featured a shaved section opposite a deep side part.

As the video concludes, D'Amelio admits that it's unlikely she'll try shaving her head anytime again soon. She shared her preference for longer hair, explaining that she prefers to have enough hair to pull up into a messy bun. She's also decided on a signature style, saying that she prefers adding creative coloring on the underside of her hair.

See her complete history of hair, below.

NEXT UP
Beauty
Meet Matthew Newman, The Hairstylist Behind the Latest Viral TikTok Blowout Tutorial
Beauty
The 2022 Billboard Music Awards Brought Out The Best of Rockstar Beauty
Beauty
11 AAPI Beauty Pros and Creators You Should Follow Right Now
Beauty
Doja Cat Channels The ’90s With Her New Blunt Bangs