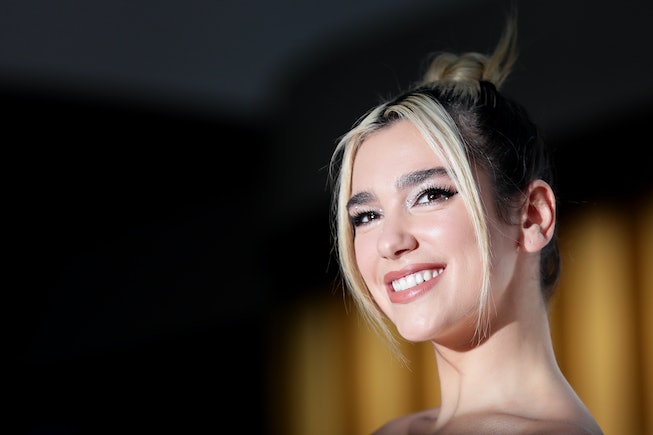 Dua Lipa's latest manicure is taking a cue from her music. Over the weekend, the singer revealed a colorful spin on ladybug nails. The work, completed by nail artist, Mei Kawajiri, also known as Nails By Mei, is a nod to the singer's recently released "Hallucinate" video, and features dots, stripes, and a touch of neon.

On Friday, July 24, Kawajiri shared an Instagram of the "Hallucinate Ladybug" nails she had painted for Dua Lipa. Featuring rounded tips, each nail featured a different, but complimentary style. Using polish in shades of black, white, light pink, green, and blue, Kawajiri gave each nail its own distinct personality.

Colors used in the look are prominently featured throughout Dua's animated "Hallucinate" video. Featuring a cartoon version of Dua Lipa, the video contains a number of adorable animals and rainbow-hued imagery.

The ladybug nails come as Instagram continues its admiration for mix and match nails. Like so many recent social media favorites, this look is all about the clashing. While others have chosen to complete the style by mixing colors or choosing a single accent nails, Dua's variation featured stripes in horizontal and vertical patterns, and artwork sectioned into separate spaces.

To create a similar insect-inspired look for your own nails that might be a bit easier to DIY, use a single base coat color, and then add in dots of a different color by using a toothpick or dotting tool.

Take a cue from Dua Lipa's ladybug nails, below.

NEXT UP
Beauty
11 Aquarius-Inspired Nail Art Ideas For the Unpredictable Season
Beauty
Dua Lipa’s ’90s Updo Is Hair Inspo For Your Next Night Out
Beauty
Isamaya Beauty’s New Lipstick Was Designed To “Celebrate The Male Form”
Beauty
Bella Hadid’s Clip-less Updo Is Going Viral On TikTok
Style + Culture, delivered straight to your inbox.