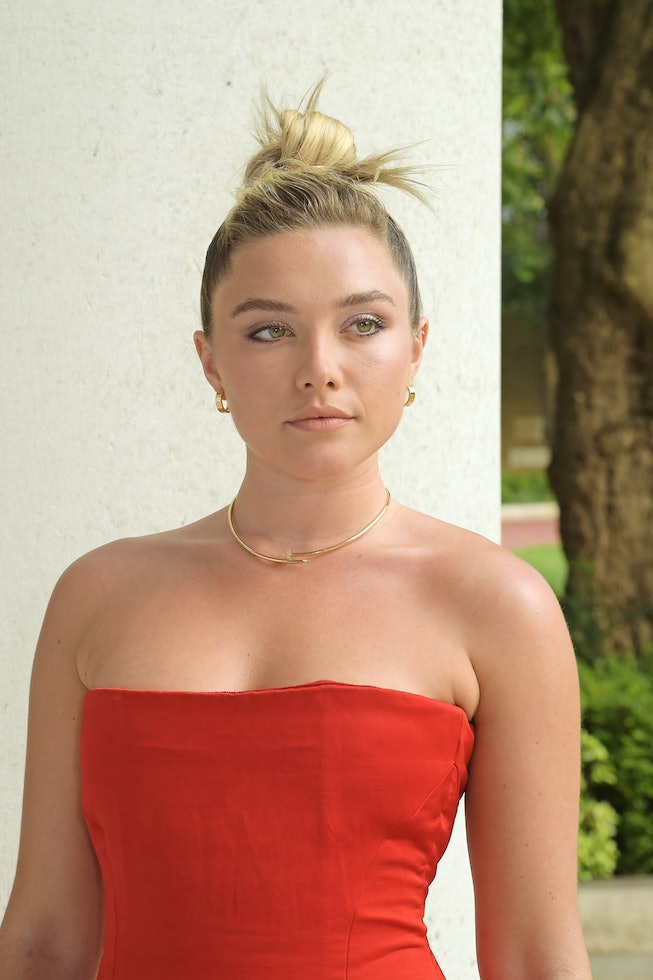 These days, actress Florence Pugh has become somewhat of a hair chameleon. It can be hard to keep up with whether she’s blonde or brunette, or had long hair or short hair. In fact, Pugh has undergone a number of hair changes recently. Last year, she dip-dyed the ends of her then blonde hair lilac, then she dyed her light locks brunette for her forthcoming movie, The Wonder. In November of 2021, the 25-year-old actress chopped her newly brown hair into a short pixie-mullet cut then let it grow shaggier for the Don’t Look Up Premier in December, before going back to bright blonde for the new year.

For the first month of 2022, Pugh has been rocking a short, choppy blonde pixie-mullet cut with dark roots and a side part (despite what Gen Z says about them). Now, it appears the star she’s gone back to brunette in an even darker shade. With a new, even shorter haircut that looks between a bixie and mixie, Pugh posted the reveal on Sunday to her Instagram story, dancing to music, and celebrating it being “Euphoria day” (relatable). "Euphoria day. Means smiley day," she wrote over the closeup selfie video revealing her third dramatic hair change in three months.

Within the series of videos, Pugh told fans her Instagram cooking segments would be returning soon. "I am aware you've all been patiently waiting for a 'Cooking With Flo,' and I will do one next week," she said, without addressing her new hair color—perhaps at this point she thinks we’re used to the changes. Regardless of the hair color back and forth, fans have still weighed in on the change and compared the new edgier cut and darker color to everyone from Posh Spice to Kris Jenner.

“If you had told me in 2019 that Florence Pugh would go from Hollywood blonde bombshell long hair to Kris Jenner in 2022 I would've said you were lying,” one person wrote on Twitter. “Florence Pugh bleached her hair blonde during the holidays only to go back to brunette now? Oh that poor hair I know it hates her rn,” Tweeted another. Like us, it seems Pugh’s fans are finding it hard to keep up with the multiple hair changes. Let’s hope for their sake (and the health of her hair) this switch to brunette lasts longer than the last one.