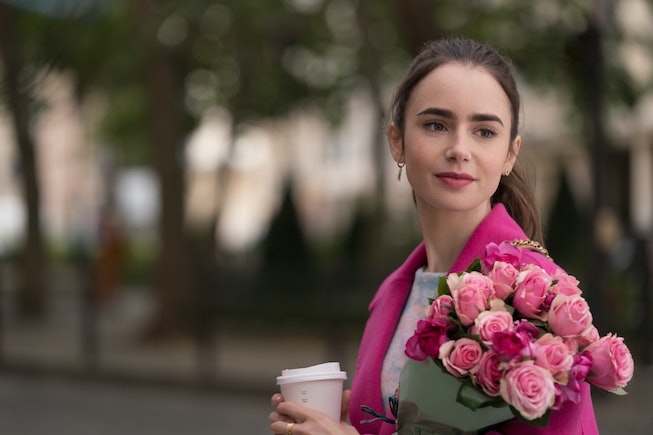 Only weeks after premiering on Netflix, and Emily In Paris has taken social media by storm. Although completely unrealistic, the popular series takes an endearing look at failing upwards, and as its brought Twitter users together to point out the show's every ridiculous moment, Emily In Paris has also resulted in a serious conversation about Lily Collins eyebrows.

Collins is already a style icon, but her role as the fictional Emily Cooper has solidified her status as a continued inspiration for beauty routines. If you've been eyeing the series, envious of Collins's perfectly arched brows, her makeup artist revealed the show's secret, sharing the complete Emily In Paris eyebrow routine with Town and County magazine.

Aurelie Payen, a makeup artist on Emily In Paris, acknowledged that Collins does have "prominent and unique" brows. However, recreating her look is super easy, and really only takes a few products. "Everyday I used eyebrow gel from Anastasia Beverly Hills, which helped me fix Lily’s brows all day long. Then I used a concealer from Laura Mercier lighter than her natural skin tone to highlight the shape," Payen told Town and Country.

If your brows are thin or you find them hard to manage, Payen instead suggested using tinted eyebrow gel. "The eyebrows play an important role in the harmony of the face. If they are well-plucked according to the shape of your eyes, they can enlarge your gaze," she said. "I would use a tinted brow gel for example, the legendary brows in Super Model Brow by Charlotte Tilbury, to recreate [Lily's look]. Using this gel, I redefine the eyebrow hair by hair for a more natural finish."

Of course, these products aren't the only options available for maintaining or defining your brows. Although tinted eyebrow gel remains a popular option for enhancing the brows, you can also use concealer, growth serum, and specially designed pencils to fill in and fluff this facial focal point.