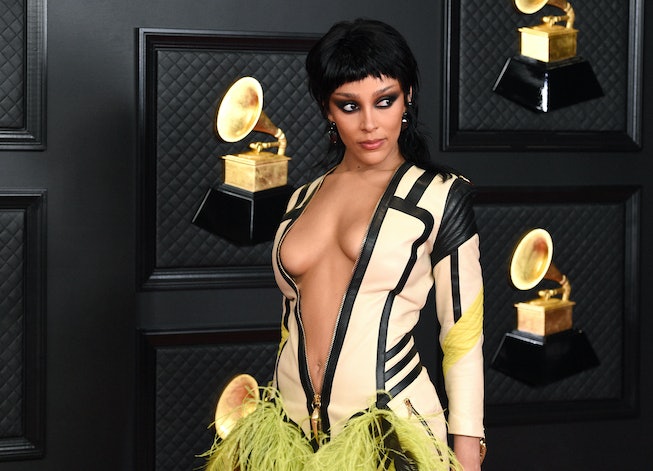 Judging by the latest runways and Doja Cat’s glam routine for the 2021 Grammys, this year is all about experimenting with your hair. Experts have already predicted that the year would be filled with celebratory hair moments, and if Doja Cat’s latest look is any indication, it’s officially time to embrace your wildest hair dreams.

Posing for photographs, she showed how her mullet was particularly noteworthy given its inclusion of baby bangs. The style, which features a set of bangs cut high above the eyebrows, was also just spotted at Louis Vuitton’s Fall/Winter 2021 presentation.

Remaining pieces of Doja Cat’s hair were styled in soft, loose waves, and the style extended to below her shoulders. A few longer, face-framing pieces extended off the bangs, creating a layer-like effect.

Never one to settle on a single look, Doja worked with Henderson on a second performance-worthy ponytail. The high ponytail, which peeked out of the top of a latex body suit, featured extensions and a bit of burgundy hair dye.

In creating the style, Henderson first started by spraying the hair with Joico JoiMist Firm Finishing Spray. Doja’s hair was then pulled into a ponytail, and prepped with Heat Hero to protect against thermal and mechanical damage.

Adding in extensions for volume and length, Henderson applied a dime size amount of the K-PAK Color Therapy Luster Lock Glossing Oil through the hair to add a little shine and moisture. Small elastics were tied three inches apart going down the hair, which gave the bubble-like effect. Once all of the hair bubbles were formed, the look was locked in place with the Power Spray Fast-Dry Finishing Spray.