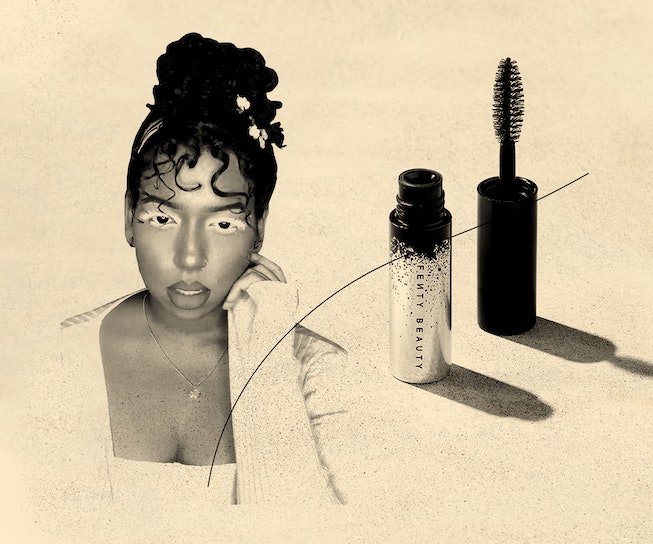 by Taylor Bryant
May 22, 2020
Sponsored
Amplifying Our Voices

If you’re over the age of 25, chances are you only just started using (or passively scrolling through) TikTok in the last couple of months. I’ve downloaded and promptly deleted it a couple of times now and each time find myself overwhelmed trying to navigate the maze of videos, entertained by the variety of content, and confused as to why all of the viral dances include the same three moves. And though I may feel like a seasoned auntie every time I visit the app, it’s easy to understand the appeal: It’s a more polished version of Vine (RIP) and satiates our need for a constant stream of entertainment in easy-to-digest, bite-sized doses.

TikTok has become an especially interesting space for the world of beauty influencing, seeing the usual long-winded makeup transformations or skin-care routines whittled down to 15-60 seconds. With Gen Zers pushing back against Kardashian-inspired contoured looks and leaning into E-girl aesthetics and Euphoria-inspired ones, the video-sharing app has given birth to a new, unconventional kind of influencer. And though the platform was only introduced back in 2017 — with its popularity rising in the past year or so — it’s already thrown a wrench (or rather a jade facial roller) into how beauty content is created and consumed.

Savannah Palacio, 20, was lured to the app by the people behind it. “In October 2019, TikTok reached out to me and asked if I'd start using it as a content creator,” she tells us. “I didn’t feel like I had the creative outlet I needed and then TikTok came along.” Seven months later, it’s quickly eclipsed Instagram and YouTube to become her favorite platform. There’s no recipe to her virality that Palacio knows of, but her videos featuring the requisite dancing and how to get crimped hair without a tool have racked up 8 million views and, earlier this year, got her invited to join Rihanna’s Fenty Beauty TikTok House. “Unfortunately, the experience was cut short because of COVID-19 but in many ways it was still beneficial,” she says. “I learned a lot about the brand and met some amazing content creators. I got to live in a beautiful house and make beauty content.”

Since her brief time in the house, Palacio has caught the eye of other beauty brands, like Orcé Cosmetics and Innisfree (one ad includes her lip-syncing along to Destiny’s Child “Bootylicious” while applying the brand’s Dewy Glow Jelly Cream). She’s managed to monetize her TikTok content through sponsorships and partnerships, which is something many users (and brands) are still navigating. Beauty bloggers like Huda Kattan, Jackie Aina, and James Charles have turned their views on YouTube and clicks on Instagram into dollars, bringing in millions of dollars and landing collaborations with brands. Those on TikTok are still playing catch-up, but they don’t seem to be too far behind. Just this past March, the first of the TikTok beauty influencer beauty brands arrived in a lipgloss-filled tube.

Shanae and Renae Nel brought the playful choreographed dance videos they created as twins to TikTok, but theirs might stand out more than others given the fact that they’re identical twins. The British sisters have amassed over 1 million followers via their lip-sync, dance, comedy, and beauty videos. Their love for makeup, combined with their fan base, led them to launch Gloss Twins. “Our dad never really agreed with us wearing makeup, as he said it would start to escalate into wearing more, which it did,” they tell us. “We have always loved makeup brands, and most specifically the focus on the lips, which is why we wanted to launch our own brand.”

The line consists of three different lip glosses: “Angel,” “Faith,” and “Patience is Golden.” Quarantine has thwarted their IRL promotional events (it’s also put a delay on shipping), but the pair are in the process of creating ads and content that will be shared on both their own pages and by fellow TikTok stars. “These will consist of swatch tests, lip transitions, and best ways to show the colors of the lip gloss,” they share.

While being able to brand yourself and your content might be the ultimate goal for some, it’s not necessarily what brings users to the app. Ariam Kidane was drawn to the platform because it was a less intimidating place to create videos than YouTube or Instagram. “TikTok has felt like a platform where beauty creators don’t have to feel the need to have the best of the best lighting and setup to succeed,” she says. Valentina D’Amelio agrees, noting: “I think it's different from Instagram because no one is trying to be perfect on TikTok,” adding that the editing process is also a lot easier since you can do it on the app.

And editing is key for the platform, given its time restrictions. Nail tutorials, hair routines, and full-face beats all come in bite-size videos under 60 seconds (that could take upwards of five hours to actually record). It’s a short window to grab someone’s attention as they scroll by, which brings us to another draw of TikTok: the ability to incorporate music.

As Palacio explains, a lot of other platforms will ask creators to use copyright-free music, which usually eliminates new or popular songs. “Instead of taking a sound away from creators, TikTok gives them the sounds or music samples,” she says. “It seems trivial but music makes a huge impact on culture. When creators are given this freedom their videos are more engaging and, in my opinion, they’re more fun to watch.” And to really hammer down on TikTok’s influence, just look at the top-charting songs at the moment. “Savage (Remix),” “Toosie Slide,” and “Say So (Remix)" all have viral dances associated with them. But while it definitely helps, not all TikTok videos require choreography or a catchy song to be popular.

At 34 years old, Julie Kyles isn’t exactly the demographic known to thrive on the platform, but she’s managed to garner a following even still with her skin care content. Her videos mostly include product testing along with some short reviews. Kyles tries to incorporate humor but usually she foregoes any extra bells and whistles. “It seems when I just talk about something and explain it rather than [adding] music, lights, and a tutorial it does better,” she says. Her most-viewed video so far (coming in at just under 9 million) includes her holding up and talking about her adoration for the Blur Stick product from Revolution Pro. It’s what Kyles refers to as one of her “on the fly” videos that are a bit scrappy, but are also the ones that tend to go viral. They’re a far cry from the curated beauty content typically seen on YouTube or Instagram. “TikTok is a lot more relaxed and lighthearted,” she says. “I think the videos of someone blankly staring into a mirror like an automaton and applying makeup are finished.”

It’s hard to say if there’s a formula for TikTok success — especially in the beauty space. D’Amelio says videos of her recreating celebrity looks or DIYs tend to perform best on her page, while Kidane says that videos where she speaks directly to the camera usually get her the most views. TikTok is a trend-driven app, so many also told me that they sometimes see what's already popular and put their own twist on it, or source ideas from their followers. With quarantine in effect since March (and still continuing in many places), global downloads of the app have surpassed 2 billion, according to analytics firm Sensor Tower. But that isn’t necessarily a good thing for those already with a hefty following, explains D’Amelio. “The fact that more people are at home also means that there is way more content on the platform and therefore more ‘competition,’” she says. And with so many new users vying for views, there’s a chance for influencer over-saturation, which has happened with apps in the past.

And while that’s a possibility, the beauty influencers I spoke to are all optimistic about their future on TikTok. They point to their authenticity, personality, and unique traits as ways they plan on standing out. For instance, the Nel twins will continue to take pride in their Christianity, and Palacio plans on continuing to show not just the good but the bad, too. “I have my ‘polished’ moments where I look, talk, and feel my best but my followers also see the not-so-pretty parts of my life,” she says. “Like how I went into anaphylactic shock last year when I ate nuts, blew up like a blowfish, and nearly died or when I fell off a motorcycle in the Philippines and had to get stitches on my face.” These are the moments that have elevated her social media presence to where it is today. “I don’t plan on changing that anytime soon,” she says. “In fact, I plan on uploading more of my everyday moments."