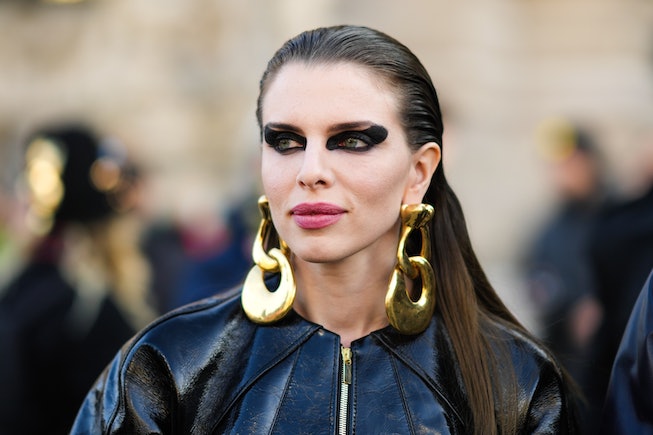 If you didn’t know who Julia Fox was before this year, chances are you do now. After a whirlwind nearly two month romance with Kanye West, the Uncut Gems star has been everywhere this fashion week. She was spotted in matching denim outfits with Kanye in Paris, opened the LaQuan Smith fall 2022 runway show in New York, and has been most recently seen front row at the Diesel show in Milan. And, she’s been outdoing herself with dramatic fashion and makeup looks every time she’s been seen.

At the end of January, Fox’s bold cat eye makeup went viral after people discovered that Kanye was the “makeup artist” behind the look. She posted “wanna know who my fav makeup artist is?” to her Instagram stories with a photo of West doing winged eyeshadow that extends all the way to her hairline. The internet was divided. Fox had been wearing versions of the heavy, inky black and smoked-out exaggerated cat-eye for many of her public appearances since then, but now—post-breakup—she has decided to switch it up. At the Diesel show today, Fox wore black lipstick contrasted with precise, stark-white winged eyeliner. She completed the look with bare-looking skin, a touch of mascara, and a matching yellow leather set, and of course black patent gloves.

It’s too early to tell if the look will go viral, but the actress is already a current meme (with a video of her circulating because of her pronunciation of “Uncut Gems” during her appearance on the podcast Call Her Daddy). Fox has been aligning herself with Diesel since the beginning of the year, wearing Diesel for many of her dates (or photoshoots) with Kanye in January. With this in mind, it’s no surprise she was sitting in the front row for the Fall 2022 debut for the brand. What seems to be a continuous surprise, however, is her makeup choices. From bold grunge eye makeup to goth glam lipstick, we can’t predict what attention-grabbing look Fox will go for next. We are, however, almost certain it will include another cat-eye.