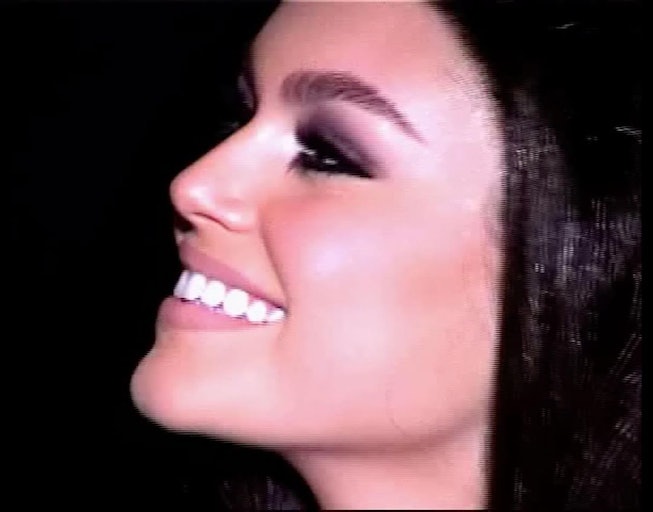 Hollywood celebs truly went all out for Halloween 2020, including this year's newest it couple, Kaia Gerber and Jacob Elordi. While some stars opted for costumes inspired by modern-day events and memes, Gerber and Elordi threw it back to the '70s, taking a costumed cue from Elvis and Priscilla Presley.

For the costume, created with the help of makeup artist, Sam Visser and hairstylist, Charlie Le Mindu, the two chose to recreate a photograph of the Presley couple from the '70s, Visser told Vogue. “Kaia had sent me the idea, as there was a specific photo of Priscilla and Elvis that they wanted to recreate,” the makeup artist shared.

Breaking down Gerber's beauty routine for Vogue, Visser shared that he took a lot of inspiration from Presley's own makeup routine. Along with the use of a lavender-grayish eyeshadow and matching lipstick, the two collaborated on an eyeliner look. "We wanted to do a variation of her famous eyeliner. We settled on this one eyeliner look of her in a car where she has a pale cream eyeliner on the inner rim of her eye and a dark black line underneath her lower lash line and upper lash line. It was dramatic and still sexy," he said.

As for Gerber's hair, Le Mindu said that he used a drag technique to backcomb the hair and create a bouffant effect. “I only used natural products, as her bouffant needed to move and to keep some softness in the hair. The handmade lace front was a must to achieve that look," he said.

Elordi's glam routine included the addition of sideburns, Le Mindu said. “For me, the most important thing was the match. I need to keep the sexy feeling, but not make it too extreme. It was easy, as they are such a beautiful couple anyway. But I married both their hairstyles with a shine, so it looked like both of them had a matching shimmer," the hairstylist told Vogue.

Her temporary stint as Presley isn't the first time that Gerber has taken a beauty inspiration from a rockstar. More than a year ago, she chopped off most of her hair, confessing that the shorter style was inspired by Kurt Cobain.