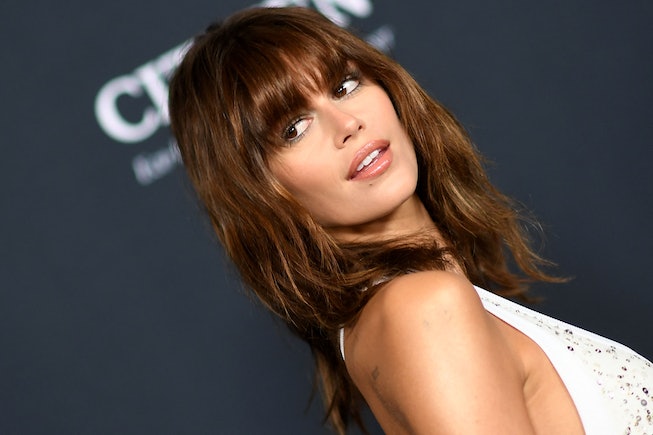 Over the past year, red hair has been cemented as the hottest hair trend of the moment. Almost every celebrity seems to be getting in on the trend, including Barbie Ferreira, Zendaya, Doja Cat, and Kendall Jenner. Now, in the lead-up to summer, the red hair dye obsession is only gaining momentum, with model Kaia Gerber joining the celebrity redhead brigade at a pre-Oscars party in Los Angeles.

Kaia Gerber is best known for having expensive brunette hair, but now the model is sporting a new glossy, auburn hair color, which she showed off with her shimmering pre-Oscars outfit. Gerber has previously proven herself to be unafraid of hair changes, including chopping her long hair into a dramatic bob in 2019 and most recently trying out wispy bangs. However, she’s mostly stuck to her signature brown shade (save for a Halloween wig or two), making the red gloss an exciting new development.

Gerber posted a photo of her Oscar’s outfit on her Instagram, where her hair tone looks far less red, so we’re guessing the new switch is far more of a subtle tone than one of her BFF Kendall Jenner’s current hair. We also couldn’t help but notice that Sydney Sweeney’s Oscar hair was far more blonde than the red tone she debuted just a month ago, suggesting that subtle amber tones and all-over glosses will dominate spring. Red hair is a famously difficult hair color to maintain, so it’s no surprise these dyes and washes have been changing and lightening almost as soon as the new color is revealed. Zendaya also opted for a blended tone at the Valentino's show this year. Regardless, a few notable celebrities including Kendall, Madonna’s daughter Lourdes Leon, and Sophie Turner were still rocking high impact red shades at this year’s Vanity Fair Oscar Party— proving you can’t go wrong anyway you want to wear the trend.

Whether it’s an amber gloss or bright red hair, it’s clear celebrities still can’t get enough of these warm tones. We’re seeing them hop on and off the red hair train with lightning speed, which means Gerber’s new hair might only be temporary. Luckily, if you’re struggling to keep up with who’s red and who’s not, we’ll be keeping track (quite literally) of who has this season’s the hottest color.