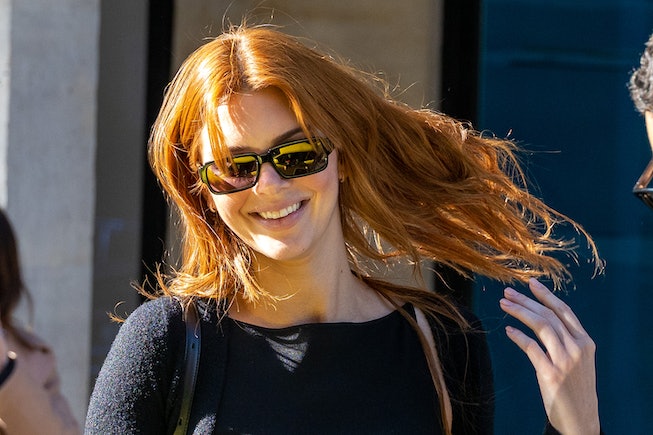 In case you’ve somehow missed it, recently it seems that every celebrity is getting in on the copper hair trend. In an unprecedented sweep, many of our favorite It girls—a lot of whom don’t often change up their look—have opted for the standout shade. Earlier, in 2021 we knew something was brewing when Gigi Hadid did a stint as a redhead for the Met Gala, Bella Hadid tried out the color via wigs, and Dua Lipa appeared in a Versace campaign with long auburn locks. Since then, the trending shade has only picked up speed, with the likes of Doja Cat starting off 2022 with fresh red hair and many following rapidly in succession. Most recently, even Sydney Sweeney switched her signature blonde for spicier tones.

While we might credit the changing spring weather to be driving celebrity after celebrity to red and copper makeovers, the strong urge to mix up your signature hairstyle after not having easy access to hairdressers might be another huge factor spurring this trend. Now, well into 2022, we’re seeing all different tones of red—from strawberry blonde, to shiny copper and rich burgundy. So, take your pick. There’s a red that’s flattering for everyone.

For your inspiration, here’s the ongoing list of all the celebrities who have tried out the hottest shade of this season, and (we’re guessing) next season, too.

Sophie Turner may have gone back to copper red initially in the summer of 2021, but in 2022, she’s now sporting a new, richer shade of burgundy.

Blink and you missed it, but in November of 2021, Pugh debuted a quick hair switch-up with bold, bright red hair. She then dyed her hair back to brown, then blonde, and brown once again, so we’re looking out for her next turn with red hair.

While Euphoria’s Barbie Ferreira officially went fiery red at the end of last year, she’s clearly a fan of the shade as she’s rocked it ever since. She debuted the new look on Instagram by calling herself “Barbie Weasley”.

Then, Zendaya became the second Euphoria star to go for red hair. Heading into the new year she dyed her hair a dark auburn. As of this March she’s been seen with a more subtle, blended color at the Valentino fashion show.

Doja Cat brought in the new year with vibrant orange hair (which she’s since changed). “Starting 2022 off right,” she posted on her Instagram.

Sydney Sweeney’s strawberry blonde look broke the internet at the beginning of March. She debuted the new look while attending the 2022 Film Independent Spirit Awards in Santa Monica, California.