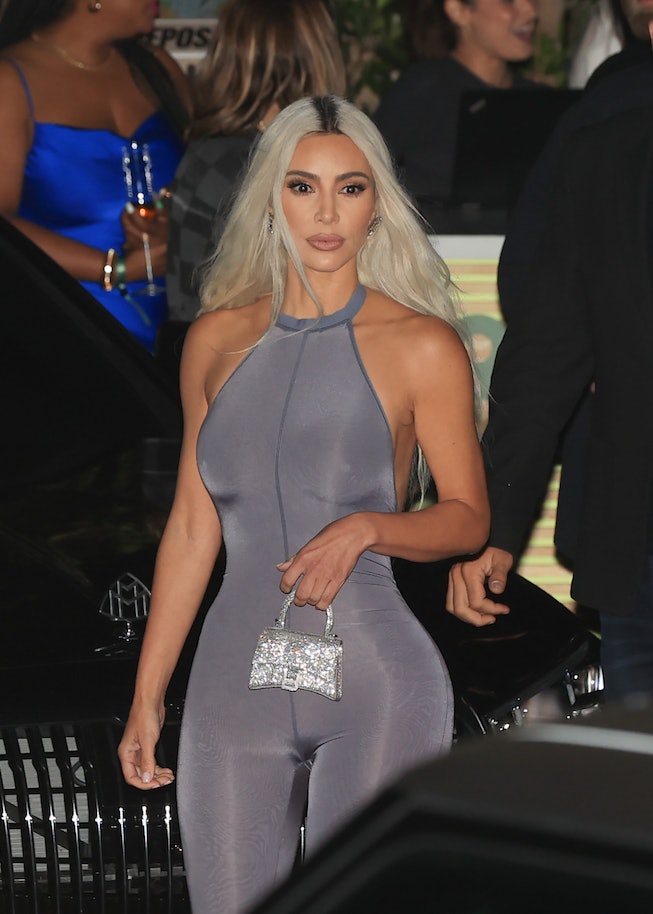 The Kardashians have more social capital than is imaginable— so much so that pop culture seems to pretty much orbit around their family When Kim and Kylie made it clear they didn’t approve of Instagram’s pivot to video content, Instagram took some notes. Now, Kim Kardashian is using her power as the ultimate influencer to bring back a hairstyle the internet claimed to have left behind.

About two years ago, teens on TikTok declared the side part dead, deeming the hairstyle peak millennial culture. Now, it seems Kim Kardashian is bringing it back, posting a sweeping side part on her Instagram yesterday with the caption “time will always tell.” In the series of photos, Kim’s new platinum blonde waist-length hair is sectioned to the side, with straightened pieces covering part of her left eye.

Kim’s new side part has already been approved by her friend and fellow celebrity Emily Ratajkowski, who commented on the post “side part 😍”. Tracy Romulus, one of Kim Kardashian's closest confidants, also commented in support, writing “Side part!!! 🔥🔥🔥” under the post. Her sister Khloe complimented her whole look, commenting “Kimberly you look amazing!!!!” It seems like a side part evolution might be stirring in the realm of celebrity.

With celebrity approval, and Y2K beauty trends making a major comeback, it seems the return of the side part has already begun, despite what some teens on TikTok have said. In fact, other celebrities, like Bella Hadid, have started rocking the style in recent months. While Kim usually wears her sleek and straight, now platinum blonde hair in the middle part, she also posted another series of photos yesterday with a side part sweeping past her futuristic sunglasses. “Yes side part,” commented hair artist Chris Appleton under the post.

Kim has undergone a number of hair changes this year so far, going platinum blonde for her Marilyn Monroe homage at the Met Gala moment and then chopping her hair into a short bob. Lately, she’s been alternating between Barbie straight, long hair and beachy waves, all with her dark natural roots. As she continues to experiment with a side part, only time will tell if it will become a regular in her hairstyle rotation. However, it’s safe to say the style is well on its way to making a full comeback— TikTok be damned.