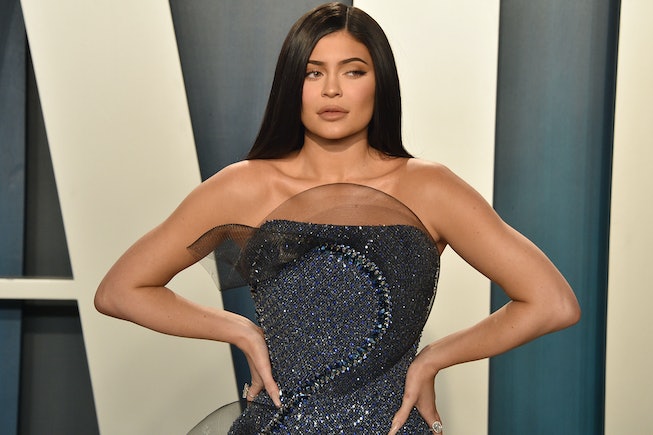 Kylie Jenner got a jump on one of the year's most hotly anticipated beauty trends. The experts have already predicted a summer filled with unconventional color and bold eyeliner, and Jenner has taken note, debuting a weekend look that featured a rhinestone-covered lid.

Sharing a peek of the glam, which she credited to Makeup By Ariel on her Instagram Story, Jenner captured a close-up of her glittery eyes. For the look, she started with a traditional eye wing on her top lid. The sharp point extended into her crease, giving almost a cut crease-inspired effect. However, it was the addition of rhinestones that gave this look some ingenuity.

Posing for the camera, Jenner showed how large rhinestones were placed in a line above her black eyeliner. The eye adhesives acted a second liner, and Jenner paired the glitz with a neutral-colored pink lip and blush. She wore her long hair parted down the middle, which kept focus on the attention-grabbing eye stones.

Summer hasn't officially started, but Jenner isn't the only one predicting a season filled with sparkle. At its recent Fall 2021 menswear presentation, Burberry added star-shaped sparkle to the faces of its models. It looks like it's time to officially start stocking up on rhinestones.

See photographs of her look, below.