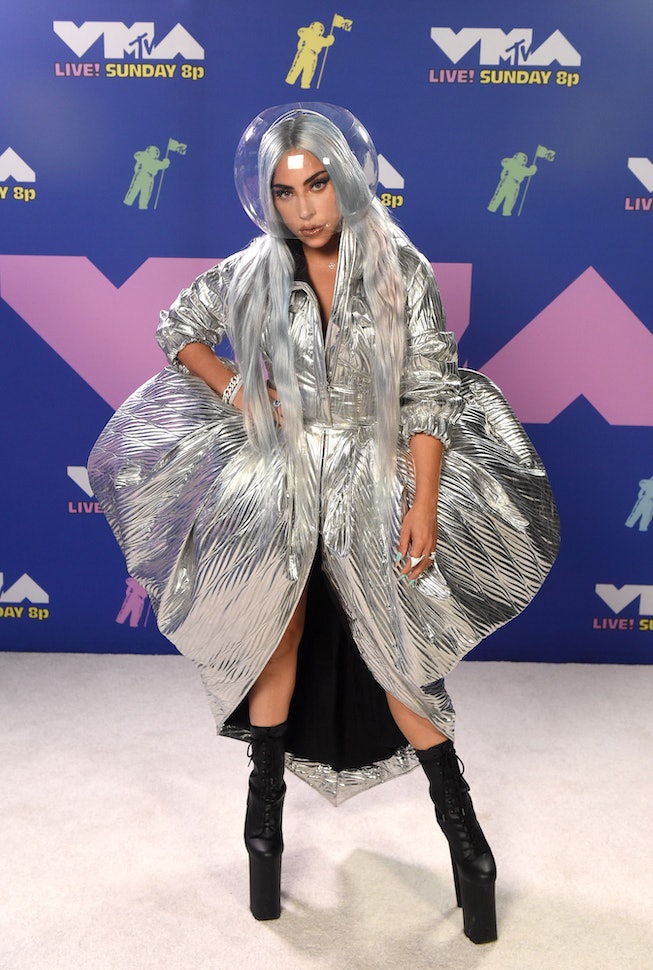 The 2020 MTV Video Music Awards certainly looked a little different this year, but even with a largely virtual ceremony, Lady Gaga managed to turn out multiple looks. Along with her collection of fashionable face masks, the VMA Tricon recipient debuted different hairstyles, and each was more colorful than the last.

As Joico Celebrity Hairstylist, Frederic Aspiras told NYLON, Lady Gaga's VMAs hair was inspired by love, and each style stood as a marker of her journey. Bringing together elements of earth, wind, and fire, Aspiras created three different looks for the evening, beginning with a sleek, straight silver style. "Lady Gaga's journey throughout the years has inspired me to create hairstyles and color combinations that encapsulate this journey. She is tough, brave, a musical genius, a visionary and overall kind human being that believes in love and kindness in the world," Aspiras said.

For the first hairstyle, Aspiras took color inspiration from the sky in the morning before the sun comes out. The sky has proved especially significant to both Aspiras and Gaga. "For me, Gaga has been there for me during a hard time in my life when my mother passed away this June. I remember one day when I was at her house in Mailbu, she asked me to look into the sky and you'll find the spirit of my mom still with me," Aspiras explained.

To create an accurate take on a sky-inspired silver, Aspiras started by mixing Joico Color Intensity in shades blue and clear to create a baby blue base. He then added hues of silver and violet to create a chrome effect. With the coloring complete, he turned to styling, and used the ghd glide hot brush to create a satin soft finish.

Adding a soft water-inspired ripple to her hair, Aspiras used the ghd platinum+ white styler on one-inch sections of Gaga's hair. He later brushed out the waves, using the ghd oval dressing brush. He finished off the look with styling spray, ensuring that not even humidity could impact Mother Monster's style.

For her two performance styles, Aspiras again turned to the heavens, creating coloring inspired by dusk and sunset. The hairstylist incorporated a fresh take on waves, and after he created a defined middle part, he used the ghd curve® classic wave wand, along with Joico Beach Shake Texturing Finisher to get a tousled style with volume. At the conclusion of styling, Aspiras added a second dose of texturing spray. This time, he separated the hair into sections with his fingers, which created a glossy, pieced-together look.

Even if your upcoming schedule doesn't include snagging multiple VMAs and dancing alongside Ariana Grande, Aspiras shared his tips for getting a similar at-home look. "Adding touches of color to your hair bring a sense of joy and freedom to oneself. It's as easy at as applying straight to your hair, or asking your hair colorist to do it for you," he said. Finish it off with some waves, and you're ready to hit the town, or the couch, with your Gaga-inspired glam.