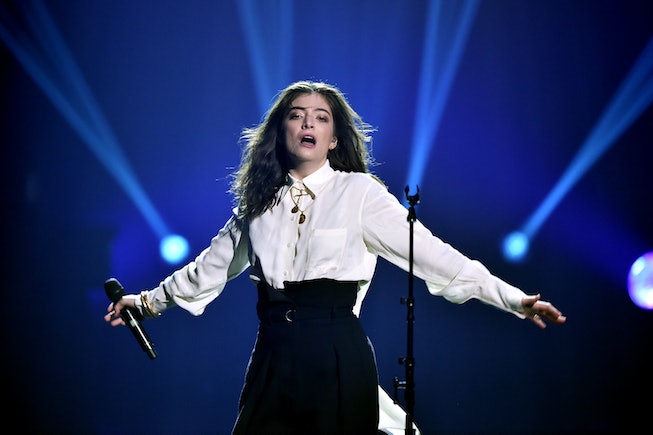 Aside from her angsty teen ballads, if there’s one thing singer Lorde is known for it’s her long, curly brown hair, often flipping it around the stage during live performances. Now, the New Zealand artist has decided to switch up her signature look this summer by going Solar Power-inspired blonde. While performing at Glastonbury Festival in the UK this weekend, Lorde revealed her new hair during her set, also wearing new more colorful clothing to match.

Lorde’s new hair color is a freshly bleached, buttery golden shade. She styled her dramatically new hair in her signature middle part, slicked behind her ears and with still-curly ends and her eyebrows also remain their naturally dark shade. Her sunnier new look also included new wardrobe styling including a lilac leotard with red tights and red ribbons around her arm and wrist. During her set, she told fans that it was “good to be back” to performing and slammed the controversial Roe v. Wade overturning on abortion.

Over the past two years, Lorde has been undergoing a rebrand. She released an unexpectedly upbeat pop album Solar Power last year and wore a sunshine yellow two-piece outfit for the single’s music video. A far divergence from her previous dark wardrobe and goth looks, her new blonde hair delves further into her new aesthetic— something some fans are calling “blorde” (a.k.a blonde Lorde). “I never knew how much I needed blonde Lorde until now,” Tweeted one fan. Another called it her “bleachElla era.”

Lorde’s hairstylist Cameron Rains also posted her new hair color, confirming it is not a wig (Lorde previously wore a blonde wig for her Mood Ring music video). “✨Blonde Girl Summer .☀️⚡️ @lorde Fresh new color by me @forwardartists,” he wrote as the caption. With Kim Kardashian and Pete Davidson also going blonde recently, the 2021 aversion from bleach and a movement towards “expensive brunette” and more natural, darker colors seems to be well and truly over. In fact, Lorde’s Glastonbury performance confirms it as not only the new hair color of the season, but as a signifier of the musician’s new era. Let there be blonde!