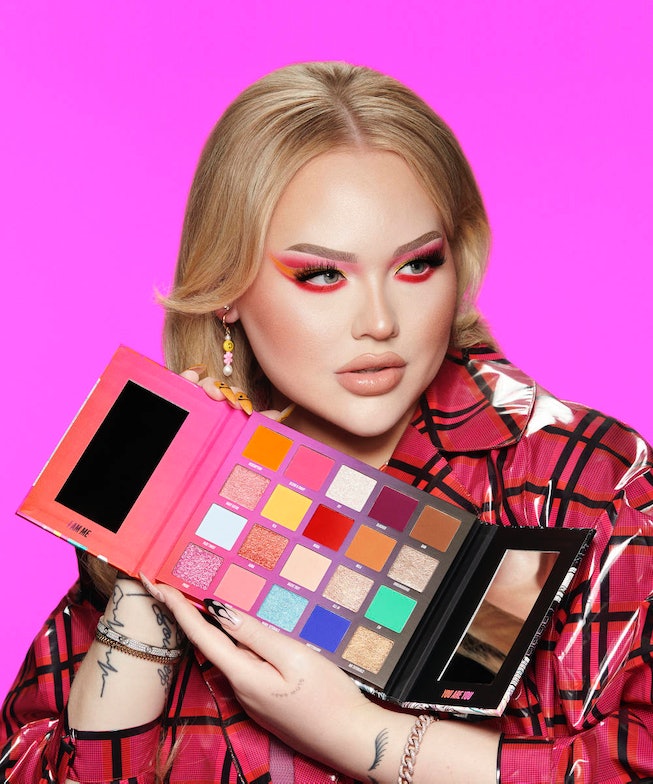 NikkieTutorials is attempting to turn her 2020 around, and that starts with the reveal of a collaborative palette that she created with Beauty Bay. Sharing the announcement on her YouTube channel, NikkieTutorials, whose real name is Nikkie de Jager, confirmed that after a "long time coming," she would release her new eyeshadow palette on August 31.

Available now only through Beauty Bay, the palette features mattes, shimmers, and duo-chromes shadows. Packaged inside a black box that features a keyhole design, the palette's interior is covered in a split panel opening. Sides are split into bright shadows and dark shadows, representing the "bright" and "dark" parts of de Jager's life. Hues were personally named by NikkieTutorials, with each paying tribute to important people, places, and events in NikkieTutorials's life. According to the YouTuber, she'll reveal more behind the naming of each shadow in a future tutorial video.

The palette, which is limited-edition, includes 20 shadows total, and de Jager focused on colorings that would be accessible for everyone. The bright side features a large mirror, while the dark side features a magnifying mirror for detailed looks.

De Jager revealed that she had intended to release the palette much earlier, but the previously planned launch date fell around the same time that a blackmailer had forced de Jager into coming out. Fearing that some would view the palette release as a publicity stunt, she delayed the drop.

News of the collaboration comes just mere weeks after de Jager revealed that she, along with her fiancé, had been robbed at gunpoint in their home. Although both were unharmed, the YouTuber makeup artist had taken some time away from social media, and later returned to assure fans that she was doing alright.

Watch as de Jager walks you through the palette, below.

NEXT UP
Beauty
Olivia Cooke’s Beauty Evolution, From Indie Ingenue to ‘House Of The Dragon’ Queen
Beauty
September 2022’s Best Beauty Launches Will Keep You Cozy And Cute Throughout The Fall
Beauty
Halloween Cat Makeup Ideas, From Easy to Inspired
Beauty
11 New Fall Fragrances To Try (That Aren’t Pumpkin Spice)